TGIF Suga Bears! I hope you had a great Emancipation Day!

I told you to stay tuned this week for more Suga highlights from Kingston Kitchen held last Saturday at Hope Gardens!

I am enthusiastic to report that the Grilled Cheese Sandwiches from Outland Hurders Creamery and Farmstead did not disappoint! There was a small change in plans from the raspberry recipe, but the locally made artisan cheeses used, Jamaican Jack and the 2-week old Crescenza were so rich. #realrich. The Cheeses were the highlight of the sandwiches as they should be, whether it was a classic Grilled Cheese Sandwich, Sweet with Caramelized Onions or a little spicy with Cilantro. Well done Outland Hurders from Manchester!

The Beef and Lamb Shawarma Fries from 2 Yutes were delish.

It was no surprise that Stush in the Bush were a hit for persons looking for a healthy option to indulge or just consistently tasty gourmet delights. They served up a wide range of options, including their Condiments made with Love and Affection, but their Fyah Grilled Pizzas, Vegan Parmesan and  scrumptious Beignets with Chocolate Sauce Passion curd were popular amongst patrons.

One One Cacao came with a unique, refreshing option of a Cacao rum shot!

Suga Tasters and Suga Babies including myself were quite impressed with newbies, All Spice Catering & Events’ Food Truck! Their Chicken & Waffles and Seafood Boil were divine. I was too full to try their Oxtail Arancini, but next time! #SugaSnaps #SugaEndorsed

Dream Bowls Ja were a hit as expected and so were the sweet treats from Kup Up Kreations!

The young ladies from Nice Cream did well recruiting patrons to taste their non-dairy Ice cream that was still so flavourful!

I am sure patrons enjoyed much more, but taking menus into consideration, feedback from Suga Tasters and my picks that did not disappoint, those were the highlights folks! If you missed the highlights from Tuesday’s thowback, check it out. How could I forget the Churros from Fromage!

Happy Tuesday Suga Bears, Suga Babies and Suga Daddies! If you missed Suga Lifestyle’s Instastories from Kingston Kitchen, you missed all the good stuff! Not to worry, I will be highlighting a few this week.

Suga is proud to say her Hit List was on point! Well done to all who participated and kudos to Leisha Wong and her Kingston Kitchen team for another fantastic staging of Kingston Kitchen. Great event for family and friends to come together.

#tbt to the crackling, juicy Pork Belly from Fromage Gourmet Market and the tender Steak Bruschetta from Cannonball Café!

Fromage were also winners with their Curried Goat Empanadas and Cannonball’s Hard (Rum) Lemonade wss a hit too!

Hope Gardens will again come alive and be transformed into a giant kitchen tomorrow, July 27th from 4pm – 11pm.

The list is out as to which of your favourite Chefs, Caterers, Bakers, Farmers, Food Entrepreneurs and Artisans will be there! There are so many great options, so how do you choose?! Stay tuned to Suga Lifestyle’s Instagram stories (@sugalifestyle) to be reminded of the top picks, but here is Suga’s guide and a few tips!

If you are a true foodie, you have hit many places on the list more than once, so give someone new a try, but be very selective.

Outland Hurders will have a Raspberry & Rosemary Grilled Cheese Sandwich that looks salivating!

● Places that are usually a hit and worth a try if you haven’t experienced their food before or you just can’t get enough of them!

The leading duo for Vegetarian Gastronomy, STUSH IN THE BUSH will be there and it is a no brainer to stop by and see what they have to offer!

● Small servings that are a bit pricey, but good

***Ladies, wear your fanny packs or a crossover bag and comfortable shoes***

Go early and travel with Cash! Enjoy with your friends and family!

Save the dates and look into securing your tickets! Season bands are on sale this year too.

All days should be a treat. If you must choose, stay tuned to your favourite Chefs and Restaurants’ social media pages and see where they will be.

Here are your JFDF Ticket Ambassadors and Outlets:

The Festival will sponsor the complete outfitting of UTECH’s demo kitchen. 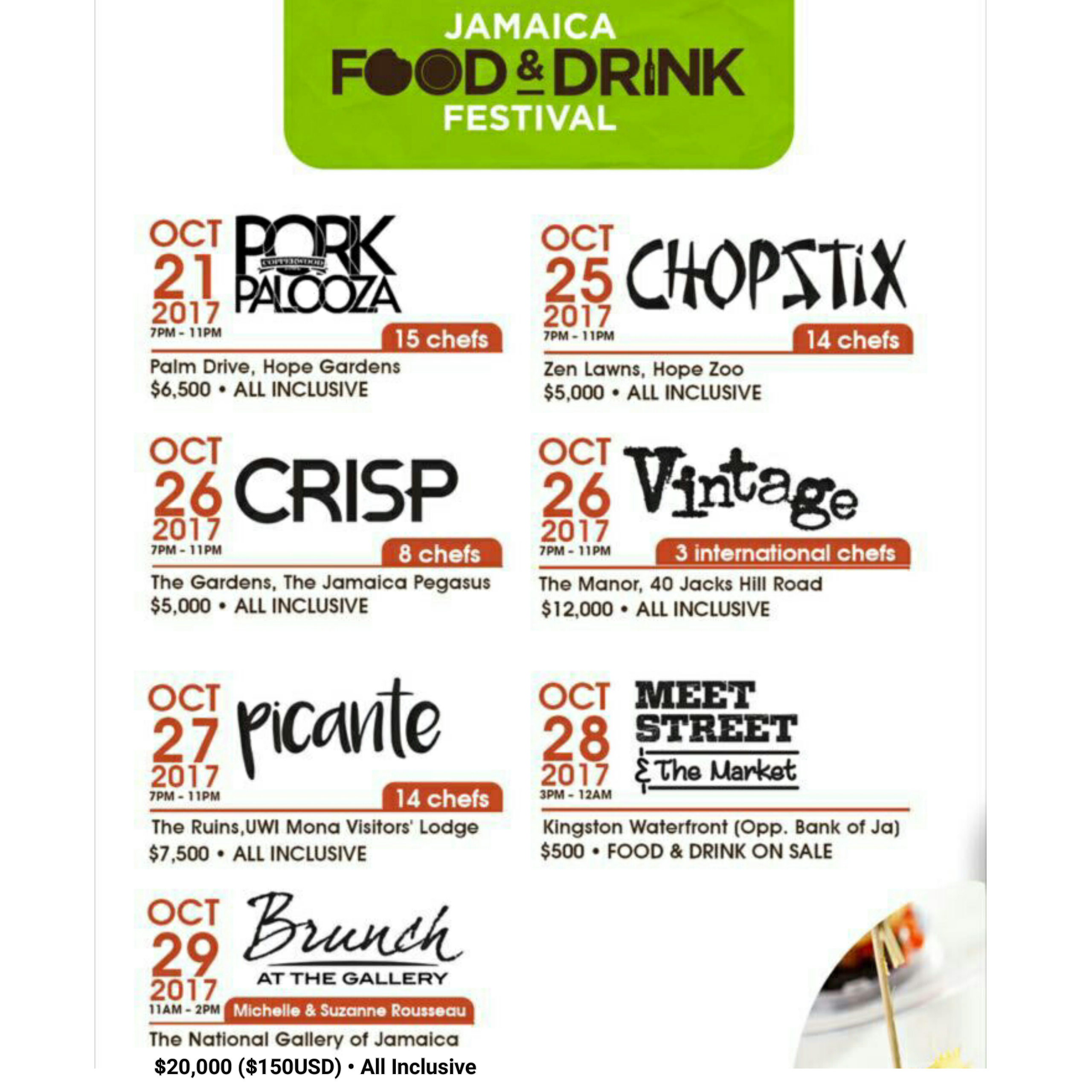 The Caribbean’s No. 1 Urban Food Festival starts this Saturday!

All days should be a treat. If you must choose, check out where your favourite Chefs and Restaurants will be on http://www.jafoodanddrink.com. Picante and Crisp are stacked with Suga’s faves.

Hope you have secured your tickets! If not, here is the information you need:

There was a Sneak Taste on Tuesday at The Steak House on the Verandah, Devon House which had its opening last Sunday. Check out a few of the highlights! 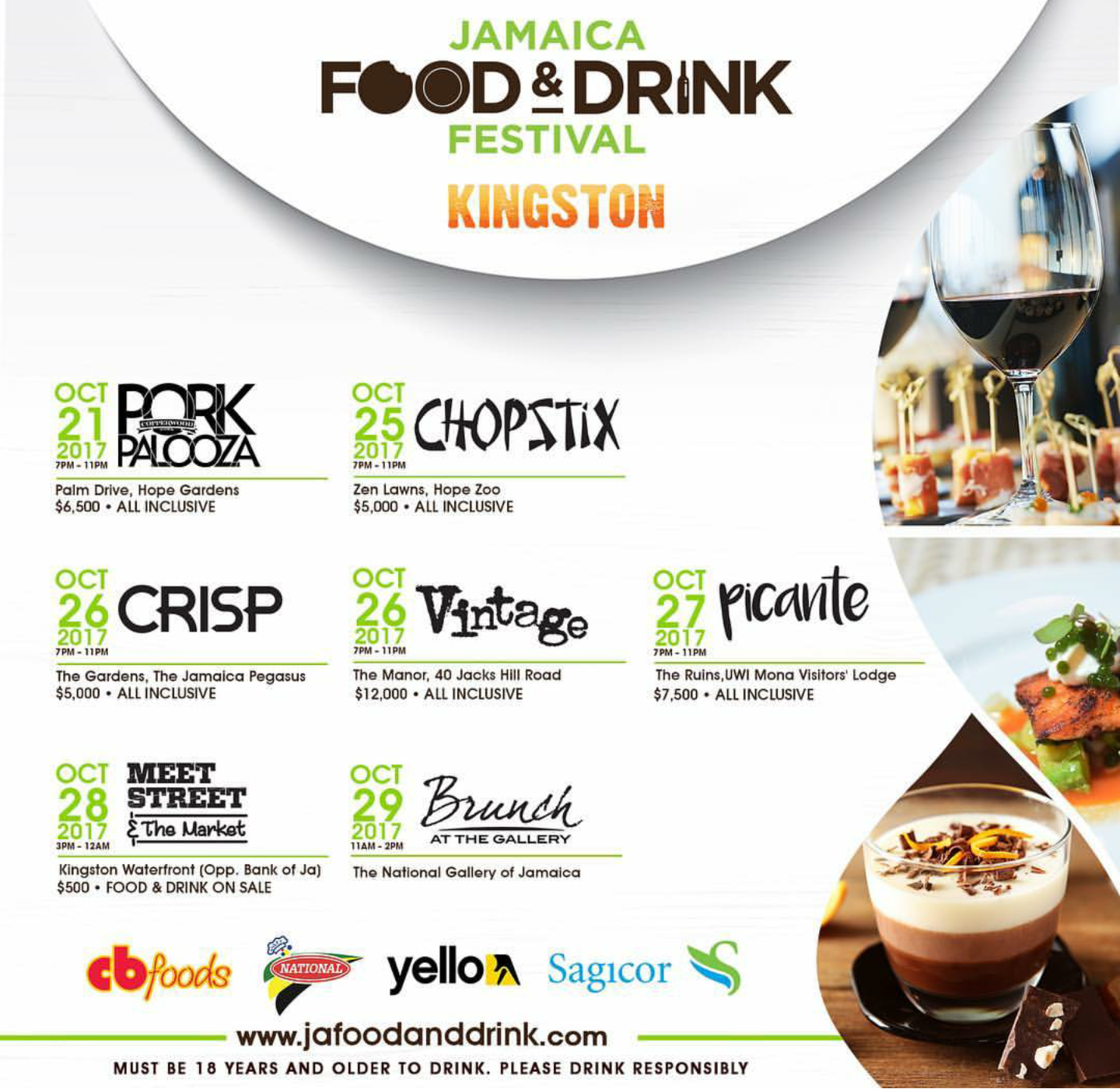 The Caribbean’s No. 1 Urban Food Festival is in a few weeks!

Check out the official line up below for Jamaica’s Food and Drink Festival that is at the end of October: 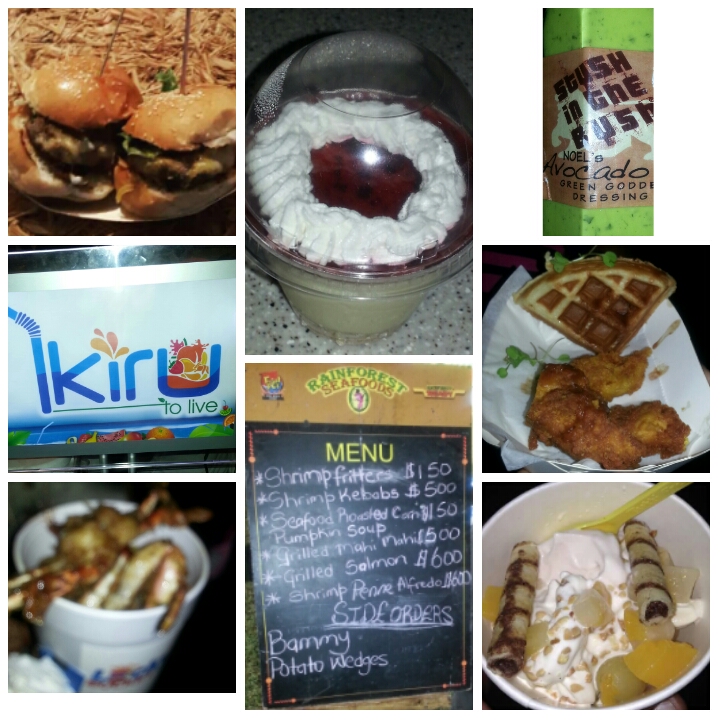 Kingston Kitchen was crawling with people when I arrived a little after 8pm last Saturday at Hope Gardens.

As I walked in I was happy to see one of my favourites, Stush in the Bush to my left, so that was my first stop. An Avocado Green Goddess Dressing immediately caught my eyes. Avocado and Guacamole are very popular right now. As a result, they were totally out of product and it was still early. A sample bottle was left. I got to taste it with a cracker and it was lovely. Now this Avocado dressing is quite versatile. You can use it on your burgers and Lisa Binns of Stush in the Bush even advised it is lovely on pasta with a sprinkle of parmesan. Yum! Remember their products are located at CPJ Market on Lady Musgrave Road.

Moving along, I was greeted by a Suga Bear who told me that Suzanne Couch‘s food was a winner. I found a long line nearby. It wasn’t clear that it was her tent because she needed a bigger sign, but clearly word spread fast especially since she has a reputation for good quality food. Her meal was $800JMD including 2 meats (choices were Panko Fish, Sate Chicken Skewers and Pork), Oriental Cucumber salad, Coconut rice, Jerk Corn and Pasta Alfredo. Not to mention the variety of sauces offered such as Mango Chutney, Pineapple Salsa and Peanut Sauce. The picture featured does not do the quality of the meal justice as presentation was sloppy with everything piled on each other. But that heap of rice actually covered a good portion of my pork. The Pork was quite fatty but everything else was delicious. The Pasta Alfredo was spicy, so the Cucumber salad was a great choice to quell that heat.

Other highlights and observations? Persons got lucky with salivating Chicken and Waffles and the Lucky Bucket overflowing with extremely peppery Seafood and more such as Crab, Lobster legs, Louisiana Sausage, Corn, Potatoes etc. The Lucky Bucket that usually costs $1500JMD incl. Tax and Service Charge was just $800JMD for the night. What a deal! Both can be found at the Lucky Strike Lounge inside the Jamzone Bowling Alley in Manor Centre, Kingston 8 on Wednesday nights from 7pm-11pm.

The Best Dressed Chicken Tent with Chef Brian Lumley had its familiar fans to see the Celebrity Chef at work and of course to taste what he had to offer. Apparently the Oxtail Wontons and Oxtail Pasta were a hit. Anything Chef Brian Lumley tends to do with Oxtail is perfection.

Reggae Jammin had delicious White Chocolate Smoothies and I also satisfied my craving for Magic Mint Lemonade from Tea Tree Creperie. On point!

The Ribs from Sheriff’s BBQ was not all that, also quite tough, but Lamb from NCR Sheep ‘sell off’! Literally.

Sliders from Fromage Gourmet Market were a hit as expected.

Potato Pudding that was $150JMD a slice from Del & Dutchy touched the right spot. They cater, specialising in Jamaican dishes and operate out of Liguanea, Kingston 6. Looks like they are worth a try so call 876-833-0727 or email delndutchy@gmail.com for more information.

New Kids on the block, Ikiru, do not have a location yet but they are on Facebook. Persons who were in need of a refreshing drink with no added sugar and preservatives were pleased with their natural Naseberry and Papaya juices. They also had Fruit salads and Fruits with Yoghurt.

Pebble’s Pastries was there. Most of us know that the only thing good from them is their Cheesecake but Suga found Cheesecake on the other side of Kingston Kitchen too! It was from Sweet World Enterprise that operates out of Portmore, featuring Molly’s Cake Cups with Cheesecake in many different forms such as Oreo cheesecake, Red velvet cheesecake, the traditional Strawberry cheesecake and the list goes on for $600JMD each. Samples were given (God bless them!) and a hard decision was made between the Oreo Cheesecake and Strawberry Cheesecake. The narrow edge went to the Strawberry Cheesecake. It was divine. Not sure if they had cute little bags to put them in, but they were not offered so a lot of persons had to remember to come back to them and pick up before they left if they were too full like myself to have that on the spot. Check out Molly’s Cake Cups on Facebook and Instagram.

Overall, food was affordable, a lot of filling food in the range of $500-800JMD and other booths not mentioned seemed to be well supported too. So I think it is safe to say the event was a success, especially for those who went mainly to socialize, have a family night, girls’ night out and to lyme. It is a pity they had to do it with the painfully annoying, loud saxophonist in the background. Until next time!