Do the Cavs have a chance? I think they can get at least 1 win. The Warriors rise to the occasion as Champions and above the level of each opponent they meet, but they are not at their best right now, They have a lot to fix offensively and defensively. LeBron James is at his best ever though and can win a game with help from at least 1 or 2 members of his team. The Warriors would have to give up though or be extremely careless to let the Cavs take this Championship away from them, whether they are at the top of their game or not. They have Home court advantage too! Game over.

Schedule for the 1st 3 games:

Unseeded Serena Williams advanced to the 3rd round of the French Open with a 3-6, 6-3, 6-4 win over no. 17 Ashleigh Barty today. Halep, Sharapova and Muguruza also moved on to the 3rd round for the Ladies.

Let Suga assist if you are not already a die-hard Brazil or Argentina fan. The ball is round, but they are not going to the final this year!

Check out GW Art’s Masterpiece, ‘Dancing on the Beat’ at its new home giving the walls a lift!

Get GW Art in your space today!

Comments: Cellar 8 has not only made changes to their space with a Deck, but their staff and management as well. Courteous, enthusiastic staff and delicious food. Service time could have been quicker and quality of drinks could have been better. Cellar 8 has always been a bit overpriced, but is no longer the new ‘it’ bar and has lost a superb mixologist. They should probably consider reducing their prices so customers can feel they are getting value for money.

I thought Cellar 8 would have been busier 3 Friday nights ago, but with the opening of new Bars such as the Sky Lounge, they seemed to have lost their Friday night buzz. However, members of their new staff were courteous and the presence and supervision of the new management was felt. Since it wasn’t a full night, I thought service could have been a bit quicker, but our server, Davion was quite attentive and kept us up to date.  Drinks were decent, but the gifted hands of their mixologust, Milton Wisdom who is no longer there, were missed. The quality of food was good, but the wrong Pasta dish was served to my husband, Randy. We wondered if the Chef was trying to sneak in the wrong dish, since it was similar to what was ordered and we were not told that the desired dish was finished. Anyhow, it was replaced soon after with my husband’s secondary dish of choice that he still enjoyed.

We were about to call it a night, but we were smartly interrupted by a purposeful temptation of a trolley full of Dessert wheeled to us to choose from.

We couldn’t pass that up. So I had the Strawberry Cheesecake and Randy had the Chocolate cheesecake. Sumptuous!

The Children from Strathmore Children’s Home showing off their Vision Books on Saturday, May 19, 2018 guided by Pure in Heart Ministries International

Strathmore Children’s Home is located in Spanish Town, St. Catherine and provides care and protection for children 13 years old and under.

Pastor Ryan prayed for the children and quality time was spent with them. Vision books were created based on a motivational talk given to them.

A child from Strathmore Children’s Home being assisted to make her Vision book by Ms. Sheena Taylor, member of Pure in Heart Ministries International

They were also given the tools to use their minds and creativity to decorate boxes with their names for storing inspiring and motivational quotes.

Projects like these often go unmentioned or unheard of because they may be considered trivial and are conducted by such selfless persons that are pure in heart and believe in service above self. However, they have a huge impact on those they have taken the time out to assist and these projects inspire others to make an impact and change as well.

Kudos to Pure in Heart Ministries International and their team for their charitable services. Our Children are our Future.

Church Services: Sundays at 9am and Wednesdays at 7pm

NBA PLAYOFFS:
EASTERN CONFERENCE FINALS
LeBron James makes it to his 8th straight NBA FINALS! He was sensational last night once again with 35 points in 48 minutes.

WHAT HAPPENED besides LeBron?
The Celtics missed too many shots in the last 4 minutes of the game. They lost their lead of the game in the 3rd and still trailed in the 4th after a good start in the 4th to tie the game. Kudos to rookie, Jayson Tatum who played extremely well. He scored the 2nd most points by a rookie in NBA Post Season history and was just 2 points away from the record. There was no Scary Terry though. He was 0 for 10 from the 3-point line! Celtics missed that firepower and their inexperience overall showed. LeBron and the Cavs capitalised on that to quickly jump to a 10-point lead.
CAVS won Game 7, 87-79.

Now that LeBron James has carried the Cavs to dominate a weak Eastern Conference, who will they meet in the West? As James peaks toward the end of his career, this NBA Finals will be his true test.

Rockets versus Warriors tonight in Houston for Game 7 at 8pm!

CP3 for the Rockets with a hamstring injury, Looney (toe) and Iguodala (knee) are still questionable for playing in tonight’s game.

Suga thinks it is a toss-up. Whoever wants it most will win, but Houston being at home with ringless leaders have the edge to win.

Don’t forget that the Sweetart Bake Expo will be at The Jamaica Pegasus this Sunday!

Our Jamaican Bakers’ Skill and Creativity will be put to the test! There will be a Cake Decorating Challenge for the Bakers with the theme, ‘Movie night’, a Pre-decorated Cake Competition with the 4 themes, Wedding, Cartoon, Topsy Turvy and Fast Food. For persons who would like to have fun and are also inspired to be like our Bakers, there will be Cake Decorating classes.

Check out these elaborate Cakes from some of our Jamaican Bakers!

Children under 12 are FREE!

New Restaurant, Summerhouse at The Liguanea Club, New Kingston is Opening to the Public sooner than you know!

Suga’s Ratings for I Love Paella

NB. Ratings fill 5 stars maximum and the criteria has been altered since it is a Pop-Up Kitchen

Rich flavours were present throughout the dishes. Pleasant, courteous Chef. Superior service, speed and food quality. Serving amounts were adequate for a reasonable cost, as some meals were shareable. Chef Enric is from Valencia and he represents! Suga and friends enjoyed authentic Valencian Paella.

From what I know, Chef Enric Escriva has been on the Jamaican culinary scene since January last year. Until he gets a suitable spot for his restaurant, he has been catering and doing Pop-up kitchens. I Love Paella is currently and temporarily in what used to be Cafe Nita’s space on Phoenix Avenue. So there is limited indoor and outdoor seating. The latter is the more comfortable choice with the hope of good weather.

I met two of my girlfriends for lunch around 1pm. Chef Enric greeted us politely and took us through the menu in which all prices included G.C.T. They did not have a Drinks menu, but basic drinks were available including wine, a simple white and red. We ordered a bottle of Chardonnay. They also have a Party Menu for groups.

The starters ranged from $850 – $1400JMD in cost, with some being shareable. Starters included Calamari, Tortillas, Croquetas and more.

We shared Bravas, a classic Valencian dish made from Fried Potatoes, a spicy brava sauce and allioli.

We went specifically for Paella so that’s what we had. The Paellas are done to order, cooked and served in the traditional Paella pan that can serve 2 – 3 persons. However, prices shown on the menu are per person ranging from $2250JMD for the Vegetarian Paella to $3250JMD for the Seafood Paella with black rice from the squid’s ink.

That Seafood Paella was as delicious as it looks with just the right amount of spiciness.

They don’t just serve Paella though. There are other mains available such as larger Tortillas and Empanadas ($1600JMD), Calamari sandwiches ($2400JMD) and Mediterranean salads ($1900JMD).

After all that spice, our palates demanded a bit of sweet. We completed lunch with Churros and Dark Chocolate. Fantastic ending to our lunch.

I am sure it will be appreciated.

Both clubs are part of the non-profit organization, Rotary International. Good work Rotarians and Rotaractors!

Happy Labour Day Suga Bears! What’s your Labour Day Project? Have a productive day, whether at home or in the streets. 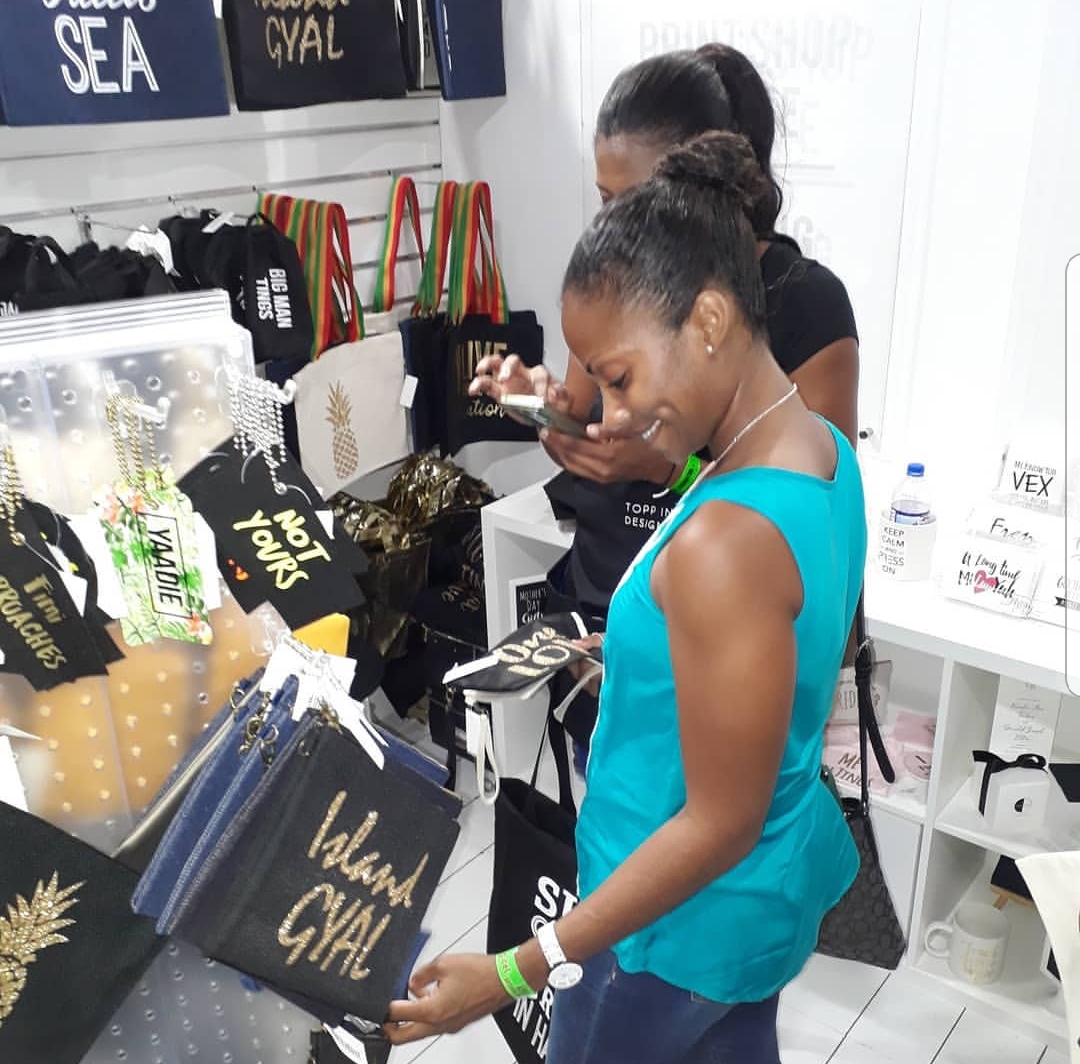 Gabby a.k.a Suga from Suga Lifestyle buying local at the Topp in Designz booth at Expo Jamaica on Saturday, April 21, 2018

Topp In Designz may be familiar to quite a bit of people by now, but the more events they go to, the more people know about them and the more they are inspired to expand their production line.

Topp In is a Design studio that designs modern and handy Pouches for Men and Women, Beach bags, Thermoses, Wine bags, Decorative Stones for the garden, Mugs, Luggage tags and more. They have something fit for every occasion.

Their Beach bags are fairly new and some were produced for Expo Jamaica about a month ago. Suga loved them. I definitely had to get my ‘Sun, Sand and Rum in Hand’ Beach tote!