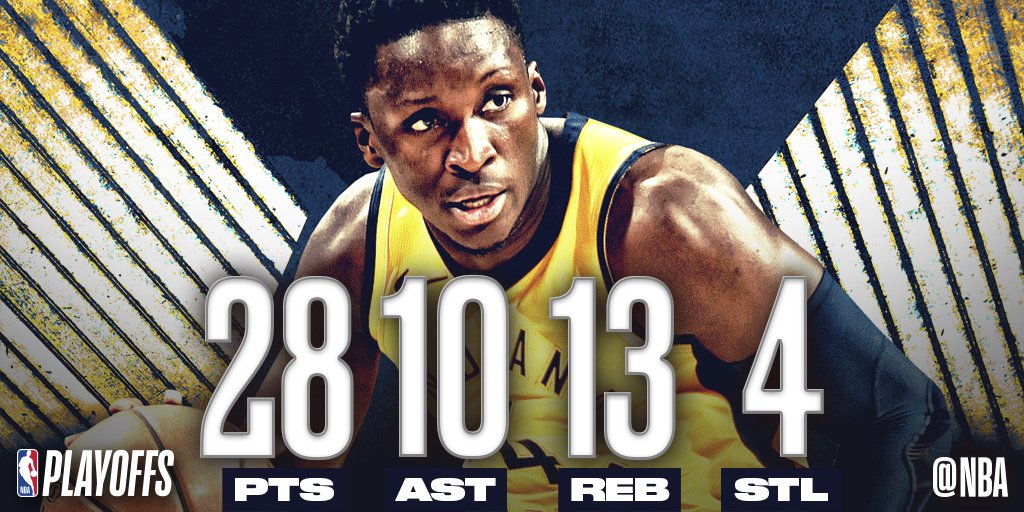 Last night was a blowout! Oladipo and the Pacers pushed a Game 7 with LeBron and the Cavs.

This is the first time LeBron James has faced elimination in the first round of the NBA Playoffs. Will he join Westbrook?

Kyle Lowry and the Raptors took care of business last night, routing the Wizards and sending them home. They play the winner of the Cavs-Pacers series next.

Rookie, Donovan Mitchell destroyed OKC! Westbrook put up 46 points but they were null and void without any help from Paul George, Carmelo Anthony or anyone else.

Mitchell was also without the help of Rubio, who had to leave the game with a nagging hamstring injury.

Spectular show put on by Mitchell. He gets Rookie of the Year over Ben Simmons for Suga.

Rubio may be out for 2 or more weeks, which is bad if they have to play the #1 seed in the West, the Rockets.

LeBron James finally got that game-winning clutch shot when it counted versus the Pacers Wednesday night, carrying the Cavs to a 3-2 lead.

Suga predicts the Pacers will be eliminated in Round 1 and the Cavs will meet the Raptors next if they don’t choke versus the Wizards.

The Rockets destroyed the Timberwolves and sent them packing. They play the winner of the OKC-Jazz round next!

The Warriors sent the depleted Spurs team home. They went home with a fight though. No surprise there. Warriors play the New Orleans Pelicans with Rajon Rondo and Anthony Davis tomorrow night at 9:30pm!

The 76ers sent Dwyane Wade and the Heat packing in fine style. They await the winner of the Celtics-Bucks series.

The Celtics and the Bucks are all tied up! Watch their Game 7 tomorrow at 7pm. Suga picks the Celtics to move on. 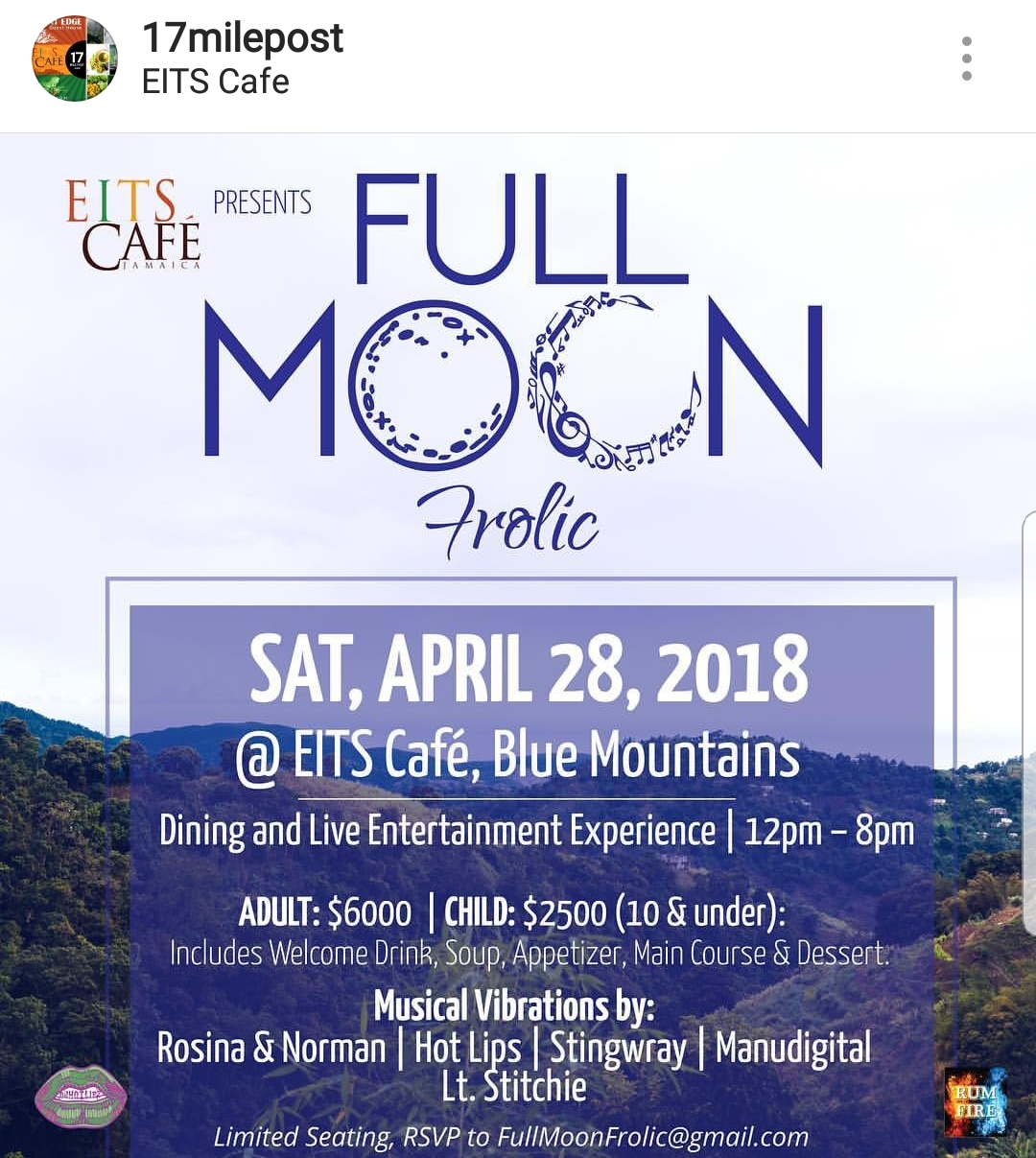 Limited seating, but great opportunity to enjoy live entertainment and dining in the Blue Mountains. Book your spot if it isn’t too late! #SugaEndorsed 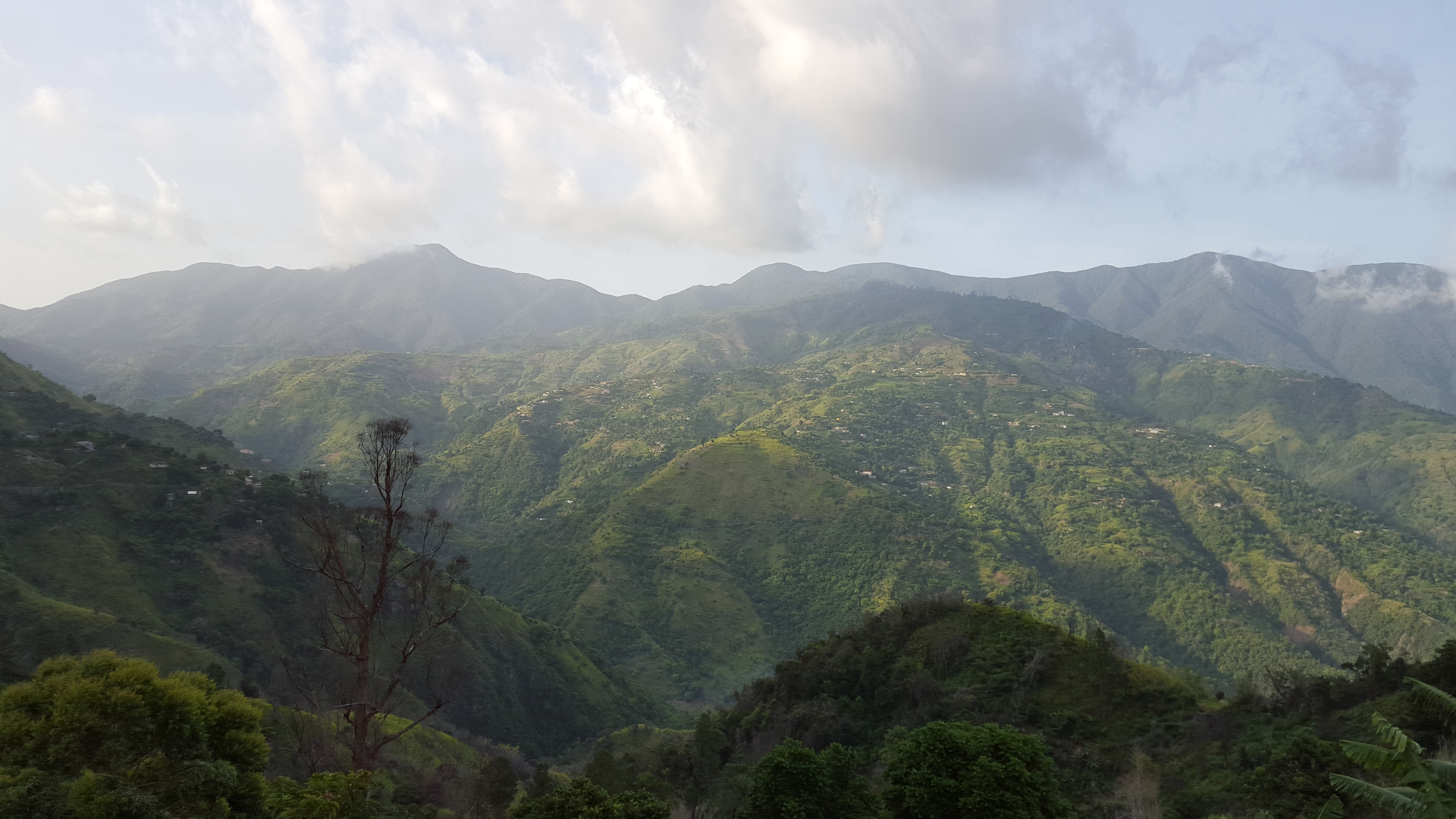 Impressive views and well maintained grounds. Décor could incorporate more of the cottage theme though. Menu had a sufficient variety of items. There was a tasty selection of Appetizers such as Popcorn Shrimp and Chicken, encouraging one to look forward to the main. However, the main dishes disappointed. Ribs were overcooked, failing to slide off the bone and the Pork Chops that lacked seasoning had a Guava glaze sauce, which did not meet its elaborate description to complement them. The Mac and Cheese was said to have ‘too much Tasty Cheese’ as it was too heavy. They then failed to redeem themselves with Dessert for a good end to the meal. The Very Berry Blue Cheesecake was said to be just blue and wasn’t ‘very berry’ at all.

Service and speed were commendable, but the quality of food did not meet the standard required for the Restaurant to be worth the drive.

Blue Ridge Restaurant and Cottages has been known to be an enjoyable place for myself and others to visit for savoury food with a view. Suga hopes this bad experience was an anomaly. If not, I hope they get back on track soon. Afterall, they are on too steep a mountain to take such a fall. 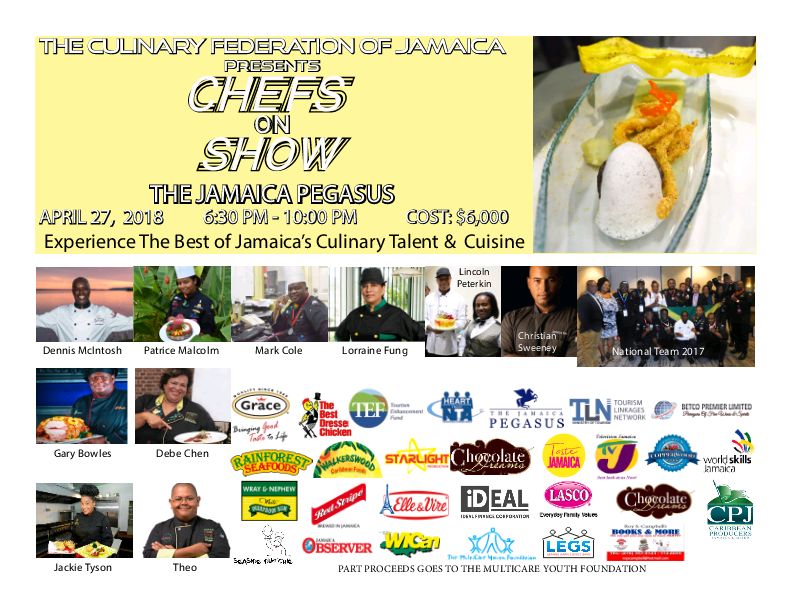 Chefs on Show will be this Friday at The Jamaica Pegasus. Tickets cost $6000JMD for you to experience the culinary talents of our very own Jamaican Chefs. Some Suga endorsed Chefs such as Mark Cole, Christian Sweeney and Jackie Tyson will be there too.

Get your tickets today! 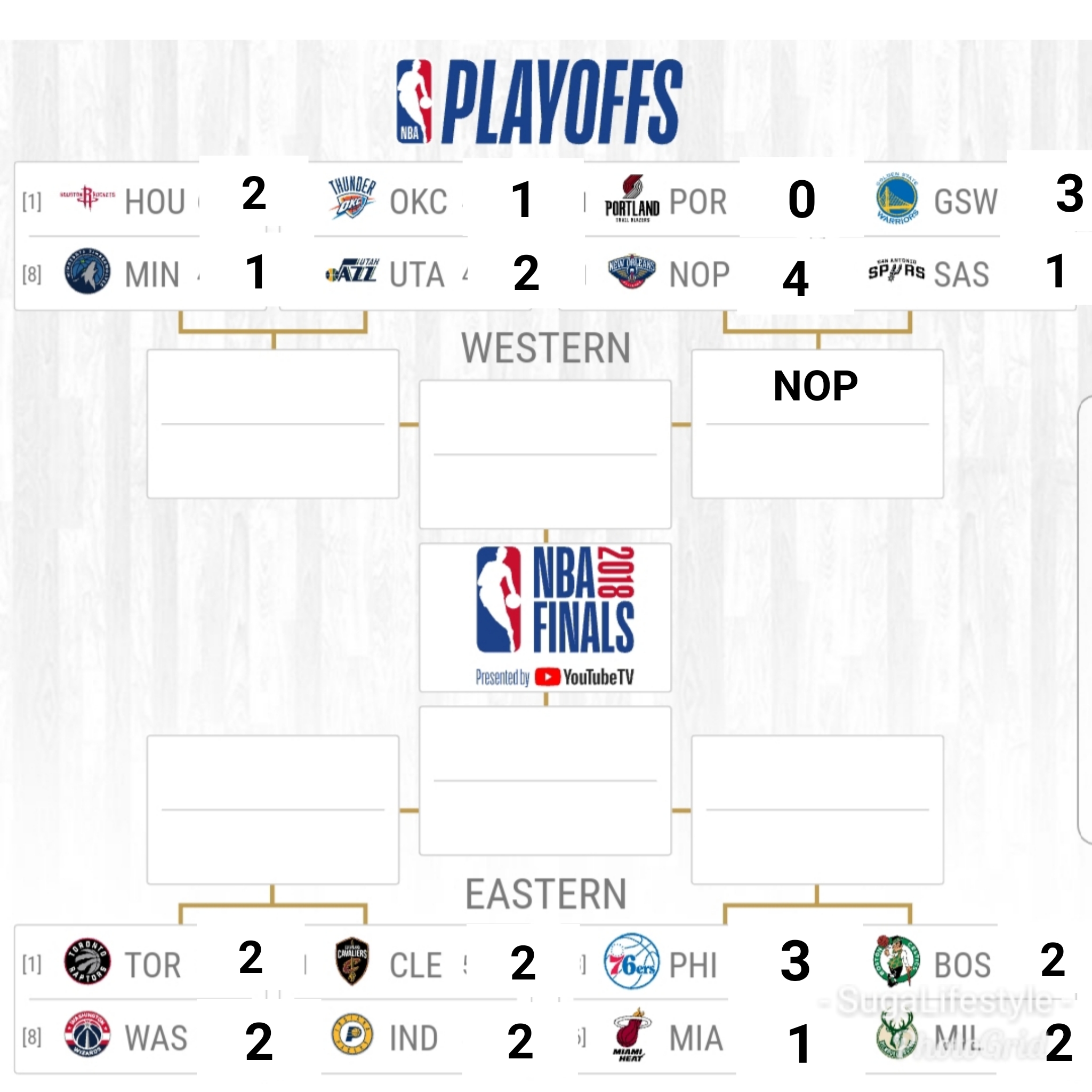 LeBron James has managed to bring back the Cavs versus the Pacers. He had two big games scoring 46 and 32 points. The series is now drawn 2-2. He surely can lead the Cavs to beat the Pacers, but if the Pacers stay focused and make shots when it counts and they really want to beat the Cavs, they can. LeBron has sent home the Pacers for the past few years, can the tables turn on him this time? Either way, Suga doesn’t see LeBron James in the NBA Finals this year.

The Wizards came back versus the Raptors in a heated game last night to tie the series at 2-2.

Giannis and the Bucks have been on a roll versus the Celtics coming from 2 down to tying the series 2-2 yesterday.

Anthony Davis and veteran, Rajon Rondo beat the NBA odds, leading the New Orleans Pelicans to sweep the 3rd seed in the West, the Portland Trail Blazers! They are likely to meet the Warriors next for a much harder series.

Ricky Rubio of the Jazz scored the 1st triple double for Utah in the Playoffs since John Stockton! Rubio’s impressive performance helped the Jazz take game 3 and go up on OKC 2-1 in the series. Westbrook of OKC said in a post-game interview that he is going to shut him down!

After a few close games, the Timberwolves finally got a win versus the Rockets. The Rockets are still up 2-1 in the series.

The highlight yesterday was the San Antonio Spurs playing with pure heart without their beloved Coach Popovich, whose wife died. The Spurs avoided the sweep by the Warriors and routed them 103-90. Aldridge and Rudy Gay played well for the Spurs, but the man responsible was none other than 40-year old Manu Ginobili with 16 points! Manu is now 3rd in all-time Play off 3-pointers made with 321, just passing Reggie Miller. Ray Allen still leads with 385, followed by LeBron James with 337.

With last night’s 132nd win, Manu with teammate, Tony Parker are the winningest duo in NBA Playoff history, taking over from his past teammate, Tim Duncan who was also paired as a duo with Tony Parker.

They head back to Golden State for Game 5, where it is likely that the Warriors will wrap things up. But it was a good win for the Spurs! 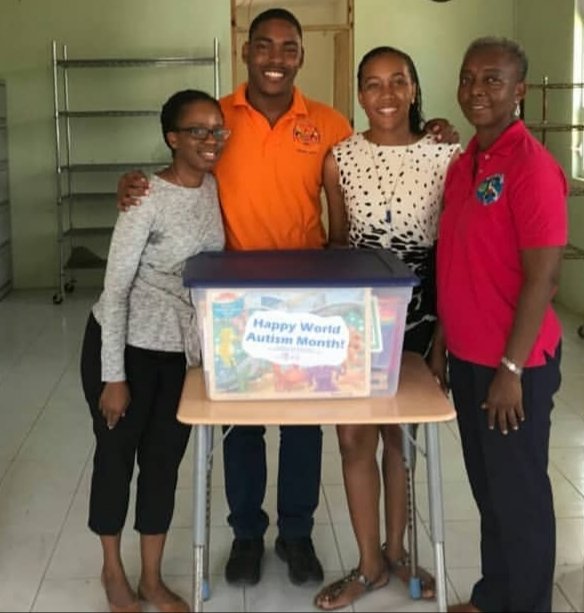 District 7020 Rotaract Representative, Jevaughn Rhymer and members of his District Board handing over Learning aids to the BVI Autism Centre last Thursday, April 12.

Rotaract District 7020 (RD7020) is a non-profit organization, which is the youth arm of Rotary District 7020 and by extension, Rotary International. RD720  has clubs across the Caribbean such as Jamaica, Cayman Islands, St. Maarten (Dutch), St. Martin (French), Haiti, Anguilla, The Bahamas, Tortola (B.V.I), St. Thomas (U.S.V.I) and the Turks and Caicos Islands. In honour of Rotary’s World Autism Month, Rotaract District 7020’s Representative, Jevaughn Rhymer and members of his District Board handed over learning aids to the British Virgin Islands (BVI) Autism Centre last Thursday, April 12.

The items were purchased from the donations given by Rotaract District 7030 (including clubs from St. Kitts & Nevis, Trinidad & Tobago, Guyana, French Guiana and Suriname) after Hurricane Irma hit the island.

Rotaractors will continue to work with the Autism Centre and assist with post hurricane revival efforts. 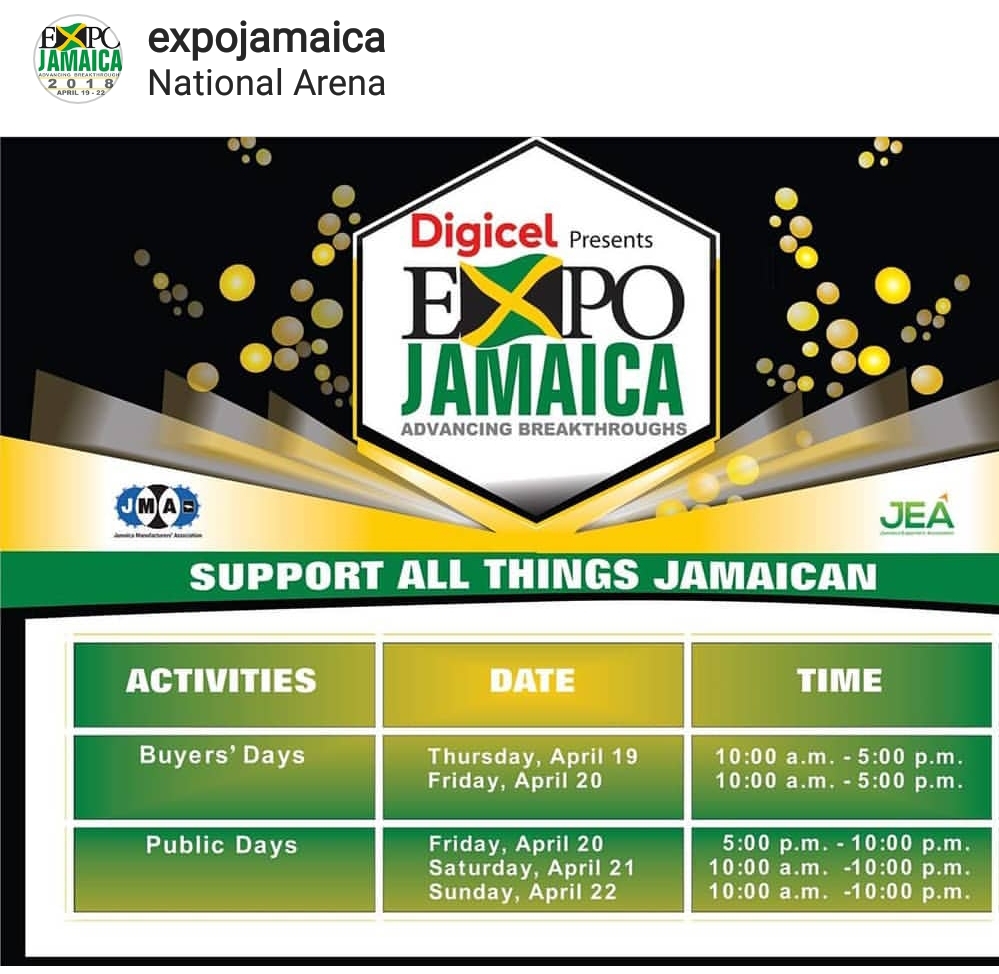 The Caribbean’s largest showcase of All Things Jamaican started yesterday and will run until this Sunday, April 22 at the National Indoor Sports Centre and Arena.

FREE Park and Ride service will be offered by JUTC on Saturday and Sunday from King’s House to Expo Jamaica.

***Admission for Public Days Only***

Exquisite ambience and scenic view with hummingbirds in full flight while you wait for your food made fresh to order.  Menu items were quite reasonable in cost. My husband and I had the Jamaican breakfast that included Ackee and saltfish, along with sides of our choice. I thought that they needed more filling in their Fritters, but their Ackee and other sides such as boiled banana were spot on.

The father-daughter duo who run EITS, Michael and Robyn Fox, were hospitable, making us feel right at home.

Their high standard as a must-stop on the Blue Mountain culinary trail has been kept. Suga snaps for EITS.

Stay tuned for 2 spots that have gone downhill on the Blue Mountain Culinary trail for Suga Bears next week!

Since the start of the year, Suga has made an effort to reach out to more persons on Facebook to increase joy and awareness about what Suga Lifestyle is all about.

Suga has reached out with various posts to inspire, educate and entertain via What’s Hot in Sports, Restaurant Reviews and Rantings, Health and Fitness, GW Art, Charites, Recipes and more!

Stay tuned for more exciting things from Suga this year and thanks for reading, following, liking and keeping up!