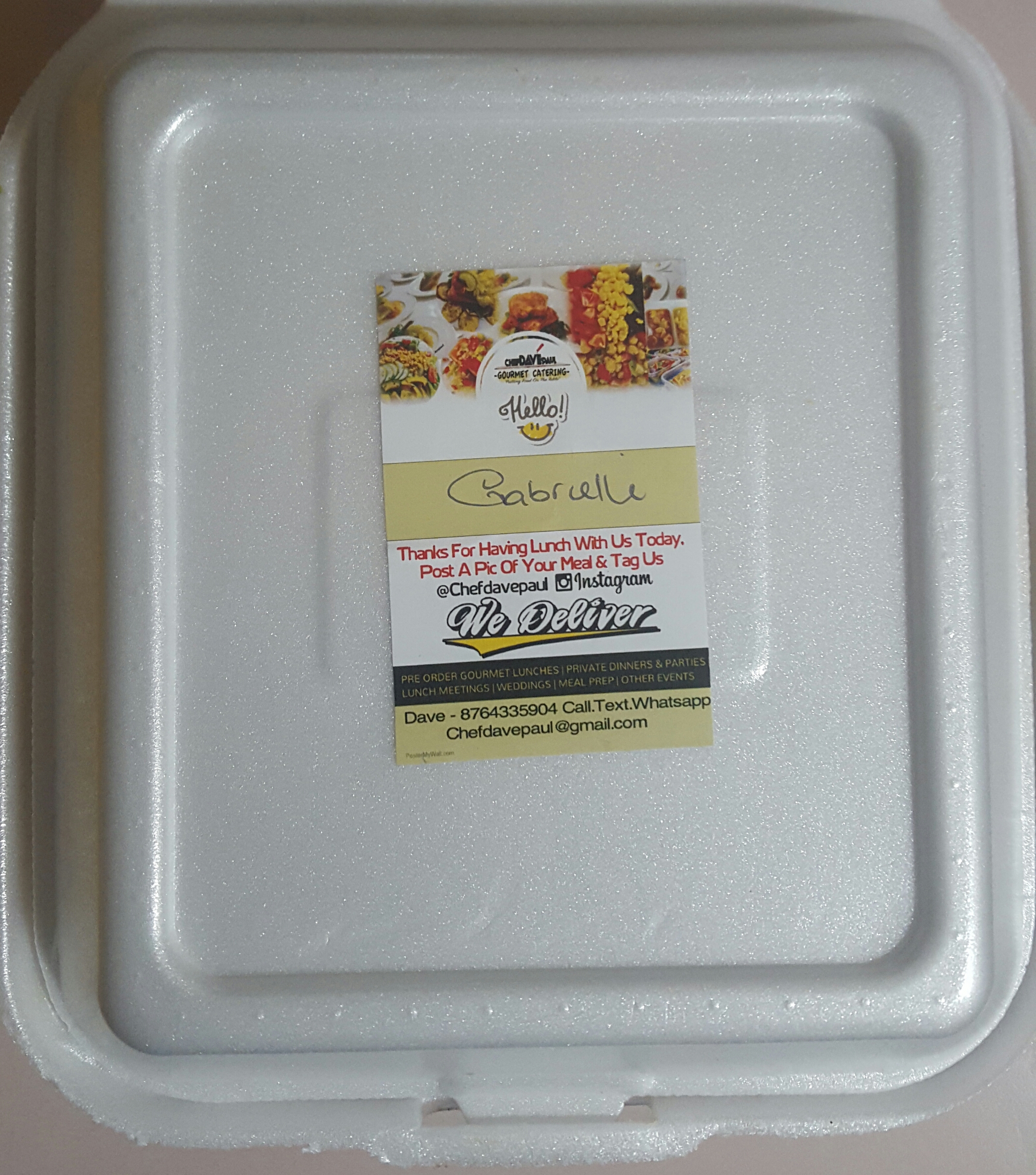 I regretfully admit that I have had Chef Dave Paul’s contact information and Lunch menu from last summer and just decided to use it yesterday. Why? It’s so hard for me to decide what to eat, much less from the day before. I am also still working or just settling in by the time the order is to go in.

Last year, Lunch orders had to be in by 10pm the night before and currently, the deadline is even earlier. Orders need to go in to Chef by 8pm the night before. I am sure this is how he keeps his system structured, so it’s either you make it work for you or you don’t.

A set menu is used daily, which is updated from time to time. Customized lunch orders are welcomed. Customers have options of Seafood, Chicken, Pastas, Wraps, Salads and Vegetarian meals.

It is stated that Punctual delivery is not guaranteed. So even though I requested an 11:30am delivery, I stated that it could not be later than 12 noon. My lunch arrived at 12 noon.

Presentation and branding were impressive. Communication was also effective.

Chef Dave Paul’s Oven Roasted Chicken with Jerk BBQ sauce, a side of Sweet Potato and Pumpkin Mash and side Salad – $900JMD inclusive of Delivery in Kingston

I asked for light Jerk BBQ sauce and got just that. It gave the tender and well-seasoned Chicken a zesty flavour. The Sweet Potato and Pumpkin Mash was satisfactory. Sometimes healthy is boring and I took one of the healthier side options, so didn’t expect much from it as a side. The raw vegetables in the side Salad were fresh and I loved the added crunch and sweetness from a few cuts of gimbilyn (a.k.a carambola/star fruit) and raisins.

To top things off, lunch came with a moist towelette. I am guessing that Chef Paul knows that his Chicken was saucy and finger-licking good.

***Orders must be placed the night before by 8pm*** 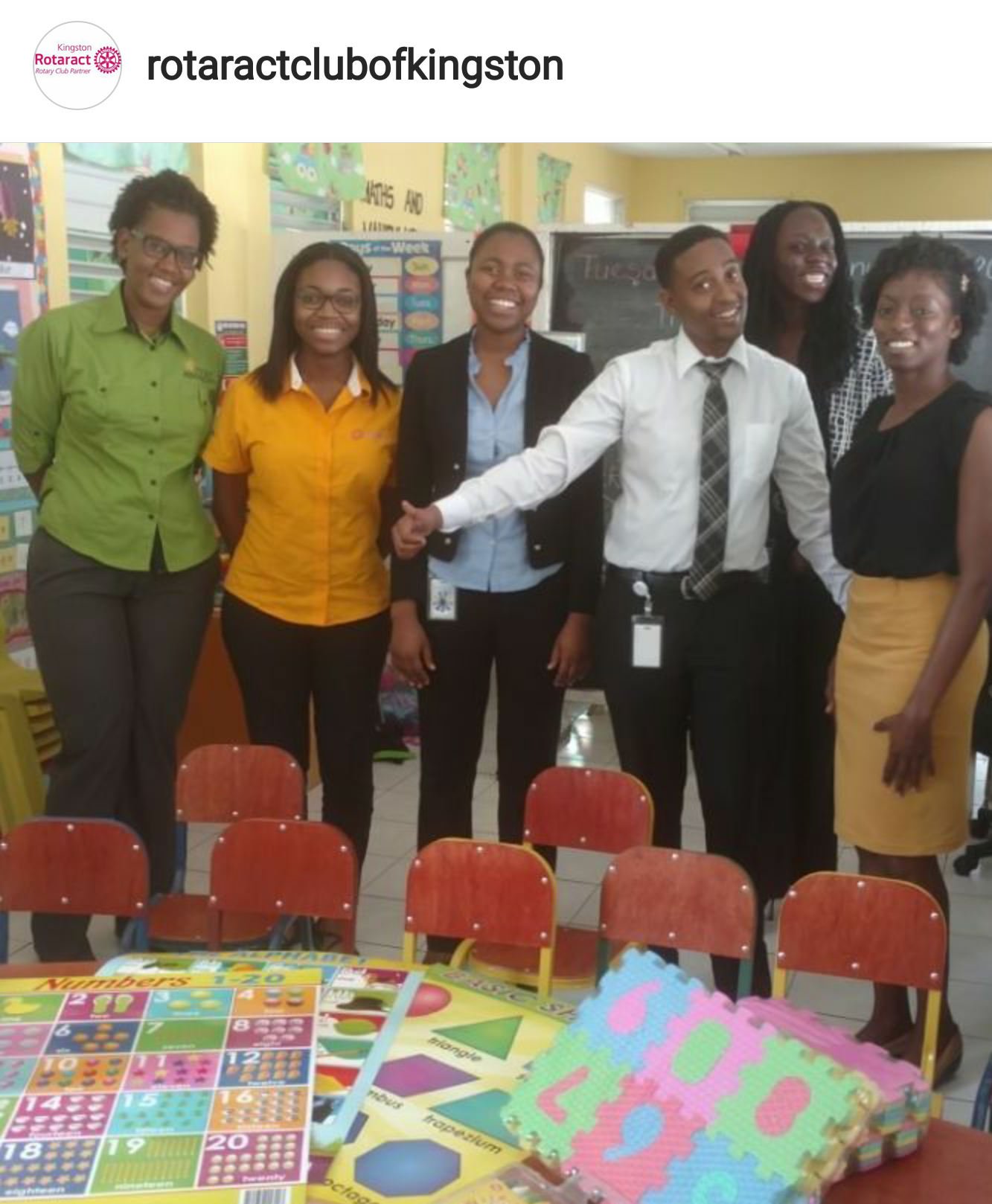 Representatives of the Rotaract Club of Kingston amongst desks, chairs and learning aids that their club donated to the St. Barnabas Basic School

Knowing that 12 standards matter, the Rotaract Club of Kingston completed the first phase by donating chairs, desks and learning aids to the St. Barnabas Basic School of Fletcher’s Land on January 30, 2018.

Kudos to the Rotaract Club of Kingston and the Early Childhood Commission for helping to develop Jamaica’s early childhood education!

Ms. Sophia-Ann Williams, Principal of St. Barnabas Basic School being presented with learning aids by the Rotaract Club of Kingston on January 30, 2018

How can you join or assist and keep up with the Rotaract Club of Kingston? 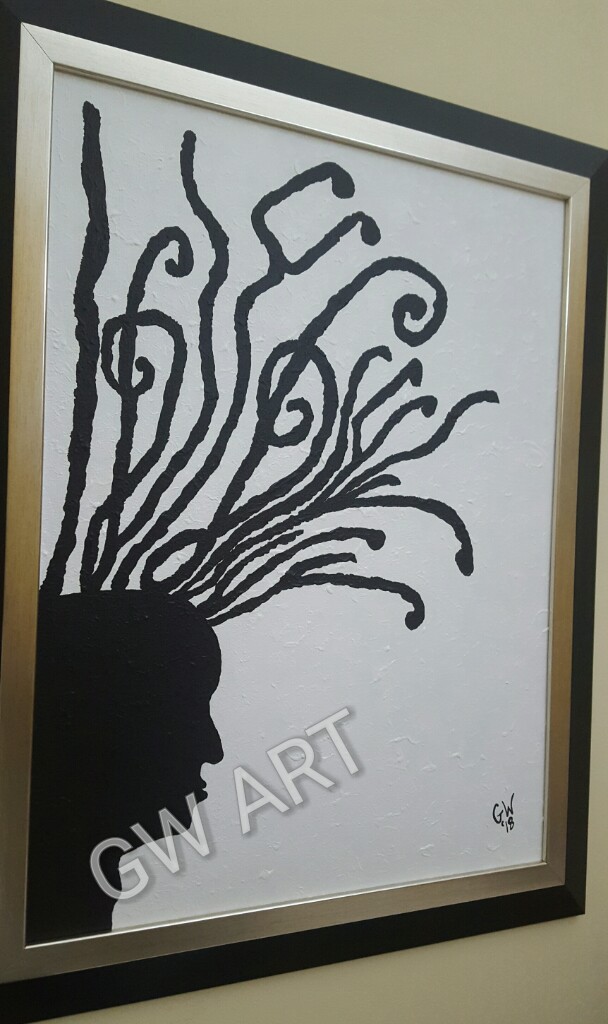 GW Art has found a happy home once again!

‘Natty Music 2’ was painted by Gabby from GW Art last week as a commissioned piece from the GW Art original ‘Natty Music’ that had ‘Rasta’ colours in the background, red, yellow and green. Some acrylic texture was added to this black and white version as well!

Jamaican men with dreadlocks are sometimes called ‘natty dreads’. From their youth or as early as in the womb, music is already a part of them because it is a part of their families. As they mature, some become songwriters, as creative words are used to make natural, mystical music flow from their head.

Get GW Art in your space today! 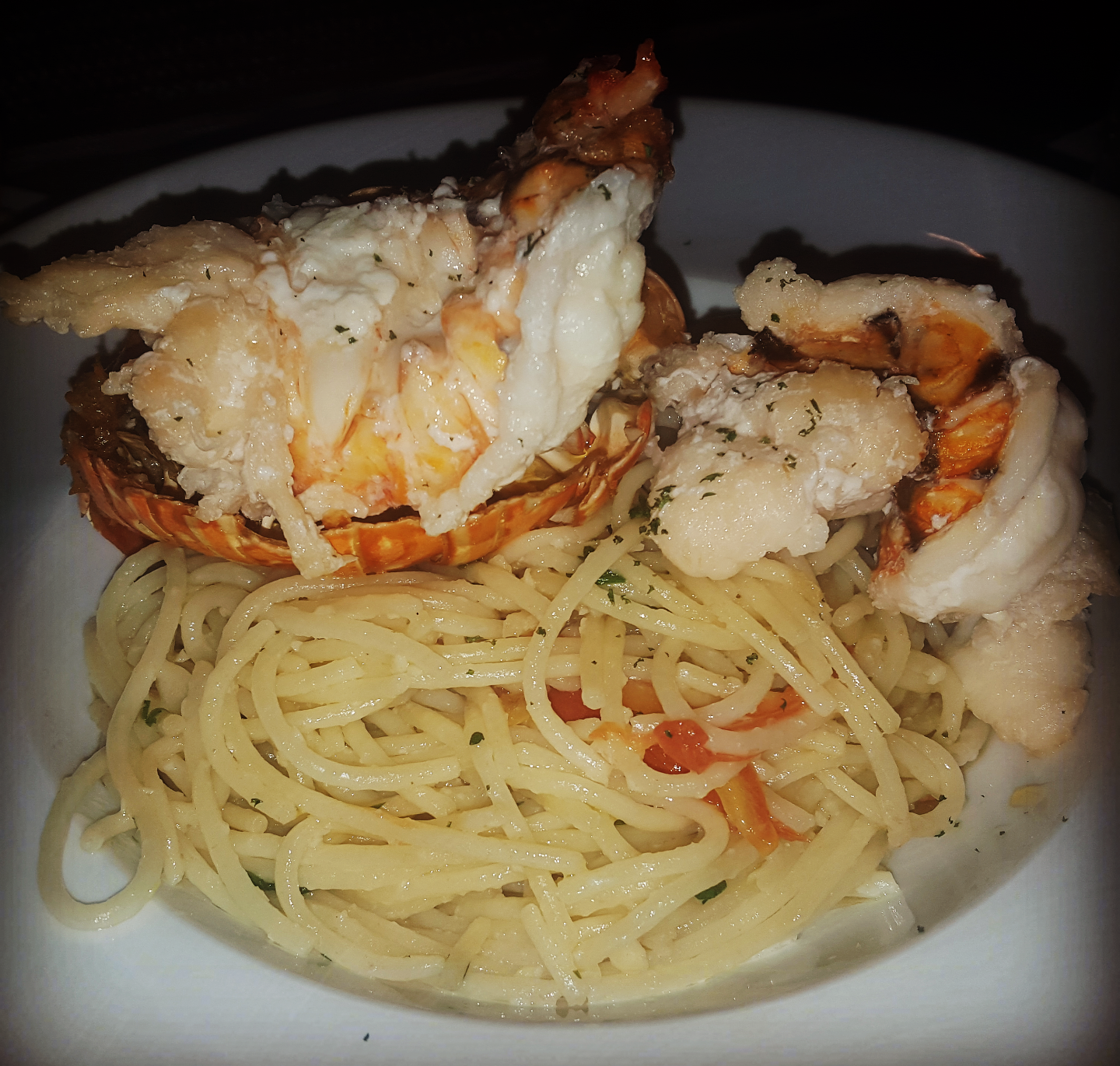 Comments: Modern décor. Consistently good food, service and drinks. Menu with variety and reasonable prices. The white wine sauce used on the pasta was divine. I appreciated that it wasn’t a heavy, creamy sauce. #SugaEndorsed 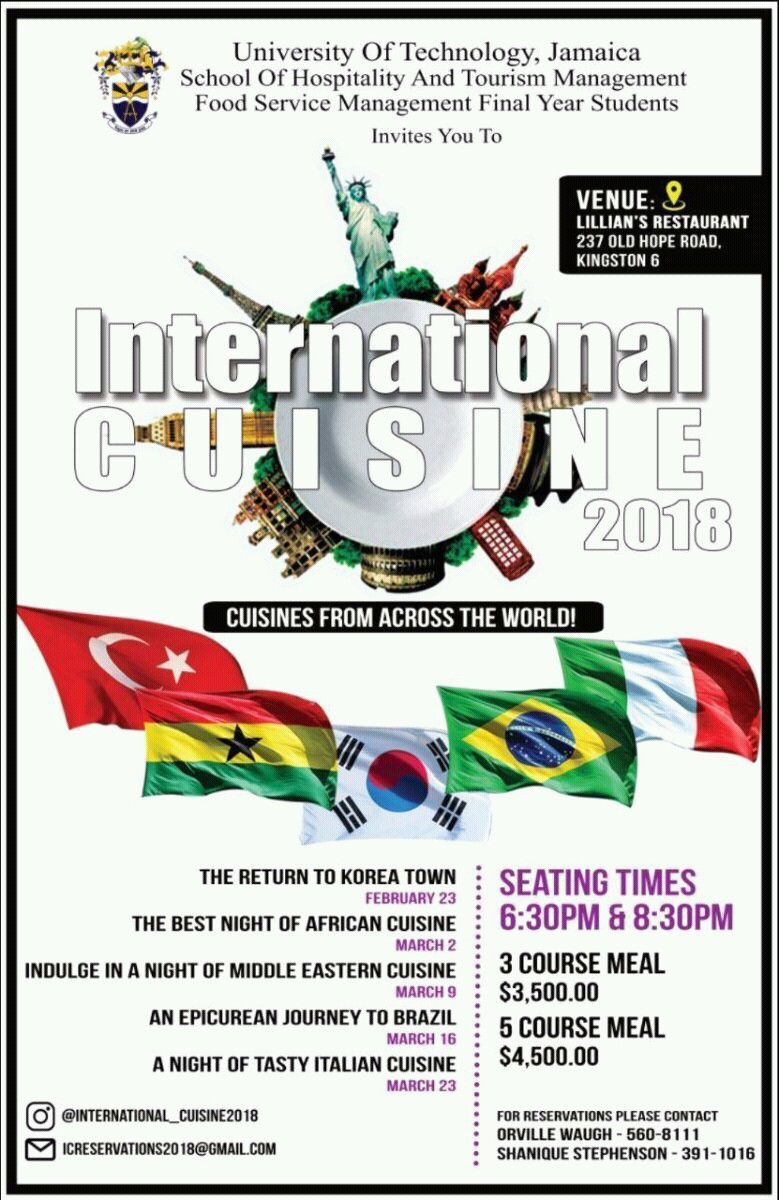 Every Friday evening from February 23- March 23, 2018 at Lillian’s Restaurant, the following cuisines will be featured:

Show our ‘Chefs to be’ some support while enjoying delicious cuisines from across the world! 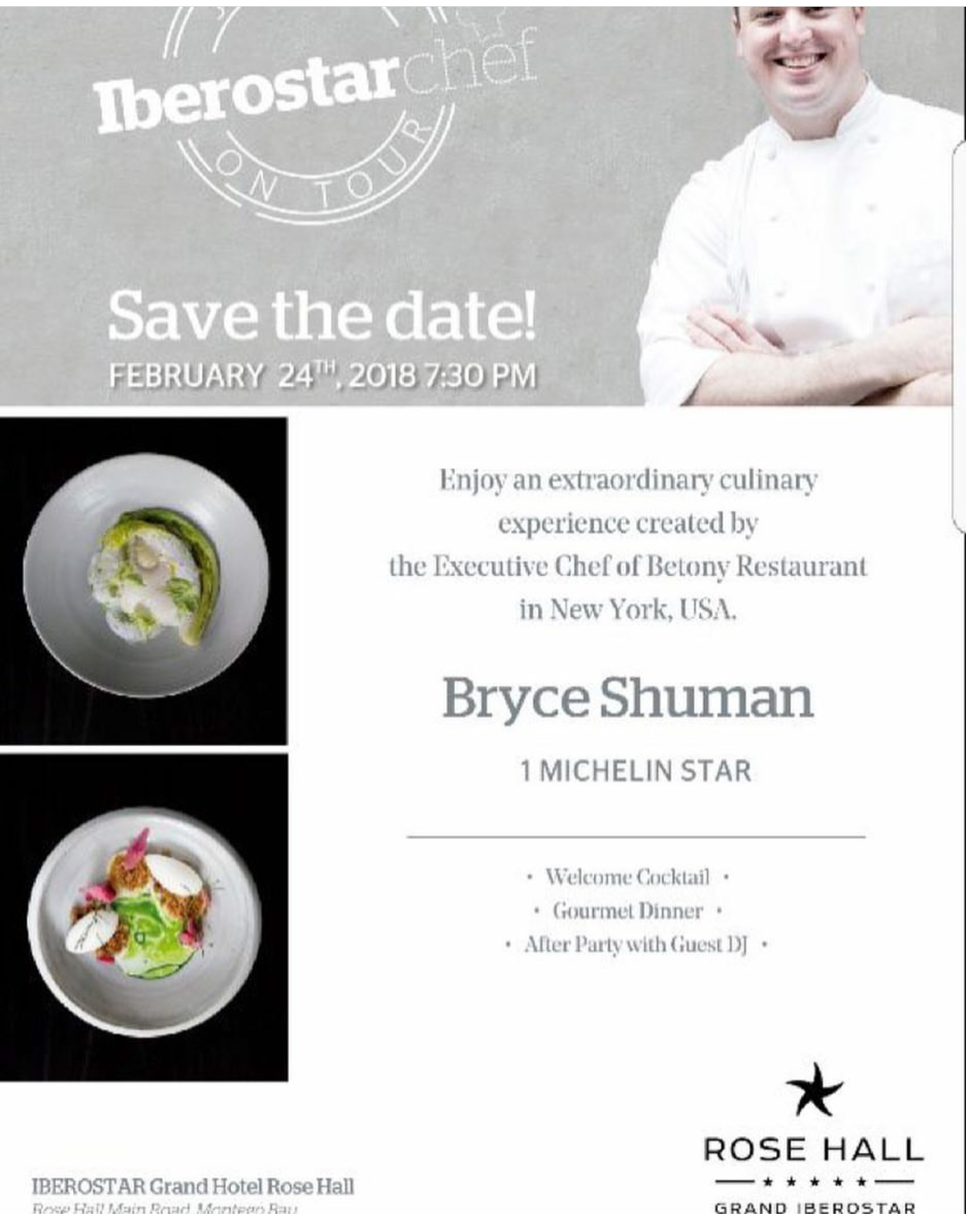 Iberostar Chef on Tour will feature Executive Chef Bryce Shuman from Betony Restaurant, who has a Michelin star in New York, USA.

Save the Date for this Culinary Experience! 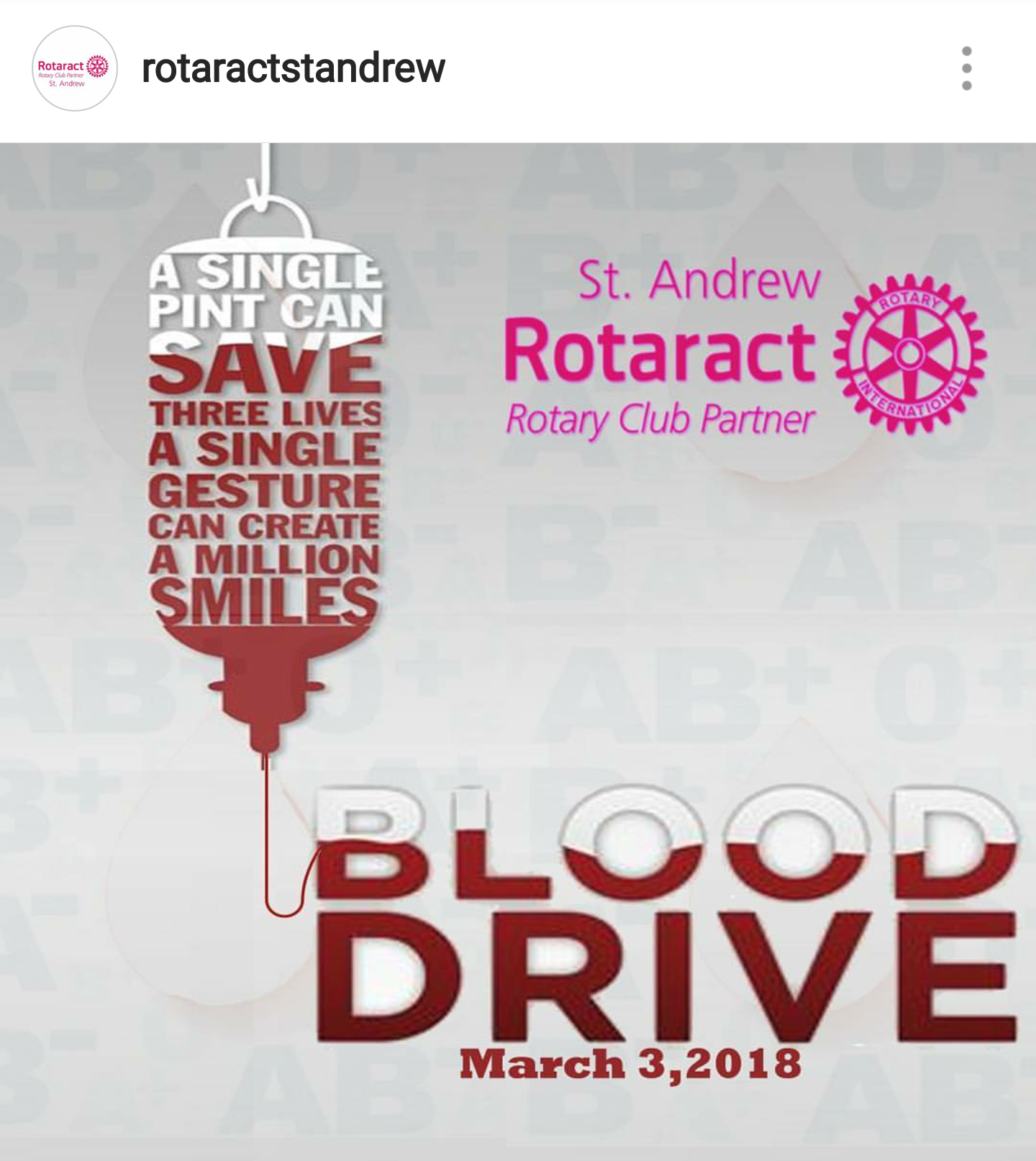 Save the Date, Saturday, March 3, 2018 for the Rotaract Club of Kingston’s Blood Drive at the National Chest Hospital in St. Andrew.

Remember that giving blood is a gift that you give today to urgently save your life or your loved ones tomorrow. 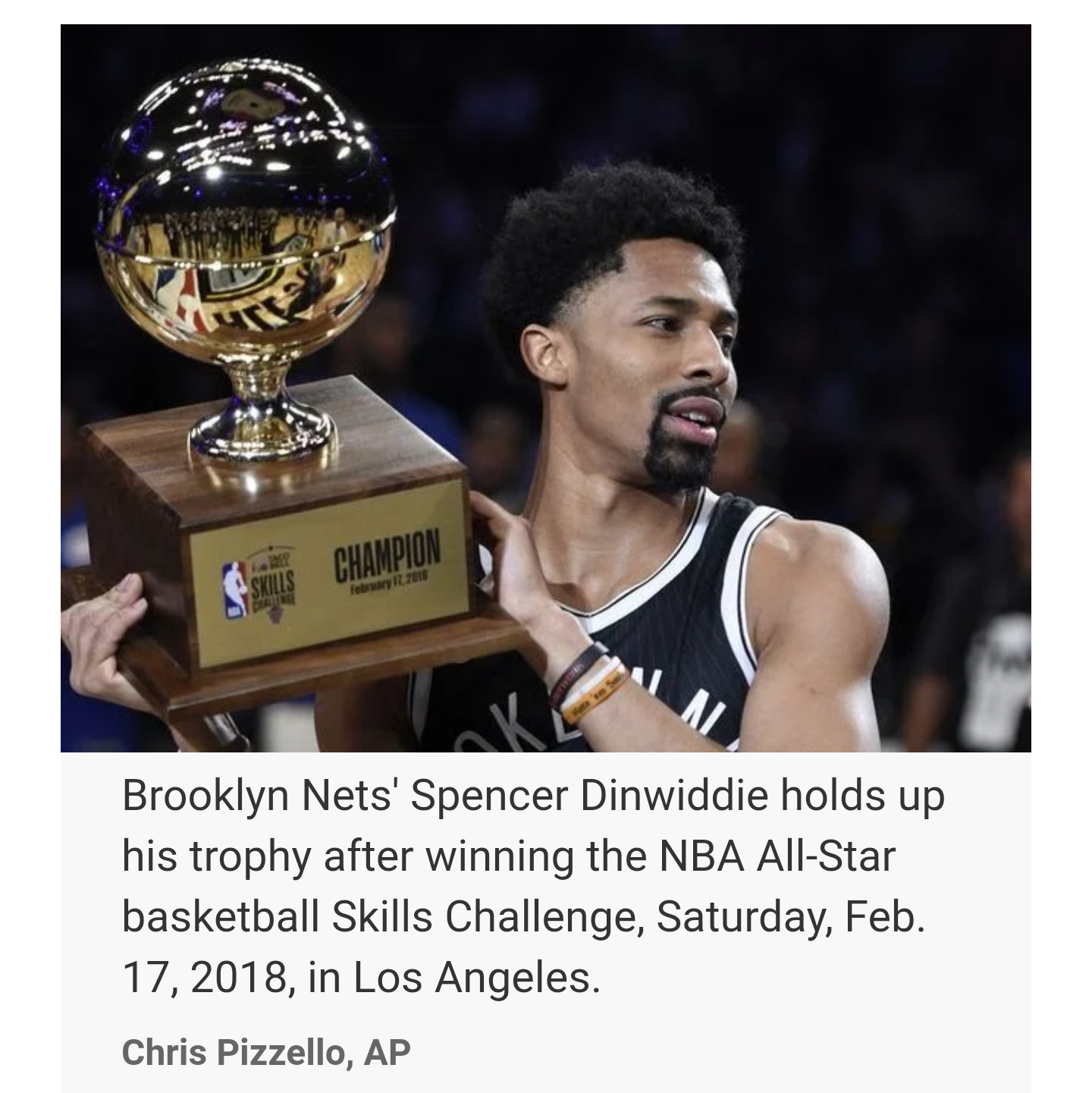 The Weekend kicked off with Team World beating Team USA 155-124.

Philadelphia 76ers’ Joel Embiid was accused of cheating in Round 2 when he missed throwing the ball into the net and moved on to the next challenge in the round. But he lost to Lauri Markkanen who moved on to the final round anyway.

Congrats to Spencer Dinwiddie of the Brooklyn Nets for dominating Lauri Markkanen of the Chicago Bulls in the final round.

The 3-Point Contest was embarrassing for most. Especially for OKC’s Paul George who managed to just score 9. Rookie for Phoenix Suns, Devin Booker won the contest with 28 points. Previous winner and Splash brother from Golden State Warriors, Klay Thompson was the runner-up with 25 points.

The Slam Dunk Competition was not that exciting for me this year. Less gimmicks and lack of creativity. The most exciting moments were Pacers’ Victor Oladipo attempting to dunk in a Black Panther mask that he was probably blinded by and Larry Nance Jr of the LA Lakers pulling off the dunk his father did in the old 1984 Phoenix Suns jersey. His father, Larry Nance was present, also assisting him in the final dunks of the competition. Larry Nance was the inaugural winner of the Dunking competition in 1984.

Kudos to Mitchell for showing some well needed showmanship. He jumped over Kevin Hart in the earlier round, which is not much of a task, but provided some comedy for the crowd. Kevin Hart wasn’t ready.

The referees took the game seriously as well this year. A lot of fouls were called and defense was increased majorly on both sides. It was a close game throughout, but Team Stephen led for the majority of the game. They were tied at 144 each with a minute and a half remaining and right up to 40.2s remaining. DeMar DeRozan of Team Stephen hit a free throw, then LeBron scored a lay up assisted by Kyrie Irving making it 146-145. But it was Russell Westbrook’s two-point shot assisted by Team Captain, LeBron James that sealed the deal with 10.7s remaining in the game. It was left up to Team Captain Stephen Curry to make the final 3-point shot to force overtime but he just couldn’t find any space to shoot and was forced to pass the ball to DeMar DeRozan who let off the shot but missed. It was probably after the buzzer anyway. Team LeBron wins! They won 148-145.

Biggest Loser of the Weekend

The biggest loser of the weekend for Suga though? Fergi! What was she thinking?! She sang the National Anthem like she was singing Santa Baby. It was awkward for everybody. Shame on you Fergi. Twitter ripped her apart.

Great All-Star Weekend though! See you next year! 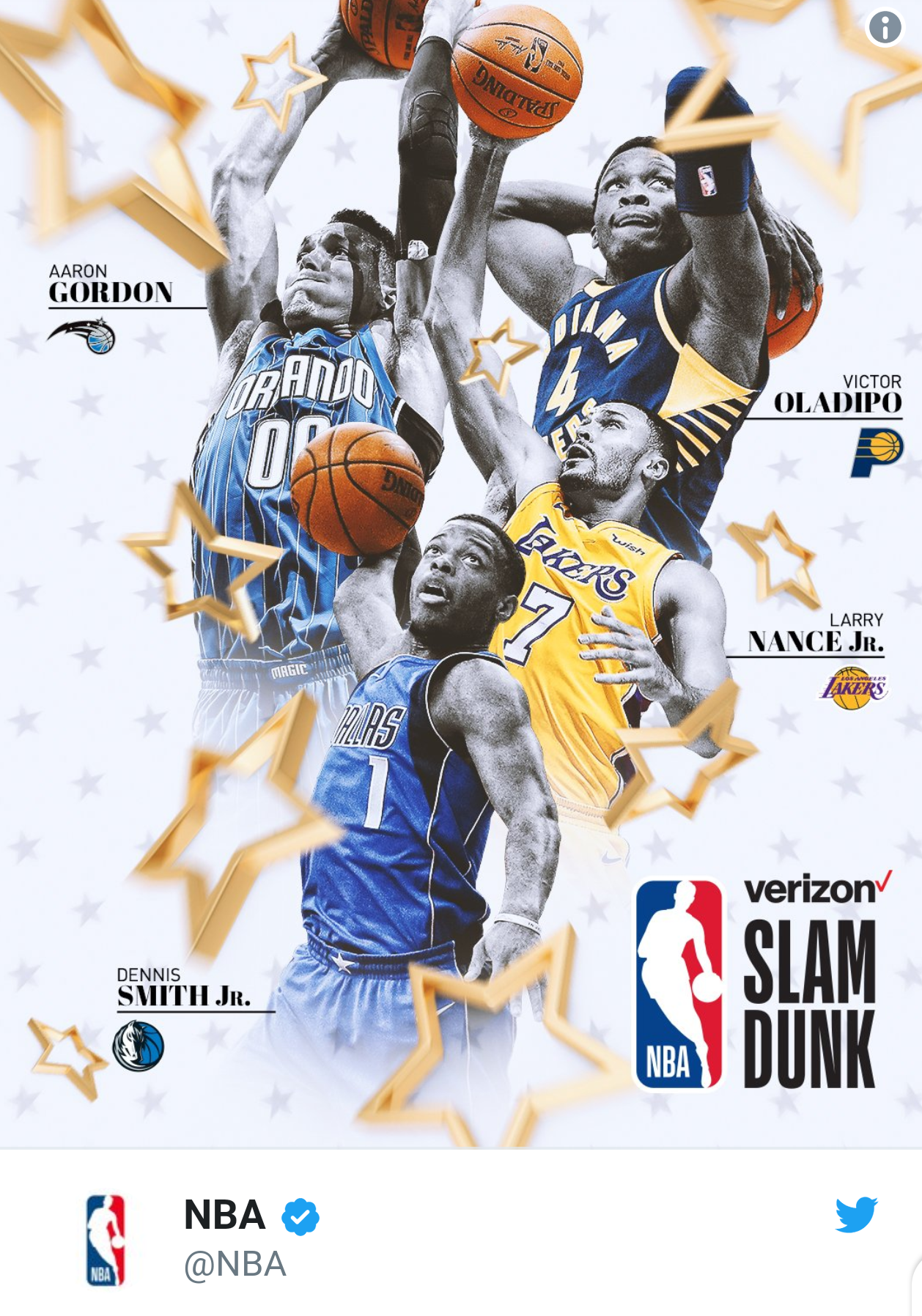 NBA All-Star Weekend 2018 is here! It will be held in Los Angeles this year and will feature various events including your favourites.

The NBA All-Star Celebrity Game will be tonight at 7pm ET on ESPN. Some of the Celebs that will play are Tracy McGrady, Black Panther Star Michael B. Jordan, Nick Cannon, Jerry Ferrara (Power), Common, Dascha Polanco (Orange is the New Black) and Jamie Foxx.

For probably the most exciting night of the Weekend, see who will be in each competition here!

N.B. Donovan Mitchell of the Utah Jazz will be replacing injured, Aaron Gordon 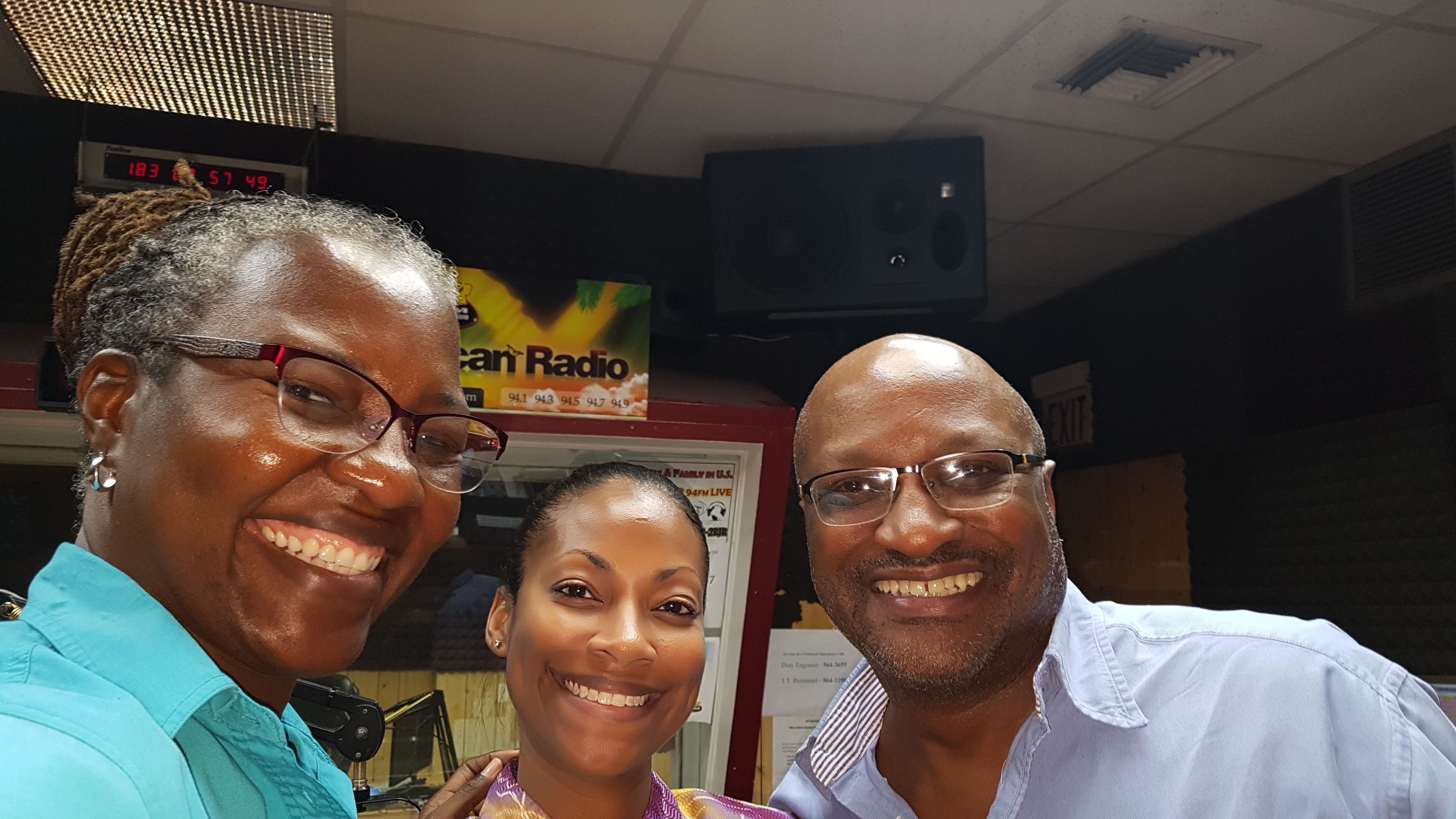 Gabrielle Burgess (Suga a.k.a Gabby) on The Sunny Side Up this morning with hosts, Francois St Juste and Paula-Anne Porter Jones

Thanks for Listening to Suga a.k.a Gabby this morning on The Sunny Side Up with Paula-Anne and Francois Suga Bears!

The feedback has been great!

For those of you who are new to Suga Lifestyle, feel free to peruse my hobbies and Career Categories of Health and Fitness, Restaurant Ratings and Reviews, Charities, Sports, Recipes and of course my GW Art Gallery.

Suga is also certified and specialises in helping persons to get and stay fit, lose weight, tone and maintain a healthy lifestyle. Training sessions incorporate Aerobics, Cardiac endurance and Strength and Resistance, topped off by Yoga for increased strength, toning, flexibility and muscle recovery.

Thanks again for Listening!