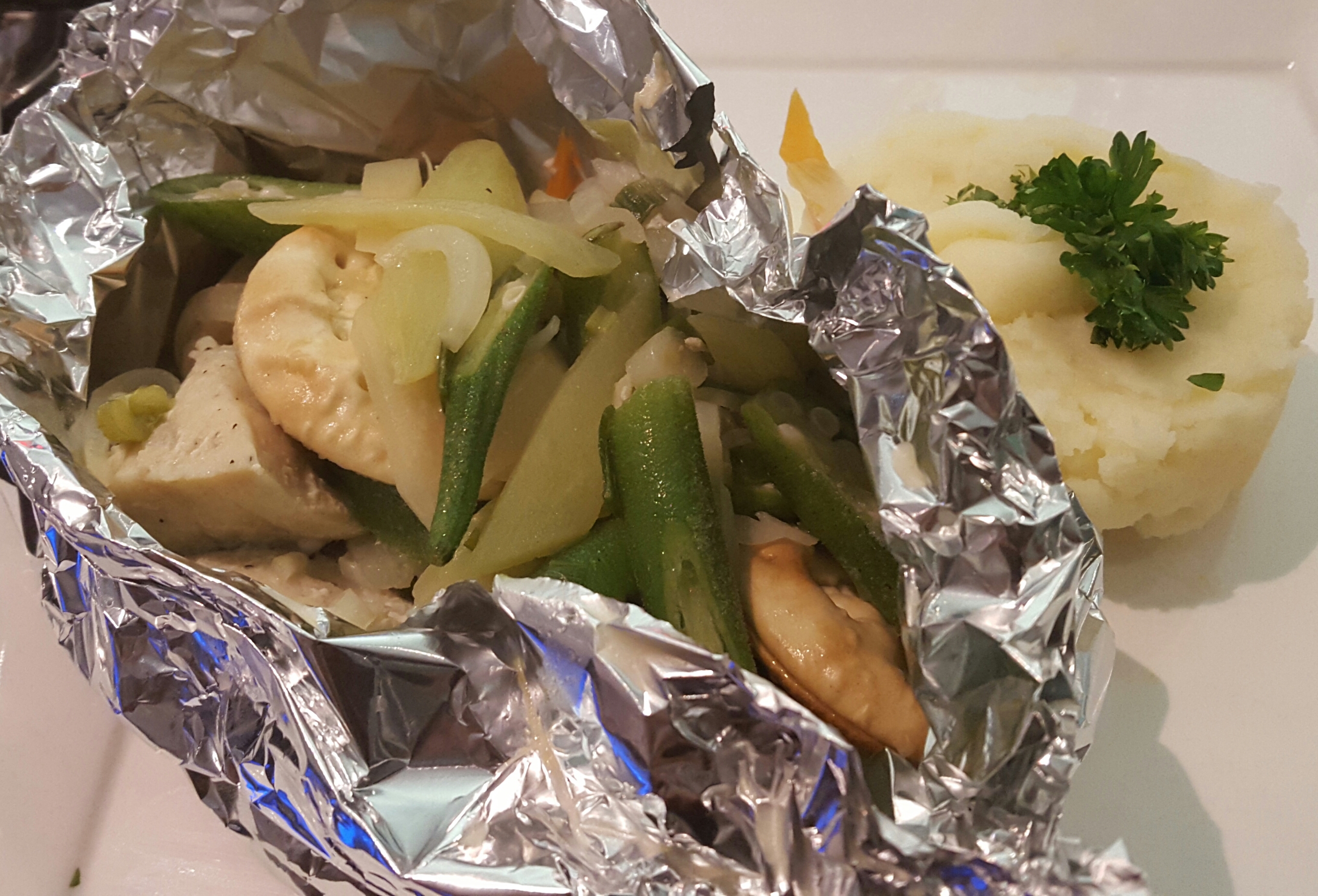 A few weeks ago I had the Steamed Fish from 100 that came with mashed potatoes, vegetables and water crackers. Some more pepper was needed but it was satisfying nonetheless.

Since the Olympics last summer, the service and food at 100 has really improved and I now enjoy going, especially to watch sports on the biggest HDTV Video Wall on the Island. 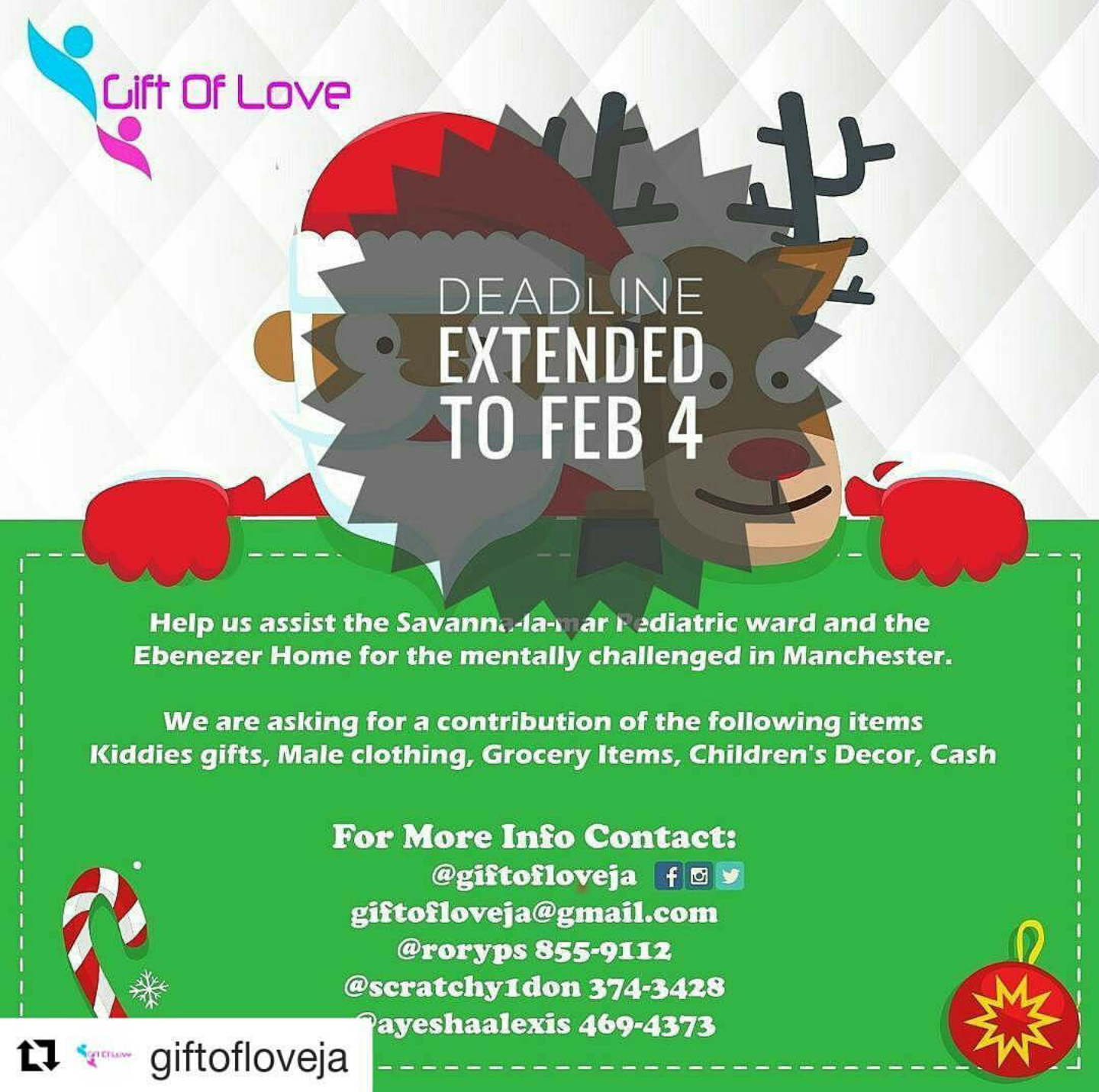 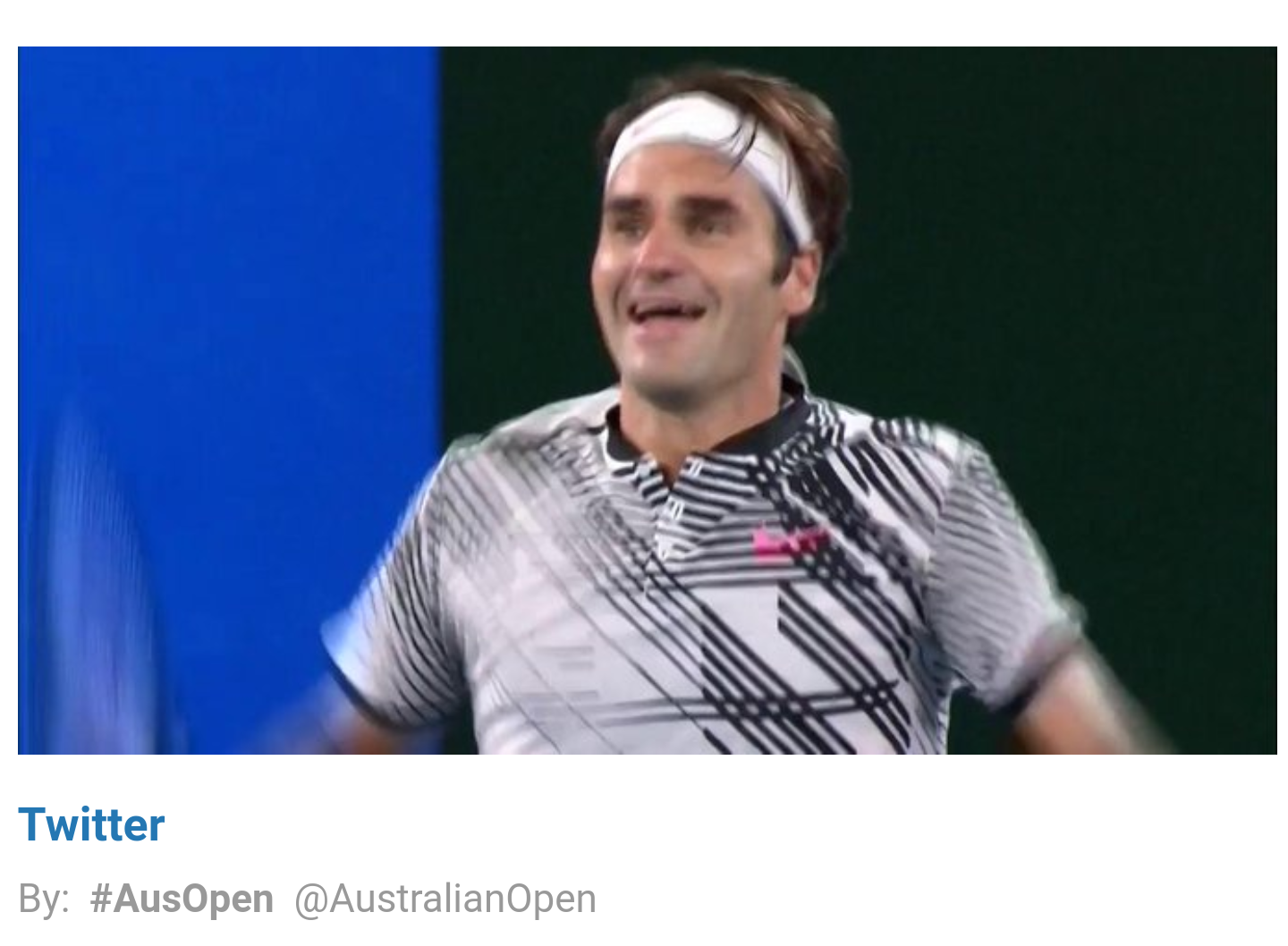 3rd Set
Federer was seeing the ball early and was phenomenal. The commentators said Federer was just pushing Nadal around.

Nadal held serve to get on the board in the 3rd set at 3-1 and it was not easy as Roger came back from 40-love saving 3 break points and they went back and forth after that until Nadal finally held serve.

Roger held serve easily after that to go up 4-1.

Nadal went back on serve and was not giving Federer the set easily but Roger had 2 spectacular shots back to back with his backhand to convert breakpoint at 5-1.

At that point Nadal sent 3 racquets to be restrung. The commentators joked they may not get back in time.

Then Roger was up to serve for the set. His forehand got him out of drouble at 30-40. He later failed to convert set point. It went back to deuce. He hit a ball long to give Nadal the advantage and served well to save it and go on to win the 3rd set, 6-1.

4th Set
Nadal started on serve in the 4th and held. The crowd was behind him even more.

Roger held serve easily to bring it to 1-1.

Nadal held easily to go up 2-1 than Roger had 2 bad misses on his serve creating an
opening for Nadal at love-30 and Nadal broke Federer early to go up 3-1.

Roger’s level of precision dipped on both his forehand and backhand since the bad miss in the previous game and it pushed Nadal to 40-15. He got a good forehand back to push it to 40-30 then he went on to push it to deuce. Nadal eventually closed out a tough service game with a shot that looked impossible to make to get to 4-1.

Roger served out a tough service game to put some scoreboard pressure on Nadal. Nadal now led 4-2 then pushed it to 5-2 with a love game followed by another to win the 4th set.

5th Set
After Federer took a Trainer’s time out,
Nadal broke his serve at the start of the 5th.

Nadal definitely started hiting the ball harder and at that point Federer would have to raise the level of his game to beat Nadal in the 5th.

The crowd got behind Federer and he thought he was going to get the break back but Nadal saved the break points and went up 2-0. Then Federer got on the board easily to make it 2-1. Federer came close on Nadal’s serve with break points but Nadal came through with the dagger to move closer to winning the Championship moving up to 3-1.

But you couldn’t count Roger out just yet!

He held serve then broke Nadal to get to 3-3 and served a love game to go up 4-3. The crowd got on their feet.

Federer got his feet back, dug deep and broke Nadal to go up 5-3. Federer converted his 2nd Championship point and won after Nadal was wrong on his Challenge. Roger won his 18th Grand Slam title 6-4, 3-6, 6-1, 3-6, 6-3 and continues to be the greatest of all time.

Well played nadal. It was an epic match to go down in history. Congratulations FedExpress! 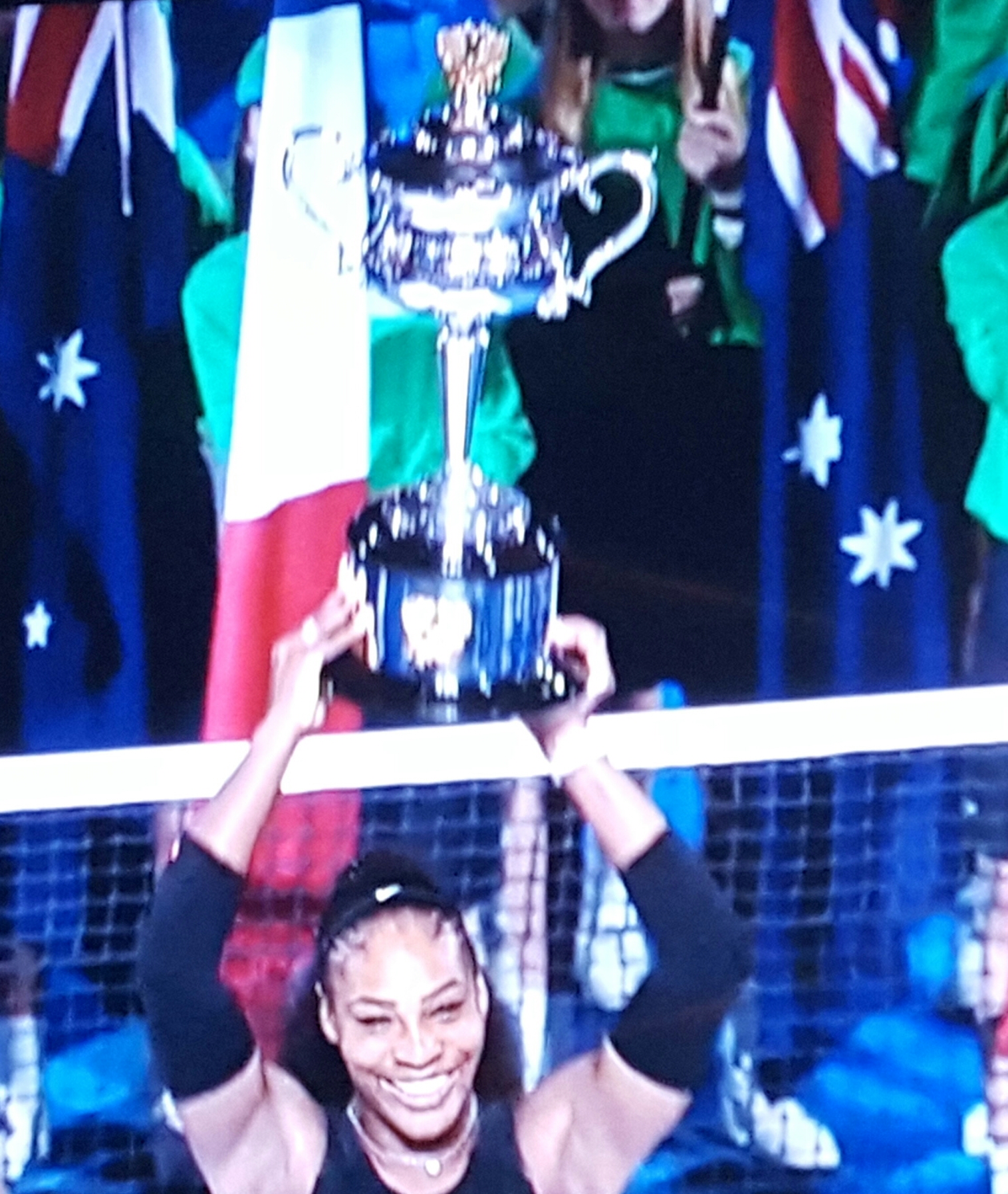 The match had an extremely tense start. 1st serve percentages were low for both sisters and Serena had to change her racquet after what she did to it in frustration.

After numerous double faults on both sides, break for break and repeat at 2-2 with Serena being very tight, Serena found a way to eventually break Venus once more and serve out the set, taking the 1st set 6-4.

Venus missed a lot of chances that she couldn’t afford, because to beat Serena she had to be perfect. Serena does not get beaten at her best and her best is better than Venus’ best. So you can see where it got mental and emotional for Venus as she knew she had to elevate her game and it was not happening.

Venus held serve to start off the 2nd set. Serena followed. Venus was then in trouble down love-40 and saved 3 break points to hold serve and go up 2-1 in the 2nd.

Venus then had a game of many missed opportunities, mainly failure to return weak 2nd serves by Serena resulting in Serena holding to even the set at 2-2.

At 3-3 there was negative body language from Venus. Serena capitalised on sharp angled 2nd serve returns and finally broke Venus to go up 4-3. Serena then served a perfect game to go up 5-3.

Venus held her serve to move to 4-5, followed by Serena serving for the Championship. Venus won the longest rally of the match in that game but Serena kept fighting and converted her Championship point!

Serena won 6-4, 6-4 falling to the floor in joy. Venus walked over to her side of the court and they shared a warm embrace.

Serena now has the Open era record of 23 Grand Slam titles and will return to the #1 ranking in the world next week. Vintage Men’s Final it is! Federer vs Nadal!

The Final will be this Sunday! Stay tuned. 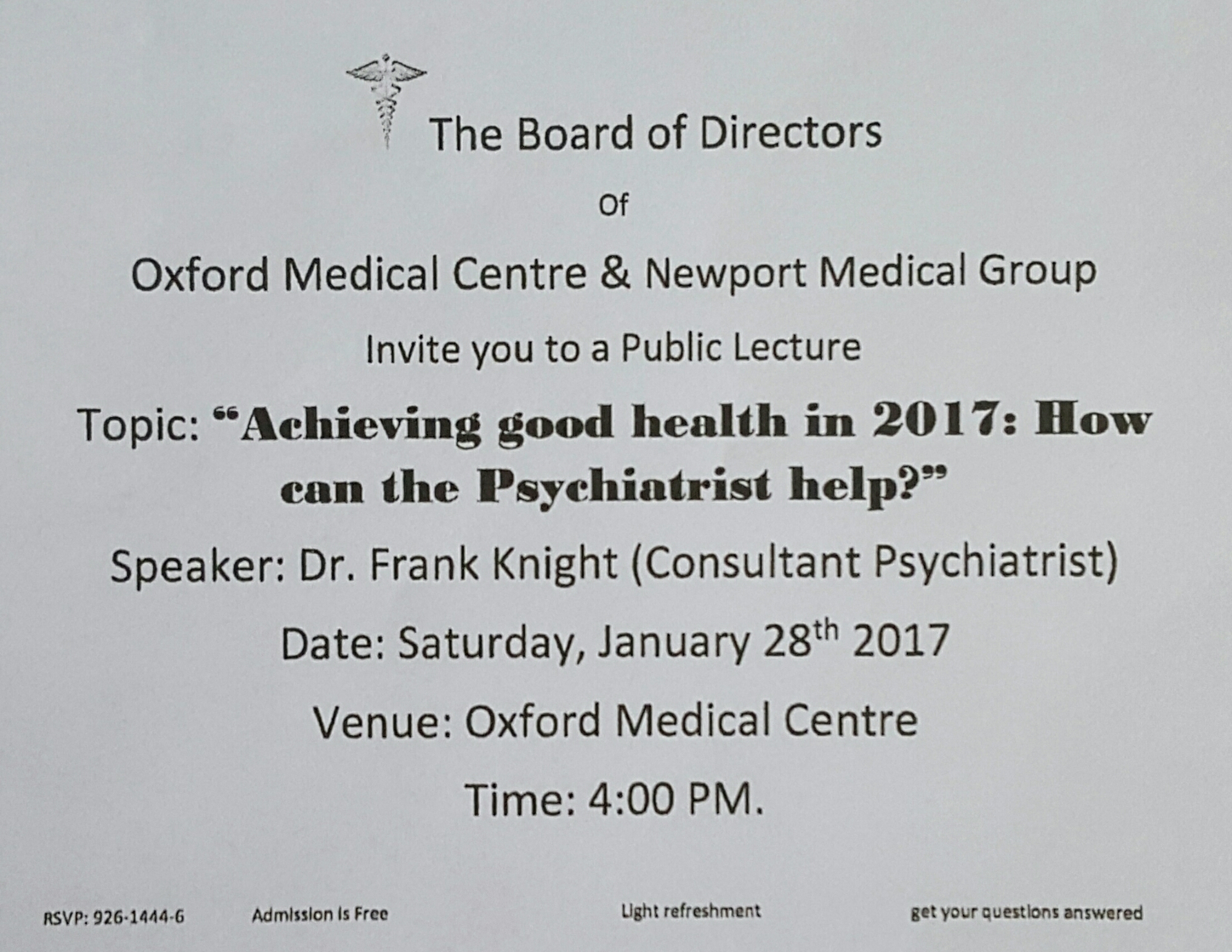 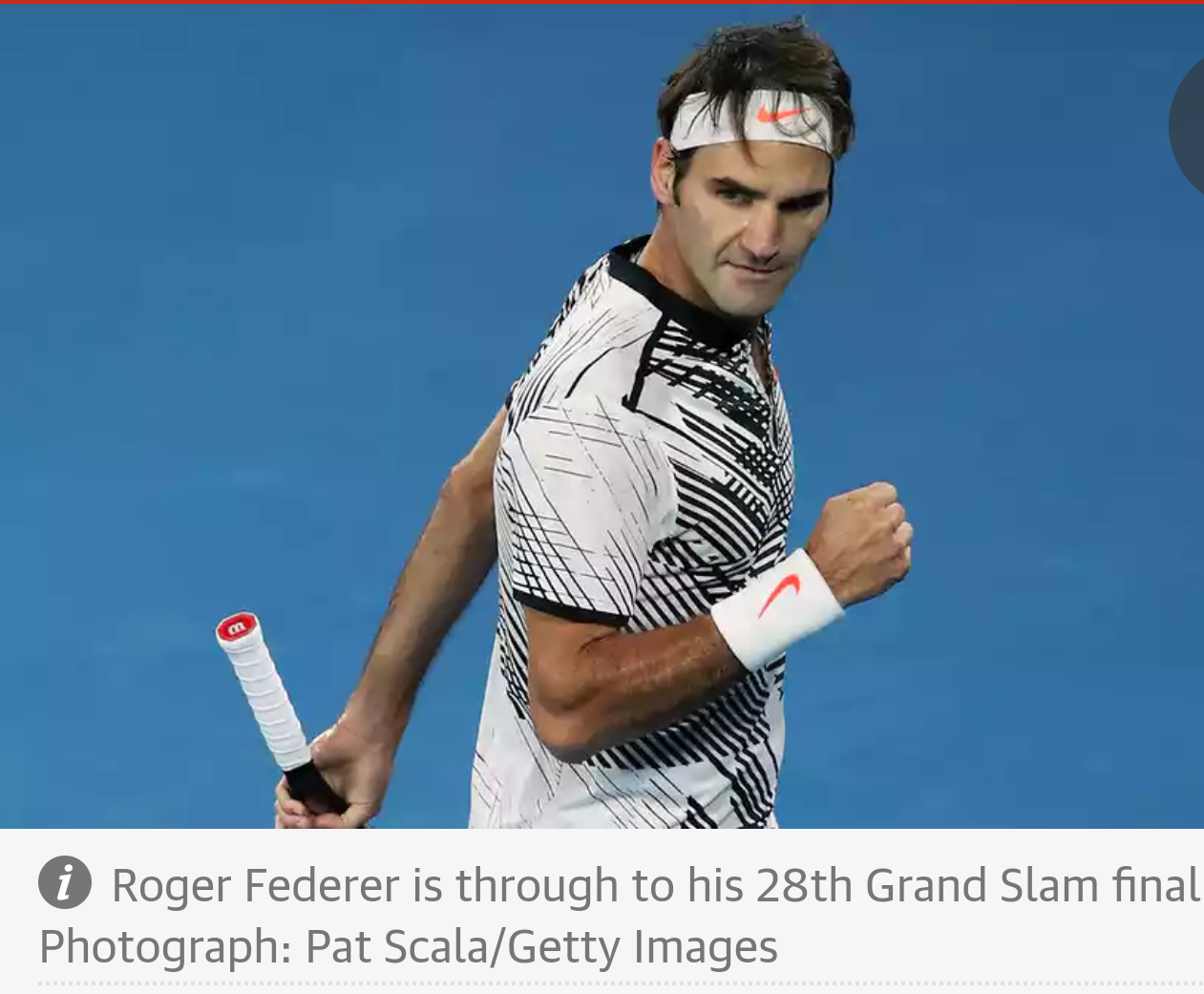 Will it be a Vintage Men’s Final too? Suga thinks so! Federer awaits the winner of the Nadal vs Dimitrov Semi-Final. 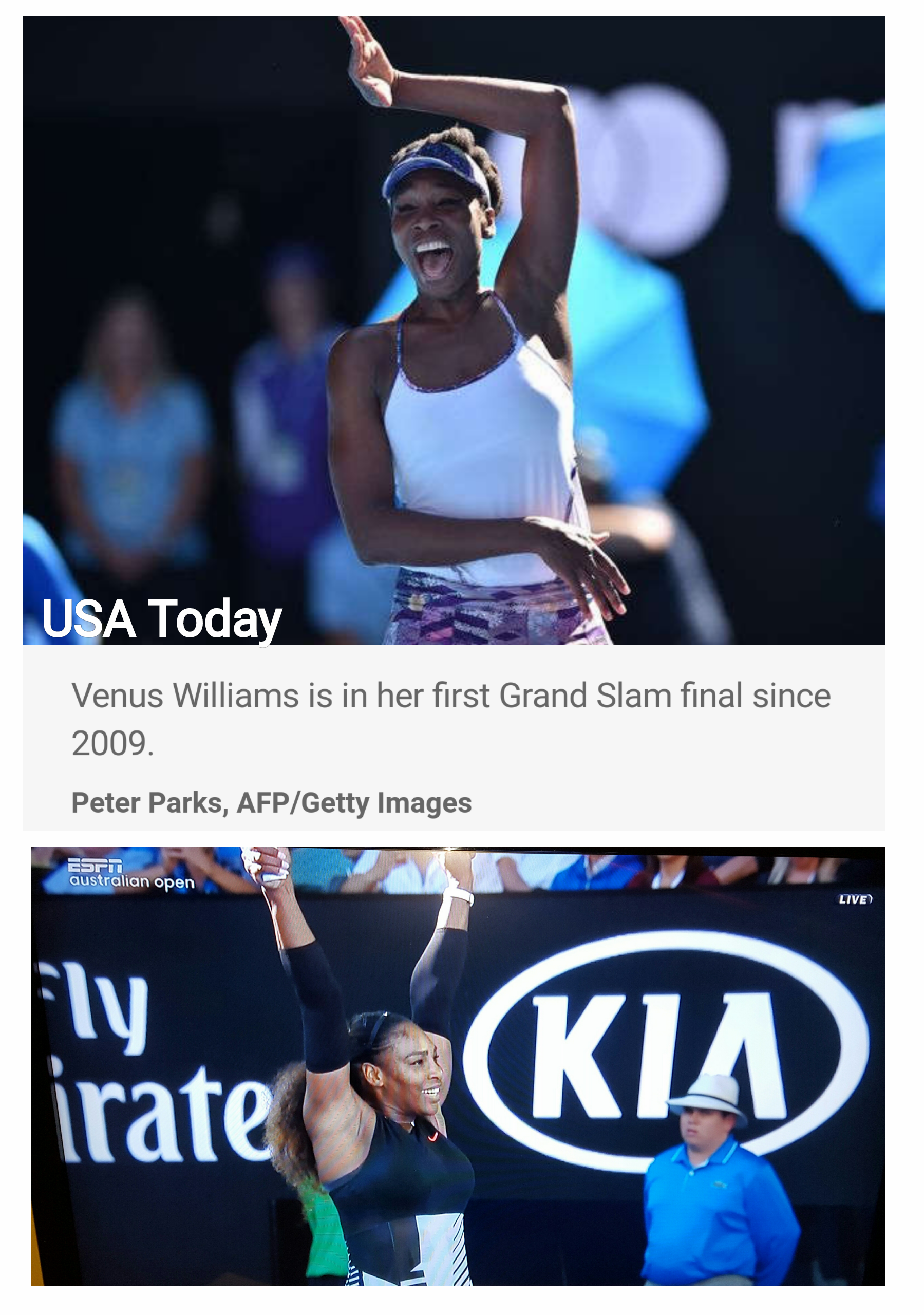 A Williams will win the Australian Open this year!

Serena’s serve was much better last night and she dominated Lucic-Baroni 6-2, 6-1.

It was all about Venus Williams making the Final last night though! She surely took centrestage. Her match was before Serena’s and must have helped to further inspire and fire up Serena to win her match.

Vintage Venus was on the move! It was such a beauty to watch. Quite inspirational.

The match started off with Venus being broken in her 1st game and that never occurred again. The 1st set went back and forth with Venus up 6-5. At this point Coco raised the level of her game to force the tiebreak. Venus tightened up during the tiebreak and lost the 1st set. She was visually upset with herself and if looks could kill! She expressed her wrath in the 2nd set with controlled aggression and took it easily, 6-2.

Of course at that point, the edge was still given to the younger player, Coco to have enough gas left for 3 sets. But the momentum stayed on Venus’s side with her entering the 3rd set with the same attitude, breaking Coco early. Coco went a bit loco throwing her racquet but she did not go down without a fight. I remember her asking out loud early in the 1st set what was going on. Well by the 3rd set it must have hit her that she was playing the experienced Venus Williams who was one of her 4 idols growing up. The other 3 included Venus’s sister, Serena, Jennifer Capriati and Lindsay Davenport.

It has been years since Venus has played like this. I was pleasantly surprised that she pulled this off. She saved 12 of 13 break points faced and scored 11 aces. Her movement was phenominal, she made necessary adjustments such as hugging the baseline to accommodate hard hitting by Coco and beat her mentally. Her serve was clutch and she won 6-7, 6-2, 6-3. It was spectacular tennis by both players.

Her winning moment is a must see. The 36 year old could not contain her excitement and emotions. She looked like a 6 year old and deservedly so. She had more twirls going than Serena.

Venus hasn’t reached a Grand Slam Final since 2009 and her last Australian Final was in 2003 vs Serena.

Here are the stats between the Williams sisters heading into the Final this Saturday at 3am! 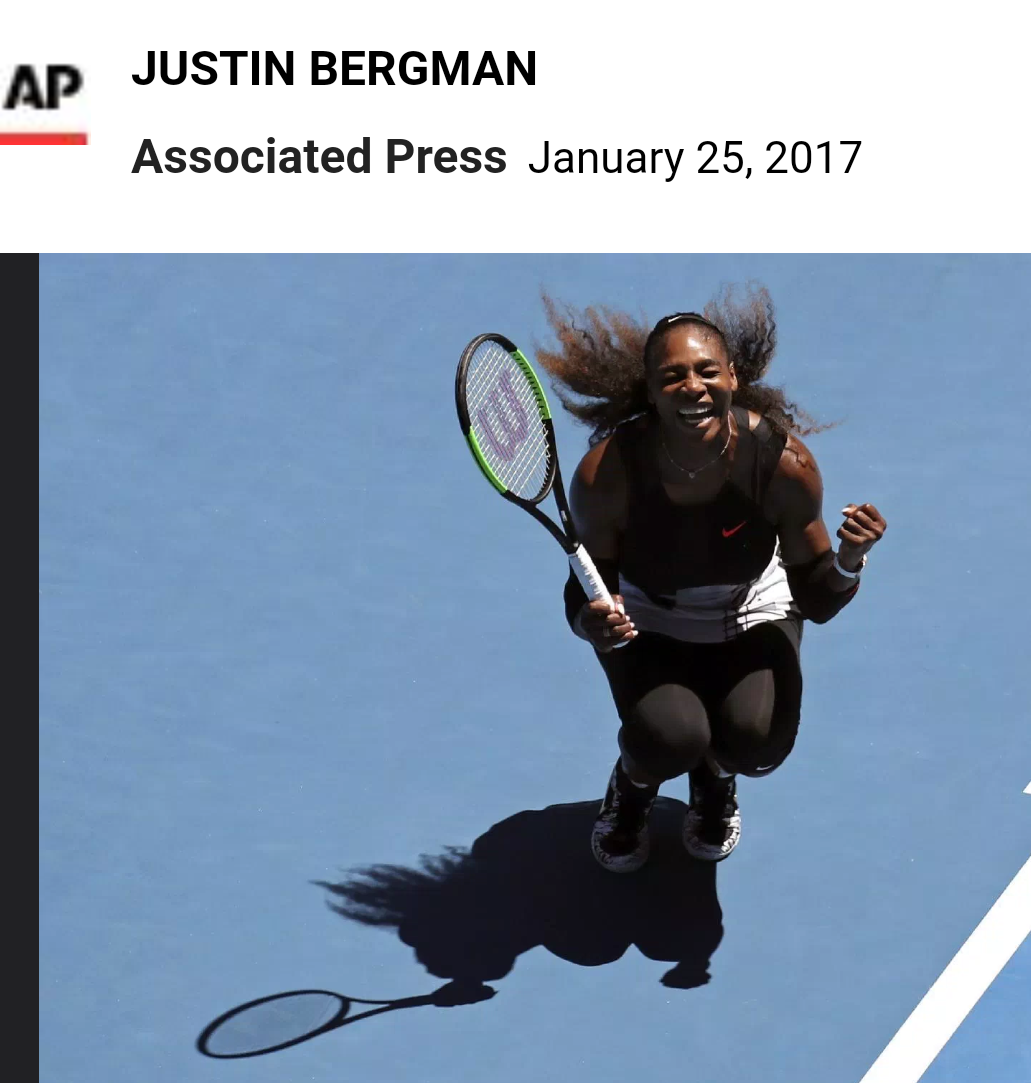 Serena Williams is through to her 10th straight SemiFinal! She beat Konta 6-2, 6-3. It was all mental and she read her opponent well. Despite her poor 1st service games tonight she surely turned up her 2nd and returns!

She will meet 34 year old, Croatian Mirjana Lucic-Baroni at 12am later. Serena is chasing 23 Grand Slam Titles to write history but Lucic-Baroni has her own fairytale story, trying to have the biggest comeback in history. They last met at Wimbledon when they were teenagers in 1998 and Serena came out on top.  Lucic-Baroni was to be the next big thing back then upsetting Monica Seles to reach the Semi Finals at Wimbledon in 1999. But she drifted from the scene with personal issues, coming out to the public a few years later that she was abused by her father. She has a number of injuries but was in tears of happiness just to make it to the SemiFinals and will surely give everything she’s got.

Venus will meet the young power hitter, Coco right now! Will Venus make it an over 30-year old final? Suga favours Coco to win but will be happy if Venus pulls off the win.

The Men’s side is also hot. Rafael Nadal beat Milos Raonic in straight sets and is heading to the SemiFinals vs. Dimitrov.

We could possibly witness a Nadal-Federer Final! Federer would have to overcome Stan Wawrinka first though at 3:30am, which may not be an easy task.

Enjoy and stay tuned! Suga’s got you if you are sleeping. 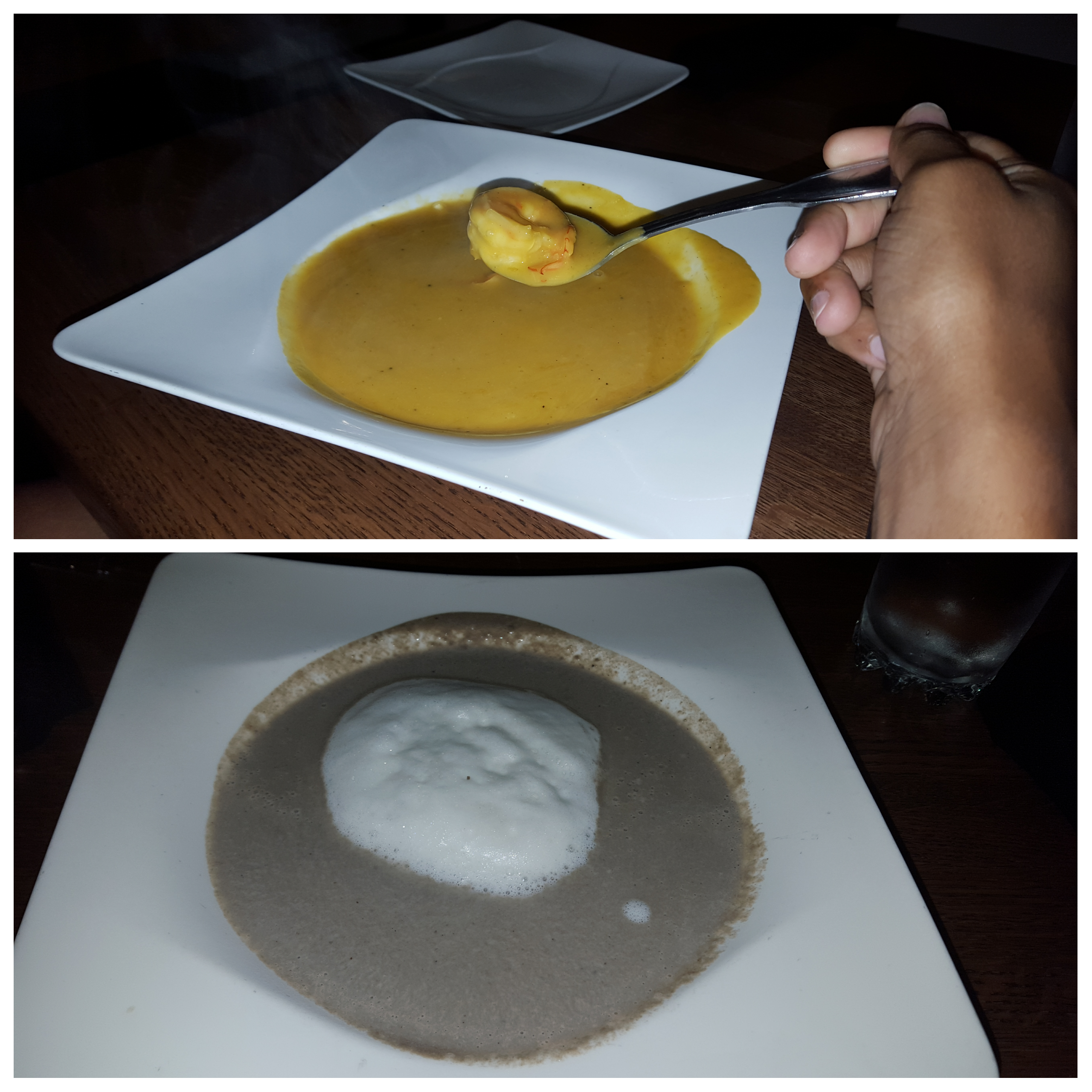 Tamarind Continental was one of the few places open on New Year’s Day for a late dinner so I was thankful.

Their menu consisted of Soups, Salads and Appetizers in the range of $695 to $1395JMD. The Appetizers looked interesting with items such as Stuffed Mushrooms, Grilled Chicken with Olives, Fish strips, Shrimp bites, Zucchini fries with Onion rings and more.

Their main menu had a range of Pastas (Make your own), Burgers, Pizzas and a variety of Chicken, Salmon, Lamb, Shrimp, Fish and Pork dishes. Mushroom dishes were available for Vegetarians too. Prices were from $1100 to $2495JMD.

I peaked over at 2 tables nearby and the Pizzas didn’t look so enticing so I skipped over that part of their menu.

My husband and I started off with the Mushroom Cappuccino ($695JMD) and Shrimp Bisque ($795JMD) Soups. We thought the wait somewhere between 20 minutes and half hour was too long.

We were happy when they came though. Big servings and the Soups were freshly made and flavourful.

Shrimp Bisque (above); Mushroom Cappuccino (below)

I wanted something simple for dinner and since I avoided fries during the holidays I enjoyed their Lamb Burger with fries ($1500JMD) even though the whole wheat bun was not available that night. It was not a big burger but I was satisfied since I had their huge Soup before it.

My husband enjoyed his dinner as well. He had the Chargrill Sage Garlic Chicken Breast served with mashed potatoes and vegetables ($1500JMD). It tasted just as delicious as it looked.

Service throughout the night was good, not great, but I liked the quality of the food and prices were manageable, so I will return. The use of Indian Herbs and Spices in European cuisine gives the food a unique, flavourful taste. My husband already returned for lunch!