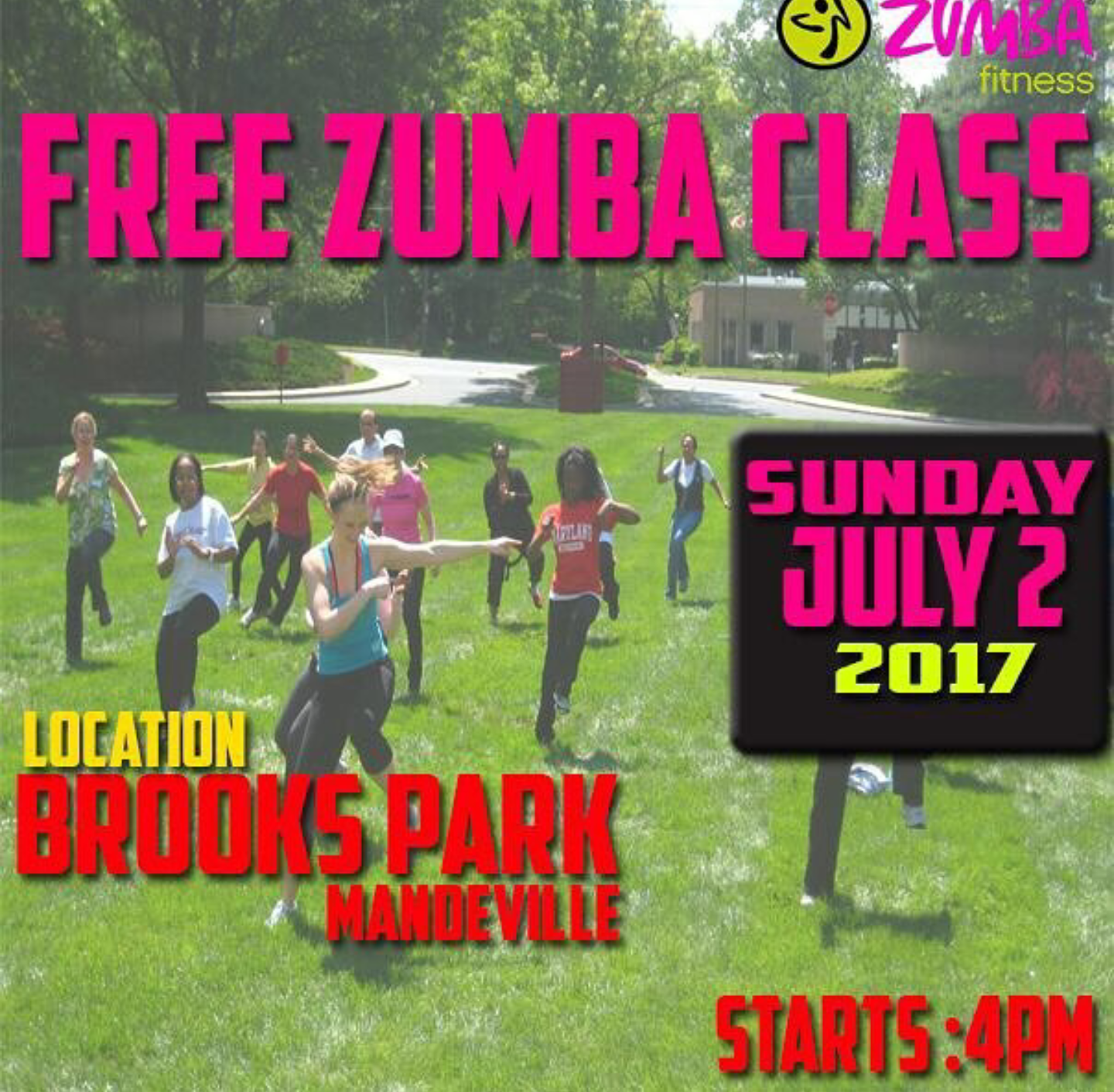 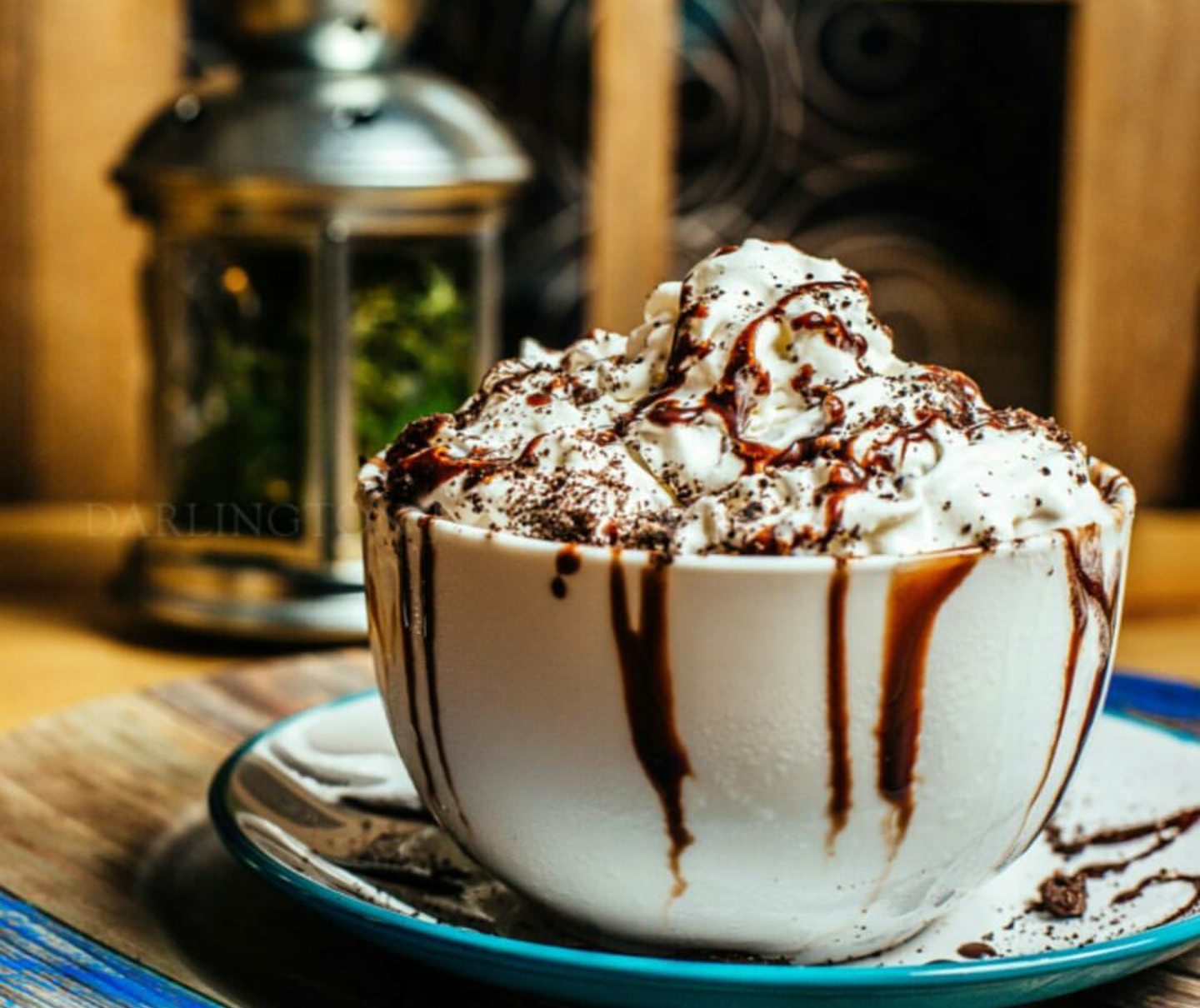 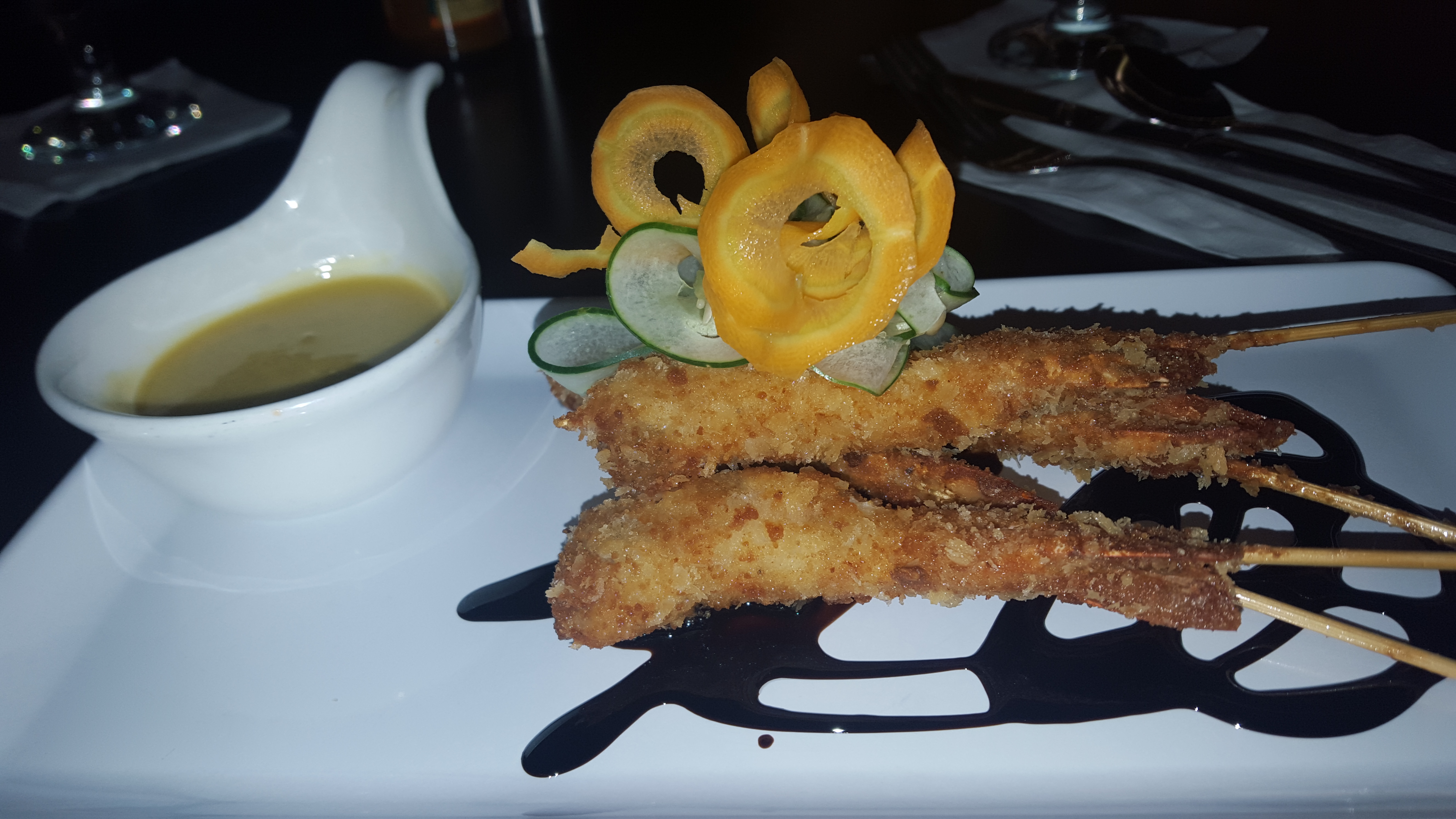 My husband, Randy wanted to treat me to Dinner for my Birthday a few weeks ago. I preferred to go somewhere that I hadn’t been before, so I checked my list and chose the Courtyard by Marriott that is by Emancipation Park.

On Saturday, June 10 at 8pm, we arrived at the Marriott to pleasant greetings and clean, modern décor.

I immediately noticed that there was access to televisions in the seating booths. I was happy I could see the races from the Racers Grand Prix up close and did not have to cut dinner short or keep walking to the Bar counter to see the races properly.

We ordered soon after we browsed the menu and everything arrived to the table like clockwork.

Randy had the Chef’s Soup of the Day, which was a Vegetable Soup ($5.50US). It was a big serving that was tasty and he enjoyed it.

I had the Zesty Fried Shrimp with a flavourful Passion fruit sauce for $12US.

I had the Smoked House Bliss that included Smoked Salmon, Smoked Chicken and Smoked Turkey tossed in a creamy Alfredo sauce ($23US).

I appreciated the fact that my Alfredo sauce was light and I loved the pronounced flavours of the Smoked Meats in the Pasta, which were not lost in the sauce.

I enjoyed my dinner with a Hummingbird, which was not on the Drinks menu, but the Bartender agreed to make it and did a good job too.

My husband also lucked out with the Classical Duo ($30US) consisting of succulent Garlic Shrimp complemented by a delightful sauce and deliciously seasoned, Braised Beef Ribs with a Red Wine sauce. He enjoyed his main with a strong Rum Punch.

The pleasant lady in charge who seemed like the Maître d’, came to our table mid-course, wished me Happy Birthday since she took the reservation and also ensured that service was going well. She then told us that our Dessert would be Complimentary for my Birthday and we should enjoy and return to the Marriott soon.

Randy and I shared the Oreo Cheesecake, which was divine!

Other Dessert choices on the menu included Cakes, Puddings and Fruit medleys that ranged from $5.50-$6.50US.

Marriott is pricey but totally worth it. The food was delicious across the board with good presentation and our waiter, Andrew was very attentive and courteous throughout our courses. #sugaendorsed.

A happy Birthday Girl, Gabby from Suga Lifestyle dining at the Courtyard by Marriott with her husband, Randy Burgess. 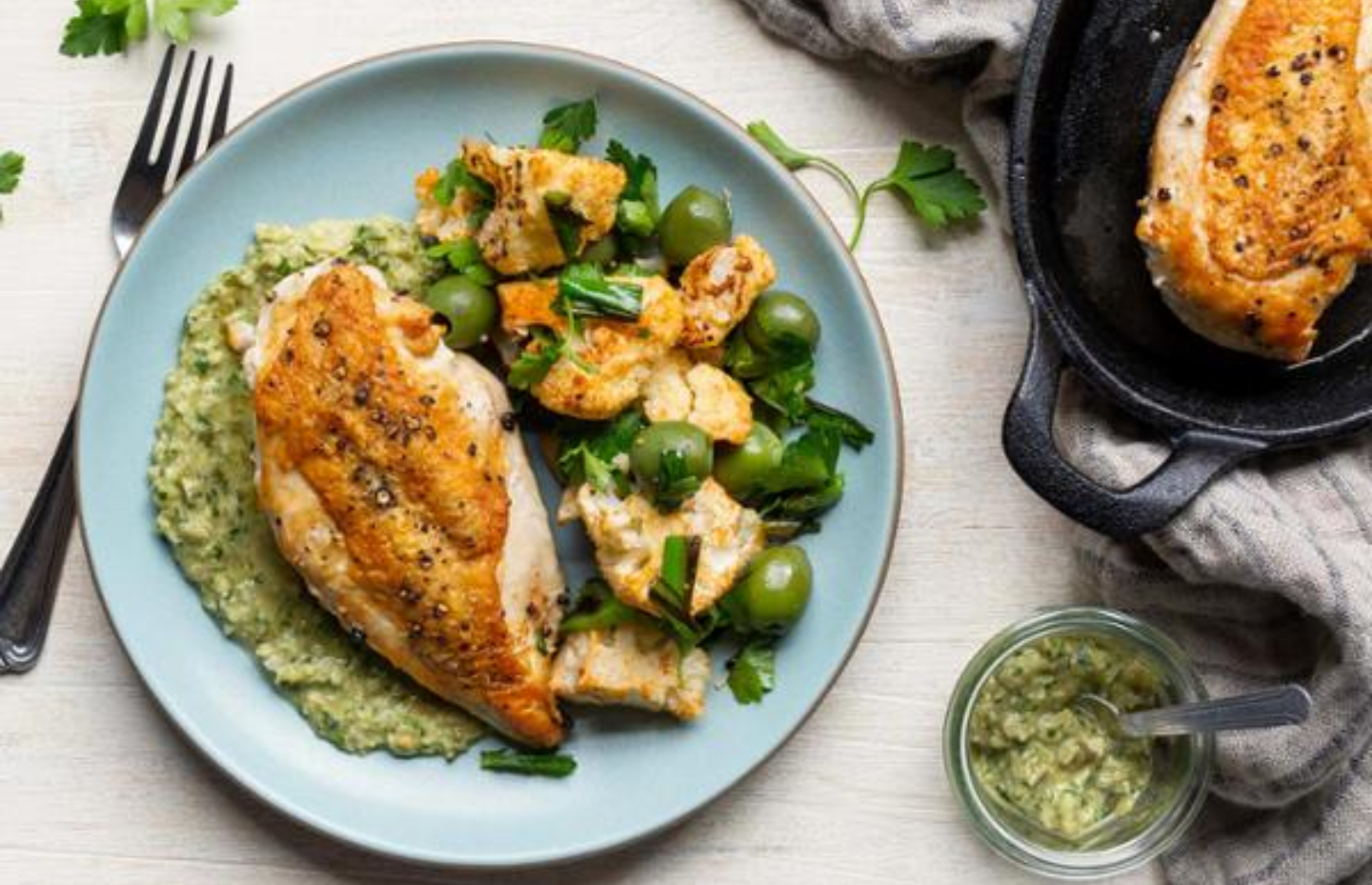 Sunbasket.com embraces the farm-to-table concept and delivers 30-minute recipes and ingredients including premade sauces and spice blends to your doorstep in 100% recyclable boxes.

They are based in the USA and use 100% Organic and Non-GMO produce harvested at the peak of freshness. They use Antibiotic and Hormone-free meat as well.

Recipes are Nutritionist approved and include a variety to suit your type of diet, such as, Paleo, Gluten-free and Vegetarian options.

Here is the ‘Suga Modified’ version of sunbasket.com’s recipe for Roast Chicken Breasts with Spiced Cauliflower and Green Romesco:

Suga’s Tip: If you have any left over Romesco, serve it on your morning whole wheat/grain toast with a boiled egg.

Cut the Cauliflower into 1-inch florets, discarding any leaves or thick stalks.

Combine the Cauliflower, paprika and 2 tsp. Olive oil. Season with salt and pepper, then toss.

2. Roast the Chicken and Cauliflower

Roast until the Chicken is cooked through, then transfer to a plate and rest.

Continue roasting the Cauliflower until browned and tender, perhaps for an additional 6-8 minutes.

Return Cauliflower to bowl where it was tossed to cool slightly.

Cut and cook Scallions into 1-inch lengths and cook until charred for 3-4 minutes, then transfer to a plate.

Add Scallion, Parsley and Olives to the roasted Cauliflower and stir to combine.

Add the green Romesco and top with the Chicken, then serve Cauliflower and remaining Romesco on the side.

Check out sunbasket.com for other healthy and fun recipes for Breakfast, Lunch and Dinner and see if they can deliver fresh ingredients to you!

New, Commissioned piece by GW Art soon to be in an office near you! You can order yours today! 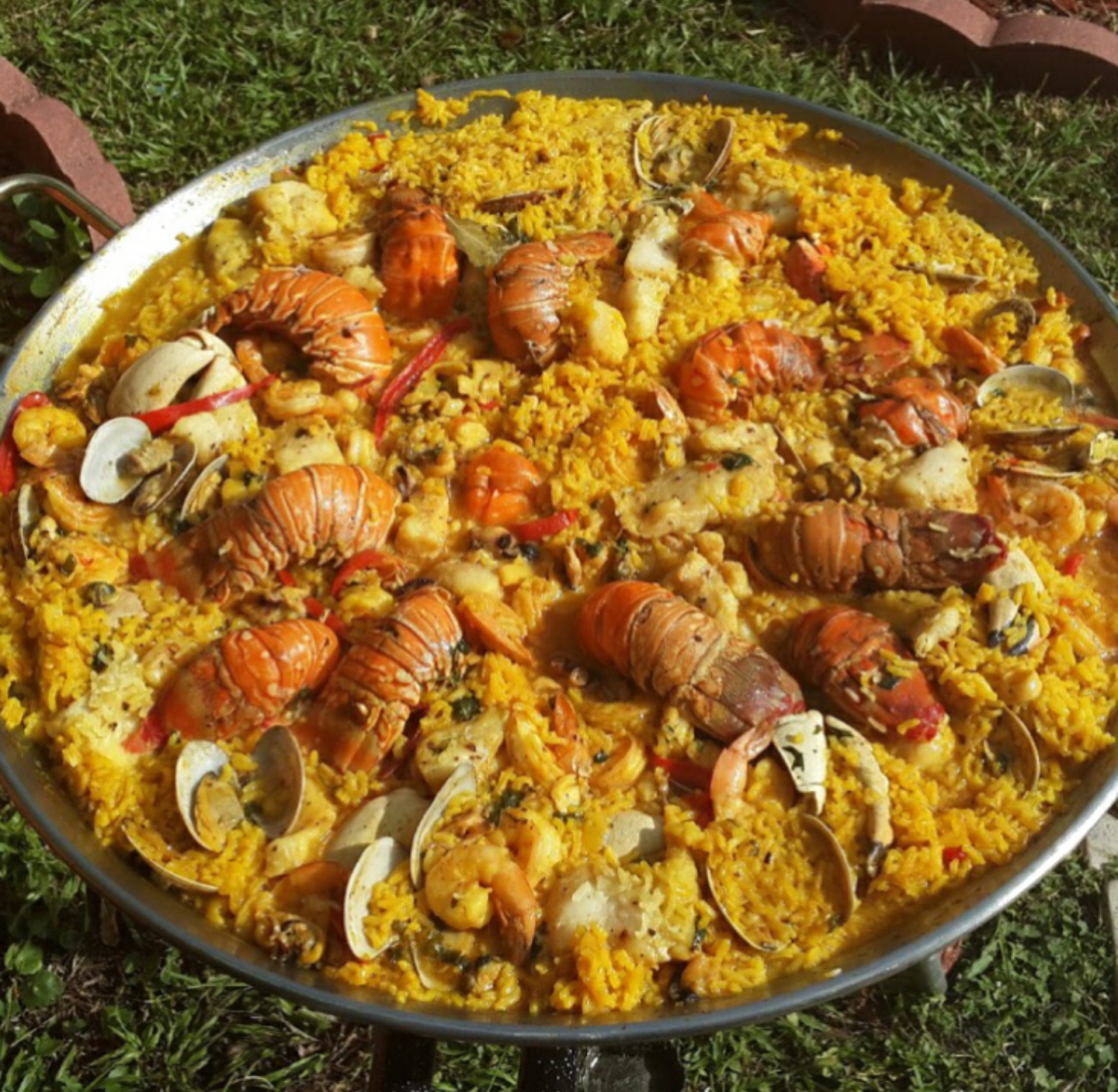 For everyone who has been craving Lobster since the season was closed on April 1, Lobster season is back! 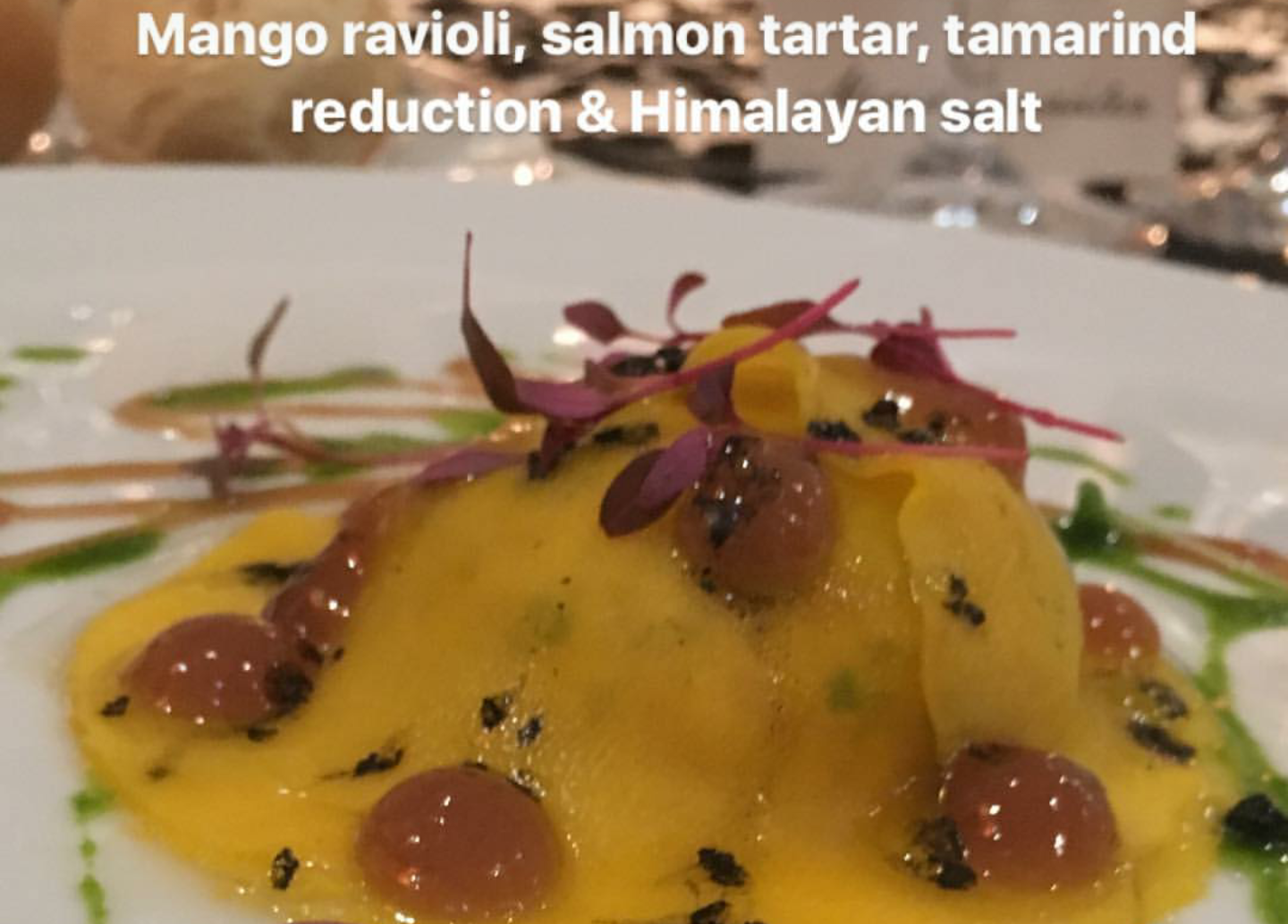 Last weekend’s Iberostar Chef on Tour in Rose Hall, Montego Bay featured its very own Executive Chef Mario González. Chef González is known as a culinary artist and his dishes reflected just that.

The Star Dish of the night for Suga Bear, Tina Davis from Montego Bay, was the Mango Ravioli, Salmon tartar, Tamarind reduction and Himalayan salt. 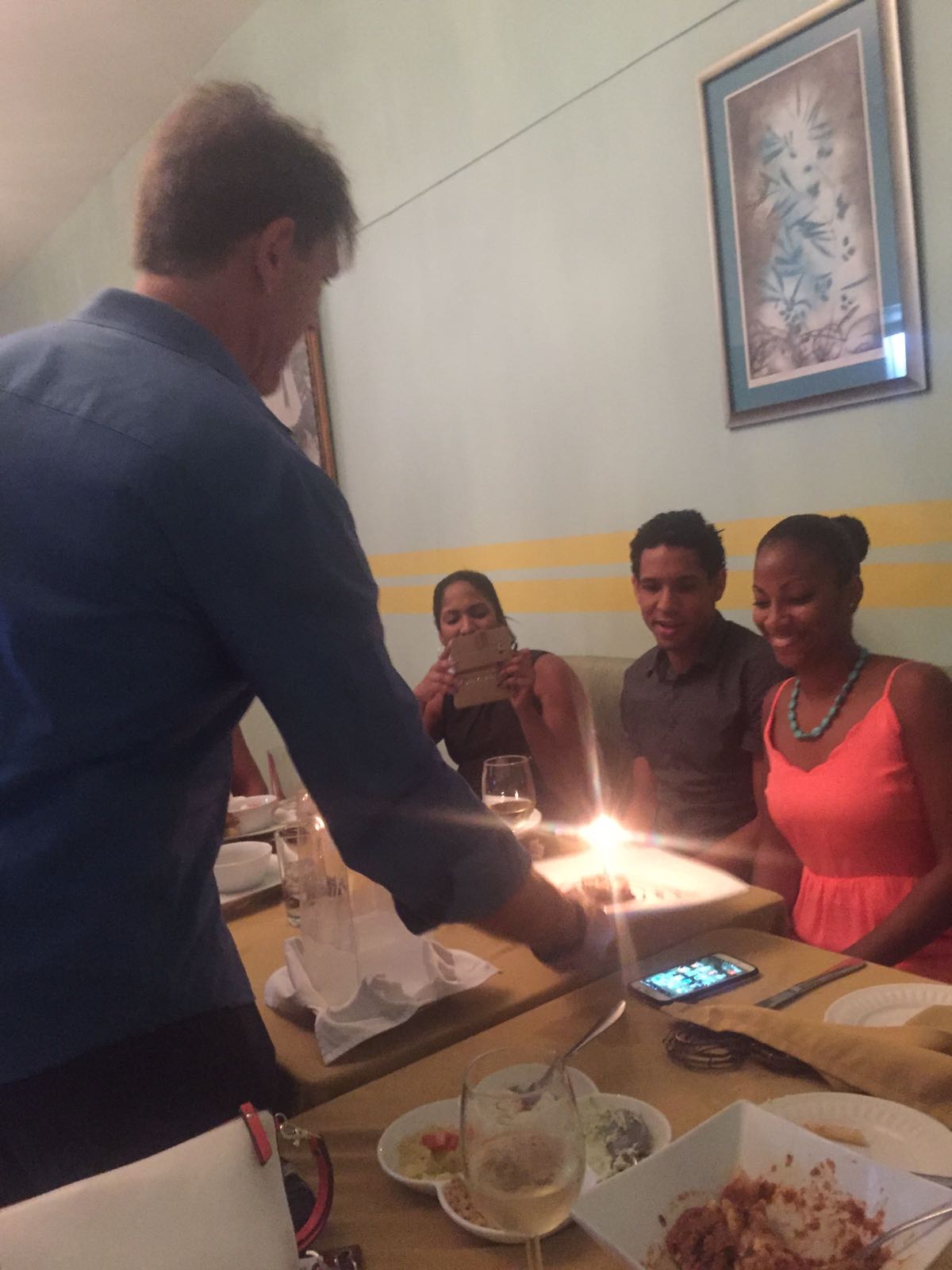 Two Tuesdays ago I visited OPA’s new location at Devon House, which is on the right side after you enter through the front gate. Persons are familiar with that area formerly known as the Devonshire.

The Restaurant was quiet and cosy. I loved the ambience outdoors, similar to a deck in the backyard by the garden. Despite that, we sat indoors. Diners were present but it was not a full house.

The staff were quiet but professional and welcoming. I suppose they were a balance in personality to the owner, Alexx Antaeus who is quite eloquent but warm and friendly.

The menu still consists of Greek favourites from the old location such as Grilled Fish and other Entrées, Pizzas, Pastas and Salads. Not much has changed in that regard. However, the menu has expanded to include additional Mediterranean cuisine options such as Paellas and more.

We ordered a Starter that consisted of 4 Greek Dips served with homemade Pita Bread ($10.35US/$1324JMD) that they make fresh daily with extra virgin olive oil. The Dips were Tzatziki (yoghurt, cucumber, garlic), Tyrokafteri (spicy feta cheese), Revithia (Chick peas, scallions, lemon juice) and Skordalia (garlic, potato). They were all quite tasty and appetizing but I enjoyed the Feta dip the most.

Alexx took our orders by memory and not by hand, which was quite impressive. He offered assistance to anyone who had difficulty deciding what they needed to order and also wanted to put our orders in quickly to the kitchen. He gave us a heads up that they may take a little while.

Well a little while was an hour. Usually we would have gotten ourselves worked up and probably left already, but some of my friends were visiting and we had a lot to catch up on before they left the next day. The Appetizer dips could only go so far and we were sipping on some vino from their list, which seems to have a decent range and selection as usual. We tried the Lamb Gyros Stix ($7.75US/$992JMD) too. That was a small but succulent serving of well seasoned Lamb.

Not only do I respect that we were given the heads up on the wait, but we were checked on periodically and given a joke or two to keep the atmosphere light, like our stomachs at the time.

Finally, attempting to have a healthy night, I had the Psari Sharas (Fresh Grilled Snook basted with extra virgin olive oil, lemon juice and oregano. I’ve had that dish before at Opa, so it wasn’t anything new, but the good quality in taste remained the same and it was just the right portion served with Skordalia (a purée with potatoes etc.) and Greek salad ($20.30US/$2598JMD).

My friends explored other dishes that they enjoyed such as the Gyros entrée of Lean ground Pork served with Tzatziki, Greek salad, Potatoes and Pita ($19.50US/$2495JMD), Shrimp Penne Pasta with minty cream sauce ($23.40US/$2995JMD) and the Kotosouvlaki entrée consisting of Grilled Chicken Breast on a skewer served with Pita, Greek salad and Tzatziki (19.45US/2489JMD).

There was only one unhappy camper who ordered the Kotsi, a slow-baked Lamb Shank infused with lemon, olive oil and garlic served with sautéed vegetables and potatoes ($27.30US/$3494JMD).

Some persons may say they get small servings at OPA, but it really depends on what you order. My friend did not expect such a huge Lamb Shank. While that would make the usual person happy to dig in, being quite petite in size, it was daunting for her.

When Alexx checked on the table a little after we started eating, he asked her what was wrong and she explained. Without hesitation he wanted to know how he could make her happier and she agreed with his suggestions of converting the dish into a Lamb Pasta with her preferred tomato sauce and Penne Pasta. He returned quickly to the table with the transformed dish that he whipped up in the kitchen himself and even gave her some to go in a box so it wouldn’t be too much for her at once. She now joined us as an impressed and satisfied diner.

In discussion with Alexx, we were made aware that they source their meat locally from The Meat Experts Ltd. That is a good look. Meat Experts operates out of St. Ann and they have been making quite a name for themselves with their local, high quality, hormone-free meats.

Then just when we thought Alexx couldn’t be a more hospitable host, he asked if we were dining to celebrate an occasion. He was told my Birthday was coming up and he shared that his was coming up the day before. Fancy that.

He returned with a few members of staff and demanded that everyone get their cameras out and sing ‘Happy Birthday’ to me, while he presented me with complimentary Baklava dessert (Filo layered with chopped walnuts and sweetened with honey). That was a kind gesture. I enjoyed all the love and the Dessert.

I get the feeling something may have been awry with the kitchen or staff that night so I would not let the long wait smear my first experience at the new location. The food was authentic and delicious and I appreciated the great service otherwise. So I will return.

I especially have to have some Drinks by the adjoined Reggae Mill Bar, also owned by Alex, since we missed out on it the last time as we wrapped it up early on the week night. 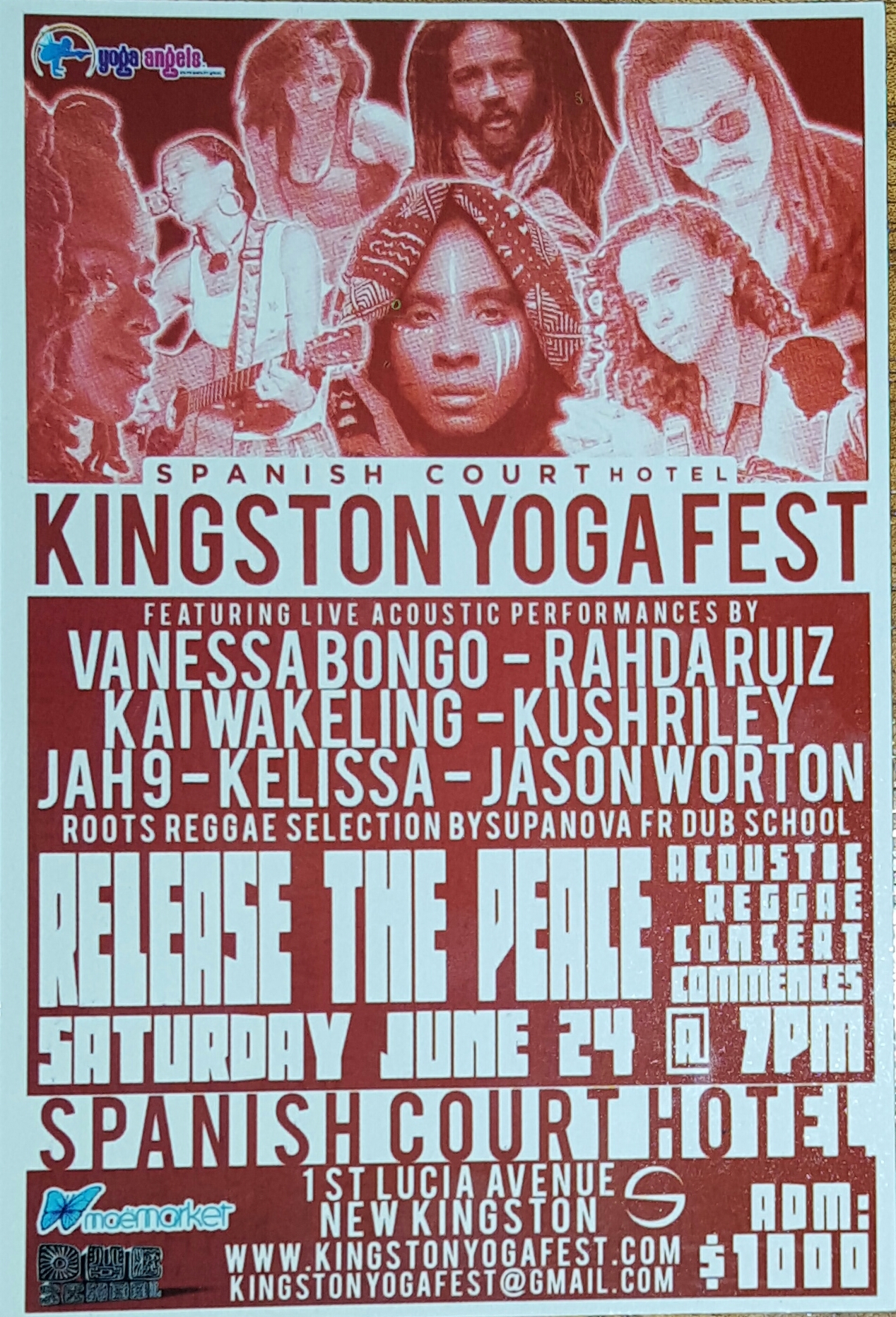 KINGSTON YOGA FEST is this Saturday, June 24 at the Spanish Court Hotel.

YOGA classes will be ALL DAY, starting from 6am and Showtime starts at 7pm with an amazing line-up of Reggae Artists.

Check out the website, http://www.kingstonyogafest.com for information on Tickets, the Schedule, Performers and more.

All Day Passes to include both the Yoga Classes and Music/Spoken Word Concert are available and Students get a special rate. 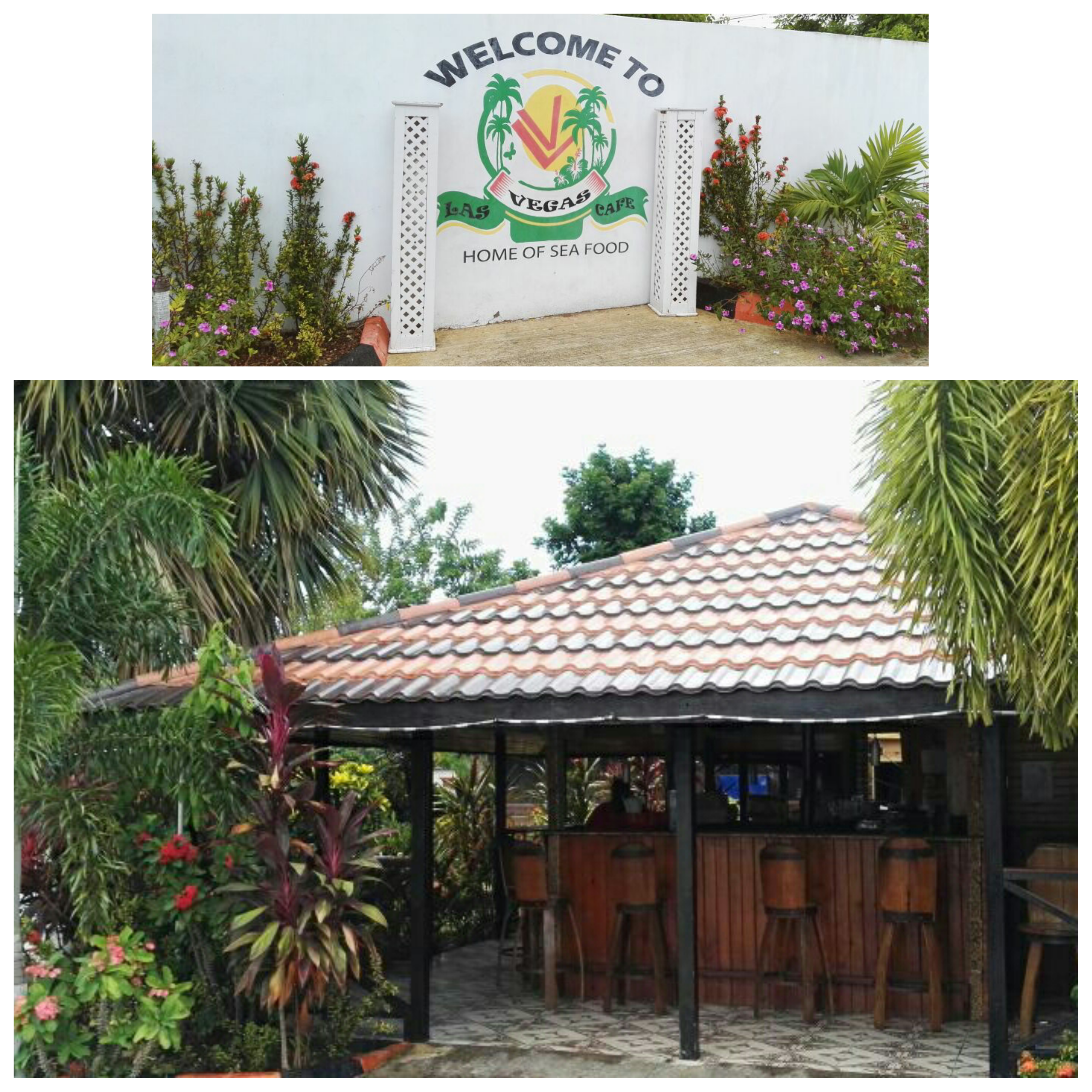 Parking was sufficient and décor was rustic with a touch of old tavern accentuated by the view of the seaside.

There were a few other guests, both locals and tourists.

The staff were not necessarily courteous but they weren’t rude or inattentive either. So they could improve on their Southern hospitality.

Las Vegas Cafe specialises in Seafood. If you order Fish, you are given the option to choose your fish.

Even though their dishes were done to order, it did not take an extremely long time to arrive. The Suga Bears enjoyed their Lunch. The Shrimps were noticeably fresh as one would expect from St. Elizabeth and well seasoned. The Bammy was well steamed with a texture that was just right and the sauce had a good balance of Coconut and Garlic, with neither overpowering the taste of the Seafood.

If traveling through the South Coast, I think it is safe to take a detour or stop by Las Vegas Cafe for a tasty and filling serving of Seafood.