With the help of all who Donated and bought tickets to Suga Lifestyle’s Christmas Connection last December, you helped us feed 200 persons.

Last Friday, the Rotaract Club of New Kingston handed over Food items and bags of Clothing to the Marie Atkins Night Shelter on Hanover Street in Downtown, Kingston. They were able to do this with our help, Grace Kennedy, Rotary Club of New Kingston, Family and Friends.

We would usually to do a Health Fair and Treat for the Day, but unfortunately could not do so in light of Covid. So, our mission is to feed 1000 members of our homeless community by the end of March with Chicken, Rice and other food items. If you can help in any way, please let us know.

Kudos to the Rotaract Club of New Kingston as they truly love what they do and it has been a pleasure for Suga Lifestyle to collaborate with them.

Myriad Edges is THE place for Wooden Crates and Suga caught Myriad Edges’ summer deal with their signature 3-Tier Stand and an 18″ crate!

You can customize your wooden crates based on their size, design and colour. They can be stained, left natural with varnish or painted in vibrant colours.

They believe in simplicity and that our furniture must reflect our way of thinking by being as simple and straightforward as we ourselves. Well, I say some of us!

Check out a few of their creations/storage solutions here:

My order took a little over a week to be ready. Communication was excellent and so was the finish. Myriad Edges is #SugaEndorsed. They are located in Downtown Kingston, but they deliver too!

Location: 105 East Street Kingston (Across from The Gleaner Company)

GW Art Mini Tabletop Paintings are Perfect for your Home or Work Space!

All Tabletops/Desktops including easel cost $1500JMD, except ‘DISCONNECTED’ that costs $2000JMD.

***Delivery is Available too**

GW Art is IN STORE for AUGUST into MID-SEPTEMBER! Get your home, office décor or Gifts!

Kingston Creative Jamaica’s Artisan Store Collective is located at 12 Ocean Boulevard, Shop #2 in the UDC Building beside The Dezign Diva!

Check out this No Commission space that allows local artisans to have a retail space and visibility in the market place.

Sugalifestyle’s GW Art is now IN STORE facing The Waterfront in Kingston Creative Jamaica’s Artisan Store Collective at 12 Ocean Boulevard, Shop #2 in the UDC Building beside The Dezign Diva!

Check out this No Commission space that allows local artisans to have a retail space and visibility in the market place.

Get a Sneak Peek from the soft launch opening of the Artisan Store Collective here!

The store will be open from 11AM-6PM on TUESDAYS – SATURDAYS, *but closes early @3PM on a WEDNESDAY and 11AM to 3PM on Last Sundays during the Cultural Weekend Artwalk

Last Saturday, January 11th was the Rotaract Club of New Kingston’s Treat for the Homeless at the Marie Atkins Night Shelter on Hanover Street in Downtown, Kingston.

Scores of persons left with big smiles on their faces as they were fed, provided with FREE Grooming services, Dental Check ups, Blood pressure, Blood Sugar, Cholesterol, ECG & HIV tests, Eye Screening by the Lions Club of Mona as well as Counseling.

The Rotaract Club of New Kingston thanks all its members and volunteers who assisted them to successfuly execute an impactful project.

Kudos to the Rotaract Club of New Kingston as they truly love what they do.

This Project was Partially Sponsored by Suga Lifestyle.

Tomorrow is the Rotaract Club of New Kingston’s Treat for the Homeless at the Marie Atkins Night Shelter on Hanover Street in Downtown, Kingston!

This Project is Partially Sponsored by Suga Lifestyle.

On January 12, 2019, the Rotaract Club of New Kingston started the new year the right way. They coordinated a Treat for the Homeless at the Marie Atkins Night Shelter on Hanover Street, Downtown, Kingston.

Suga Lifestyle was more than happy to be a sponsor for the event, along with Jamaica Producers, Kirk Distributors Ltd., Cari-Med Ltd., Best Dressed Jamaica Ltd. and Refresh Beauty Soap.

I saw the event through and it was a success once again this year. Persons that lived at the home along with other members of the surrounding community, came out in their numbers to receive various services and items offered such as Medical checks, Dental and Cleaning checks, HIV Screening, Personal Grooming, Eye screening by the Lions Club, Canned Food and Clothing Donations.

Suga was delegated the task of adding a personal touch to speak to attendees about proper Nutrition. Their options may have been limited, but points made by conversations with several of them were of great help. For instance, to choose boiled ground provisions instead of rice and peas or plain rice and to drink water instead of sugary, fruit punch or fruit juices.

Kudos to the Rotaract Club of New Kingston, Sponsors, the Lions Club of Mona, Doctors, Physiotherapists, Dentists, Nurses, Barbers, Jamaica Producers and everyone who assisted to make the Treat for the Homeless a great benefit to our people.

TGIF to this Seafood Cheese Tortellini! Last Saturday I indulged in a creamy, cheesy Seafood Pasta from Ribbiz Ocean Lounge. The Lobster that topped it all off was a bit cold, but other than that, it was quite scrumptious and enjoyable. I wish I could say the same about the limited parking options and intolerable service. My experience was unreviewable. I will not be returning to that location, but the Seafood Cheese Tortellini is on the menu at Ribbiz Ultra Lounge in Loshusan Centre, Barbican! Go get it there!

Have a great weekend!

It was like Spa Day and a Health Fair all in one for Downtown’s Homeless last Saturday at the Marie Atkins Shelter.

The homeless had their Medicals done, Teeth cleaned by the Jamaica Dental Students’ Association, Hair groomed by the Kingston Central Police Division and Kumeas Hair Perspective and Eyes tested by the Lion’s Club of Mona.

Canned food was donated to the Shelter and Clothing and Care Packages including Toothpaste, Toothbrushes, Soap etc. were distributed to the members of the Homeless Community of Downtown, Kingston.

Kudos to the New Kingston Rotaract Club for hosting a day that surely should have made an impact on the lives of many Homeless persons. Of course they couldn’t have done it all on their own. Many Organizations joined efforts for the cause.

Follow The New Kingston Rotaract Club on Instagram, @nkrcjamaica and see how you can join the Club, participate or donate to their Projects. Help to Build a Better Jamaica.

One Jamaica. One Love. 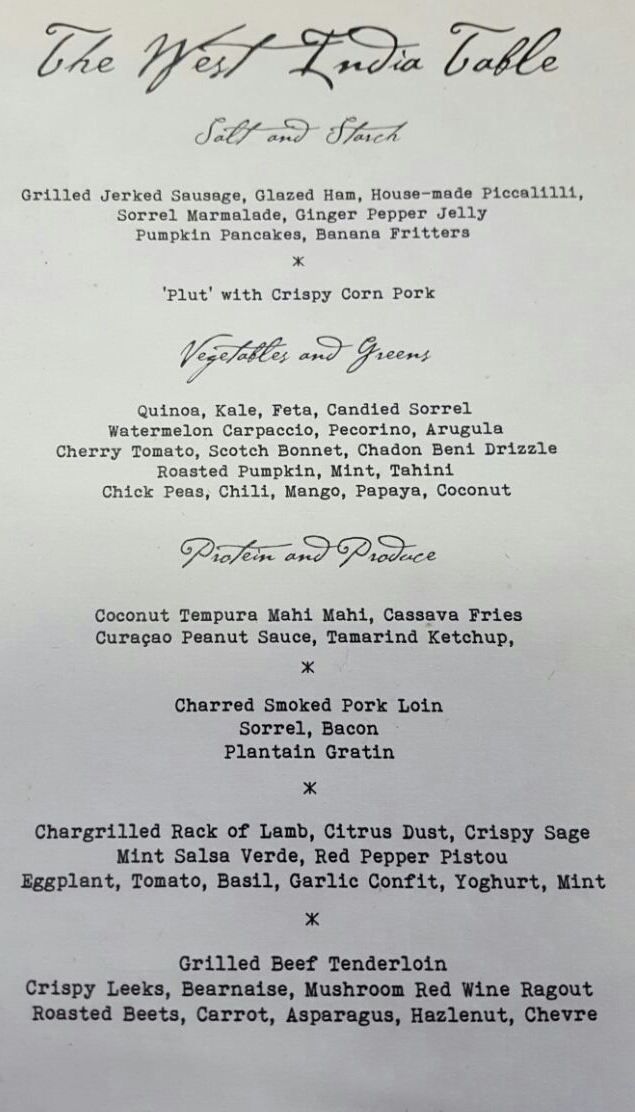 Suga brought you the low down for Crisp at The Gardens, Jamaica Pegasus ($5000 All Inclusive) and Picante ($7500 All Inclusive) at The Ruins, UWI Mona’s Visitor’s Lodge, so how were the other JFDF events? Suga Bears and Suga Daddies reported!

Most persons like to get bad news out of the way first. The events with the highest price tags were not that impressive for some patrons. That is, Vintage for $12000JMD all-inclusive and Brunch at the Gallery for $20000JMD/$150USD all-inclusive.

Meals at Vintage at the Manor in Jack’s Hill were described as basic and a low standard for Ortanique on the Mile, one of the restaurants in Florida that was represented by Owner Cynthia Hutson. Suga Bears enjoyed the view and Dessert though.

Brunch at the Gallery

Brunch at the National Gallery, Downtown Kingston presented by Suzanne and Michelle Rousseau was decorated beautifully by Tai Flora and had a sufficient selection of Wines by Select Brands, but the service of food was slow and it arrived to tables cold. The Brunch was from 11am to 4pm and after a long day, patrons were leaving at 4pm and Dessert was just being served. Should the blame go on the Event Planner, the Chefs or both? It was stated that the execution was poor.

The Presentation of some of the meals were also quite sloppy to say the least.

Did the Incredible Hulk have an accident here?! I was in disbelief and gathered that this was the consensus amongst most tables. This looked nothing like the neatly displayed dish on the Event’s social media page. Cold food, slow service and poor, unappetizing presentation is unacceptable for $20,000JMD. I believe things can be shaken up next year. There are so many other talented, efficient Chefs around and I understand the ambience of The National Gallery, but a change in venue could be considered as well.

Kudus to award-winning baker, Nadine Burie that probably saved both events. Her desserts are offered at Cafe Blue.

Setting bad news aside, persons fully enjoyed Meet Street and the Market in Downtown, Kingston ($500JMD entry) last Saturday. A patron said she did not know that Downtown could be so nice. The set up and atmosphere was phenomenal and the vendors outdid themselves.

Pork Palooza ($6500JMD All Inclusive) at Palm Drive, Hope Gardens that kicked things off for the festival on the Saturday the week before was a hit. The event is usually the favourite for Patrons. Jamaicans love their Pork! It wasn’t the unanimous favourite this year though.

Close call! It has been narrowed down to the new event, Chop Stix ($5000JMD All Inclusive) held at Zen Lawn, Hope Zoo last Wednesday that featured fare from the far East and the zesty, Picante!

Based on Food, Weather and Vibe, Chop Stix gets the edge. Picante had the on and off rain, which was uncontrollable with provisions put in place, but Jamaicans love a new event.

The Chefs, Caterers and Restaurants delivered at Chop Stix! Here was the Menu if you missed it. Chop Stix can’t be missed next year!

So what’s next for my Foodies? Restaurant Week!

Yes, I know Restaurant Week has lost its steam. Marketing has been ongoing but should be revised, including the selection of Ambassadors. JFDF being so close to Restaurant Week definitely overshadowed it.

Menus for Restaurants are more of the same, but it makes your choices that much easier. The good ones will pop out at you. So that means you may need to make reservations quickly or maybe not, because places I called yesterday that are normally booked out weeks in advance seemed to have quite a bit of space left.

For now, I am leaving you with my recommendations for the Epicurean and Delectable Categories. Here you go!

> The Terra Nova All Suite Hotel in Kingston.

Despite inconsistencies in service and quality throughout the year, they have managed to keep a good reputation for Restaurant Week so far.

Sidenote: I do not think any Restaurant in Market Place should be placed in the Epicurean Category. The venue is far too casual and a long wait is usually expected.

Out of town? Marguerites by the Sea, Montego Bay. You should expect a spectacular dinner and service with a seaside or picturesque garden view.

There are some other reputable Restaurants listed, but the lack of creativity with their Menus were the deal breakers.

Nirvanna Indian Cuisine, Centro-Courtyard by the Marriott and Black Orchid Restaurant at Eden Gardens would be secondary choices.

In the other city? Both options from Mobay are primary choices – Mystic Thai and The Houseboat Grill. So persons can choose between the two based on the Cuisine desired.