Favourite and no. 4 seed Simona Halep was upset by the unseeded Jelena Ostapenko. She beat Halep 4-6, 6-4, 6-3 and got a great Birthday present!

Ostapenko had beaten Timea Bacsinszky in the Semis, who had eliminated Venus Williams.

Until the Men’s French Open Final, ensure that you watch the legend of Athletics, Usain Bolt run for the last time of his career on home soil at the Racers Grand Prix at the National Stadium in Kingston, Jamaica at 10:10pm!

How could we forget about Karolína Plíšková?! The rankings of players differ on the various websites, but according to the WTA Rankings, Plíšková is ranked closely behind Serena Williams at No. 3.

The experts have favored Simona Halep (4) to win her first ever Grand Slam title at Roland Garros. Elina Svitolina (6) is also a popular pick. It turns out that Halep and Svitolina will meet in the Quarterfinals and the winner could play Plíšková in the Semis.

Caroline Wozniacki (12) is still in it. She has come close to winning a Grand Slam a few times. Her Quarterfinal was suspended due to rain at a set a piece between her and Ostapenko.

Timea Bacsinszky (30) who eliminated Venus Williams is also playing in the Quarterfinals today but her match was suspended as well versus Miladenovic. Bacsinszky was up a set.

Wozniacki and Bacsinszky could meet in the Semifinals.

Although Rafael Nadal (4) is not in his prime, the ‘King of Clay’ is still in it and has been playing well. Of course we know that he could meet Novak Djokovic (2) in the Semis. But Djokovic has the challenge of defeating Dominic Thiem (6) in the Quarterfinals first.

Marin Cilic (7) defeated Gaël Monfils and will play Stan Wawrinka (3) in the Quarterfinals.

World no. 1 Andy Murray will play Kei Nishikori (8) in the Quarterfinals.

Suga thinks we may have a Murray-Wawrinka Semifinal. 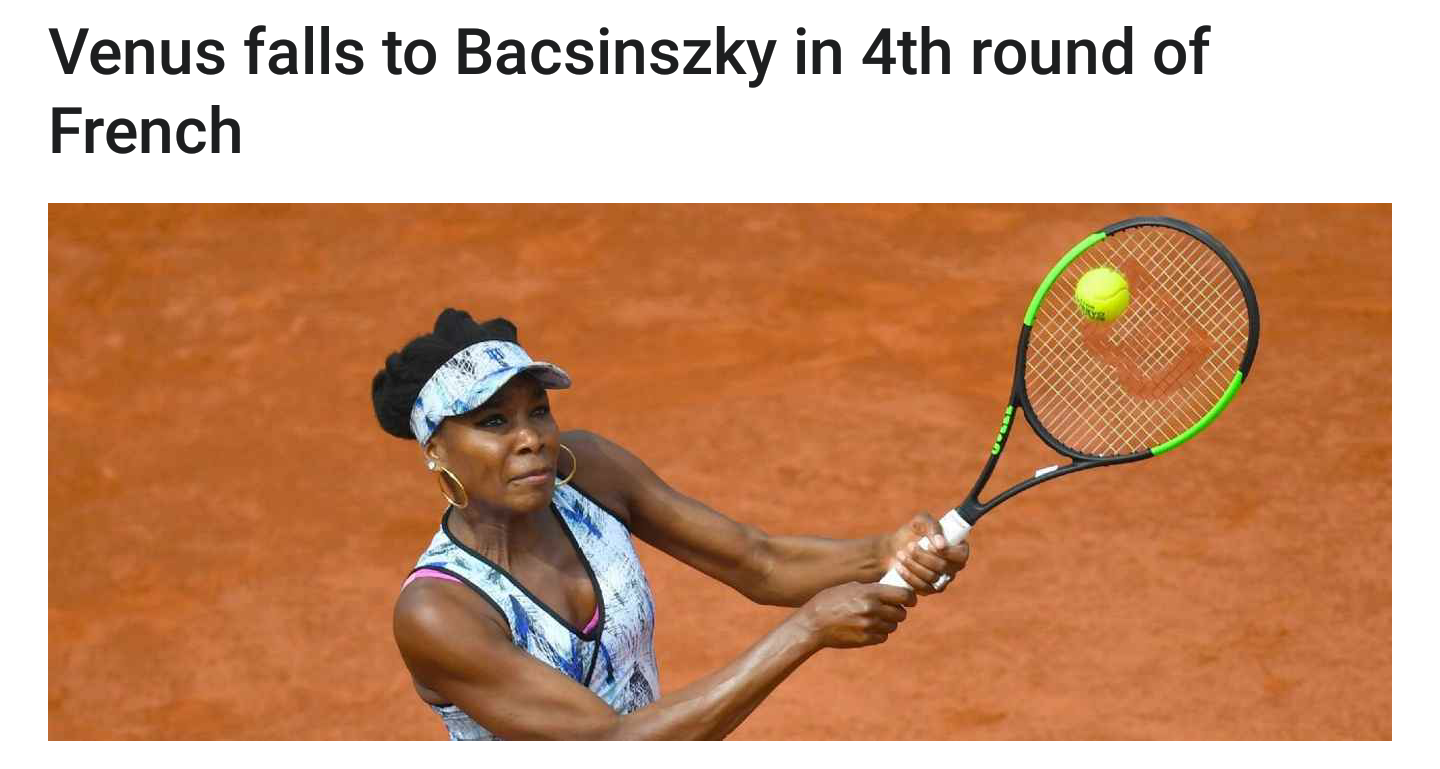 There will be a new French Open Winner for the Ladies this year, as Garbiñe Muguruza and Venus Williams were both eliminated yesterday.

Venus was eliminated by Timea Bacsinszky of Switzerland for the second year in a row. Venus now looks forward to Wimbledon.

Novak Djokovic and Rafael Nadal continue on their collision course to the Semifinals. They both beat their opponents in straight sets to advance to the Quarterfinals.

World No. 1, Andy Murray advanced to the 4th round.

Coach Steve Kerr returned to coach the Warriors in the Finals, starting with Game 2. The game seemed close up to Half Time with the Warriors only up by 3. After that, Kevin Durant (KD) was unstoppable with 33 points and Steph Curry stepped up with 32 points to lead the Warriors to a 132-113 win and a 2-0 lead in the series. Even Klay Thompson got to find his rhythm and contributed 22 points.

Cavs’ LeBron James who scored 29 points, 11 rebounds and 14 assists, tied Magic Johnson for the most NBA Finals triple doubles. But it wasn’t enough for his team to win, despite 27 points from Kevin Love. Kyrie Irving was only able to score 19 points.

KD’s defense to offense was sensational.

The Cavs are in the same position as last year’s Finals, but versus a team who now has KD. After last night you cannot help but think a sweep is possible, but Suga thinks the Cavs may win Game 3 at home and sees the Warriors winning the Finals 4-1.