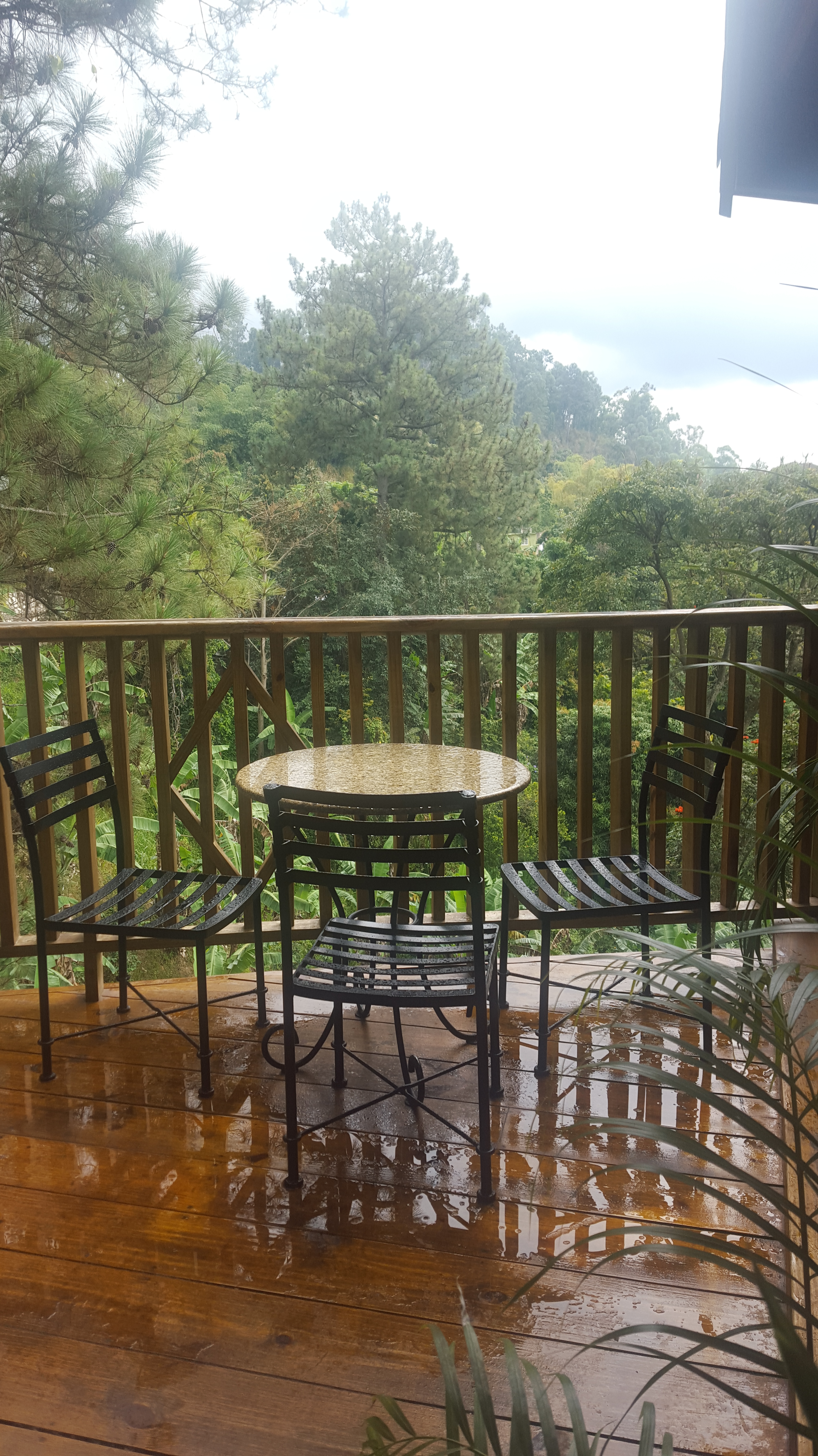 Comments: I went specifically for the Oxtail, but the quality has fallen off majorly. It lacked seasoning and did not slide off the bone this time, but still had good texture. Diners at another table were expressing the same sentiment. The taste of Coffee was lost in the Coffee infused Chicken. Both dishes in chipped plates were served with Steamed Vegetables and Rice and Peas, but were swimming in gravy. Mediocre service and food with a breathtaking view.

Comments:  Staff was pleasant but inattentive. Crystal Edge’s staff were seen more around that side than the Café Blue waitresses. Desserts were dry. We had the Chocolate Mocha Cake and Strawberry Cheesecake.

For such a long commute, disappointing experience thankfully overshadowed by the picturesque view of the Blue Mountains with cool, fresh air and the taste of rich, authentic Blue Mountain Coffee.

After the boost of the Jamaica Blue Mountain Coffee Festival 1 week before my visit, I expected more from Crystal Edge and Café Blue. Hope they get back on track soon. Not worth the drive.

Strawberry Hill is now charging $2500JMD at the gate to include a welcome drink if you do not have a booking or reservation.

I was passing by for a drink in between Breakfast and Lunch. So for persons like myself and others who happen to be nearby and spontaneously choose to stop and may end up staying for Lunch etc., I think an entry fee is ridiculous. It would be similar if The Jamaica Pegasus would charge you to enter.

Stay tuned next week to see where is worth the drive on the Blue Mountain Culinary Trail! 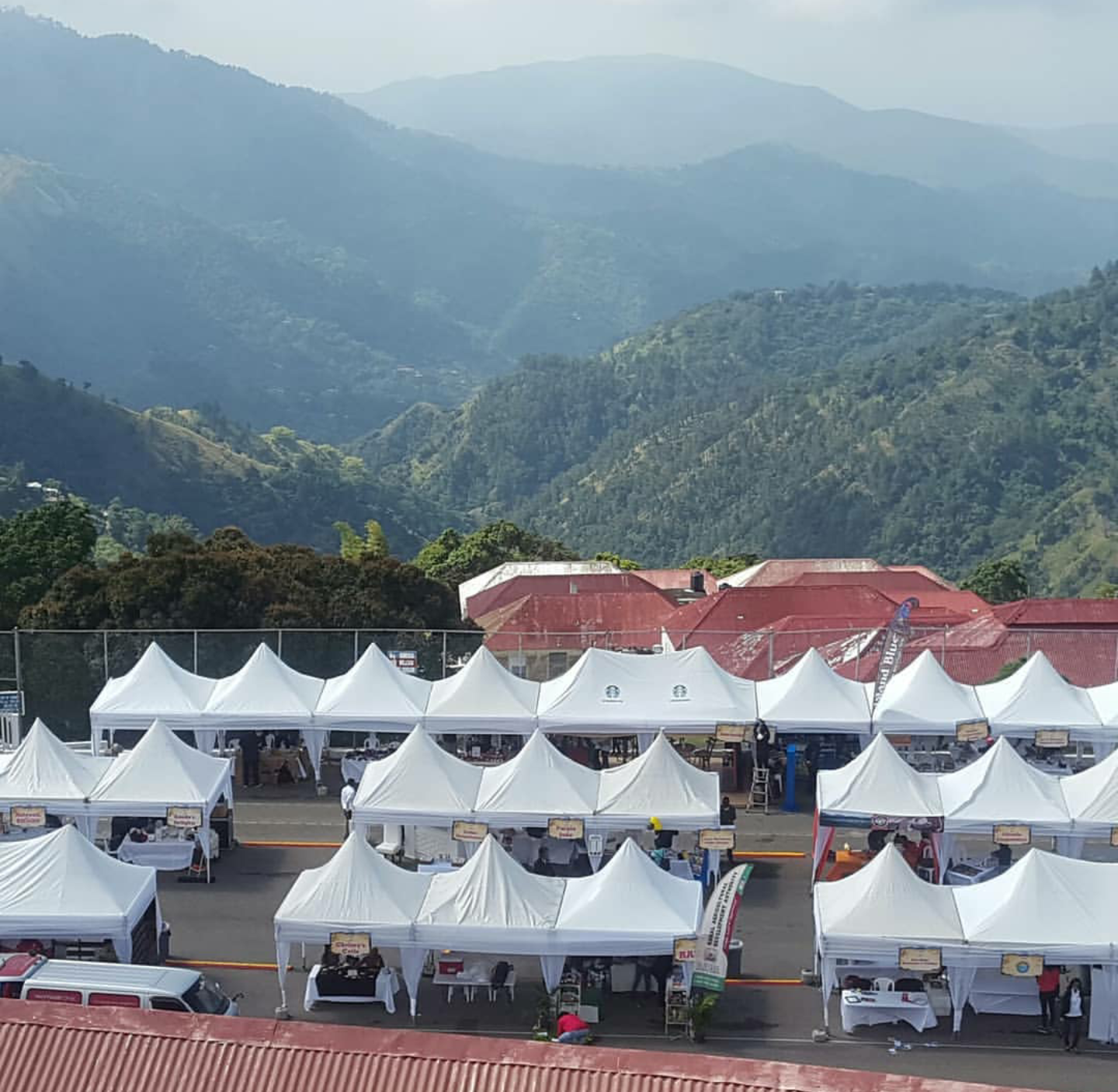 Coffee producers and baristas were out in their numbers last Saturday at the Jamaica Blue Mountain Coffee Festival Marketplace in Newcastle, St. Andrew.

Cafe Blue also had their Milk and White Chocolate covered Coffee beans that I enjoy.

My husband enjoyed the smooth, hot brew offered by Perk up, from Flamstead Estate. Perk Up had a soft launch at the Coffee Festival, as they are planning to enter the market more competitively. They are currently at a few cafe outlets, including Shelly’s Cafe at U.T.E.C.H.

Deaf Can Coffee Baristas were there, brewing at 3 different tents including Cannonball Cafe and Jamaica Toyota Coffee House.

I was impressed with Cannonball Cafe that uses Jablum Coffee. They were the only ones I saw that offered Frappes and Coffee Martinis. I had the Caramel Crunch Cafe Frappe for just $300JMD. They had Paint and Sip for $1500JMD along with a free Espresso Martini overseeing a picturesque view too! There were cold brews from Cafe Blue and Stoneleigh, but I prefer Frappes.  Even though it was a cool atmosphere being up so high, the sun was still fully out and I warmed up after walking around the venue.

Cannonball’s coffee infused desserts were a treat too! My nieces and I enjoyed their Coffee and Chocolate Brownies for a steal of $100JMD, Mini Eclairs with Coffee infused cream ($300JMD) and Coffee Bread Pudding with Coffee glaze ($300JMD).

Restaurants other than Cafe Blue that are on the Blue Mountain Culinary trail were out, such as Belcour Lodge with their line of Preserves and Blue Ridge Restaurant and Cottages. Blue Ridge had a tasty Coffee Cake for $300JMD.

The experienced and poised hostess, Emprezz kept the patrons well-informed throughout the day and presented prizes and surprises, hosted short interviews and more.

The suits of Tourism came out, shook hands and spoke to the patrons. Minister of Tourism, Edmund Bartlet along with his entourage, as well as Adam Stewart, Chairman of The Tourism Linkages Council were there. The council has been making great strides, developing projects to increase our influx of visitors to Jamaica via the Gastronomy network, Shopping, Health and Wellness, Sports and Entertainment and Knowledge. The Jamaica Coffee Festival Marketplace branched out across all these networks, with major focus on the Gastronomic Network. Key initiatives and Projects such as development of a Blue Mountain Coffee experience, strategic partnerships with other networks and the promotion of food festivals were all achieved. Kudos to them and the great turn out of patrons to support such an important initiative. Tickets were sold out!

If the endless amount of coffee wasn’t enough, Tarrus Riley entertained the crowd for over an hour!

CB Chicken, Copperwood Pork and Best Dressed Chicken were out to feed the masses. The Best Dressed Booth was quite popular with their Gourmet Hot dogs, loaded fries and more. I enjoyed their Jerked Chicken.

Island Blue, which you normally see in our hotels, displayed and sold their Jamaica Coffee Liqueurs from Baronhall Estate, Coffee Beans, Branded mugs and more.

Kande’s Delights had long lines for ice cream including coffee flavours of course.

Various Arts & Crafts exhibitors were about, but one of the Skin Care exhibitors, I Love Sweetness Coffee Scrubs grabbed my attention with their body scrubs, scented soaps and skin tonics. Their representatives were quite knowledgeable about their products and marketed them well.

Hollywell provided information on tours and events, signing persons up to receive information on events in the future too. They also had persons chatting up a storm about their Coffee Rice and Peas cooked by ‘Natural by Nature’ in their community. 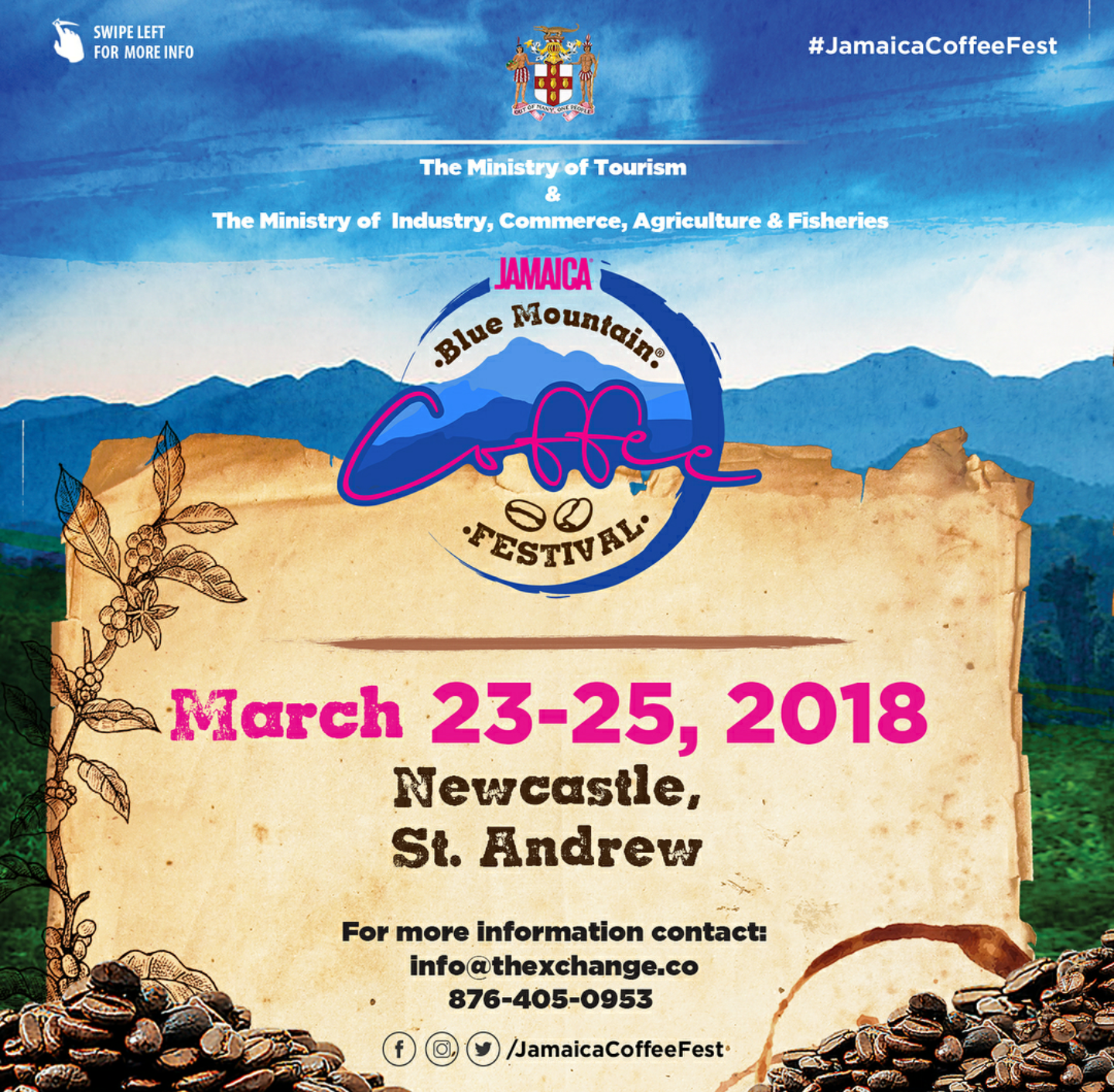 The Coffee Industry Players in association with JACRA and RADA will be busy hosting workshops.

Do not miss The Festival Marketplace! It should be a cultural experience showcasing not only our local coffee and coffee-induced products, but our talented crafty artisans, dancers, singers and more, headlined by Tarrus Riley!

The shuttle departs hourly from UTECH starting at 9am and Tickets cost $1000JMD for Adults and $500JMD for Children under 12 and Students with ID. The Festival ends at 6pm.

Take a drive along the Blue Mountain Culinary trail. It has some cosy spots with spectacular views and food. See the list with numbers on the flyer below, call and make your reservations today!

They are all quite a treat, but if you like local cuisine, Crystal Edge is the place. If you have a sweet tooth, Cafe Blue is just next door with exquisite desserts by award-winning baker, Nadine Burie.

Blue Ridge is far up, but worth the trek. Savoury food and good service. Their presentation is also one of a kind.

The Ministry of Tourism and The Ministry of Industry, Commerce, Agriculture and Fisheries will be hosting a Festival for Jamaica’s flagship Blue Mountain Coffee this March 23-25, 2018 in New Castle, St. Andrew.

They promise an immersive experience from farm to cup and table!

SuGa Lifestyle has kept readers up to date for the past year on Restaurant Ratings and Reviews, Recipes, Health and Fitness, GW ART, Charities and What’s Hot, for instance with popular Sports events or tournaments. Restaurant Reviews continuously proves to be the most popular posts amongst readers.

Conceptualizer, Gabrielle Williams has traveled across the United States, the Caribbean and as far as Japan, where the local cuisines and fine dining options are a must stop. On most weekends, regardless of which parish or country she may be in, she can be found satisfying her fancy of exploring the culinary talents on offer at the restaurant of her choice.

Gabrielle also had the pleasure of being a Table Talk Observer Food Awards Judge for 2014. She will unhesitatingly give restaurants, chefs or caterers fair recognition for their good work, objectively highlighting those that have been inconsistent, mediocre or low in quality and by offering suggestions for general improvement.

What is considered as a simple website with a slow start and hardly any promotion, has attracted over 7600 hits and readers each month from as far as Spain, Bulgaria, Israel, Italy, Malta, India, Algeria, Thailand and Uganda to name a few and sustains consistent readers from the USA, Canada, Barbados, UK, Cayman Islands, Brazil and ofcourse, Jamaica.

SuGa Lifestyle is happy to receive the continued support and feedback from its readers, whether it’s from Facebook, WordPress, LinkedIn, Google Groups, Twitter, word of mouth or other sharing avenues and looks forward to being a part of the journey of Jamaica rising as a Foodies Paradise.

Keep on reading SuGa and continue to make us the Go-to website to keep you in the know and aid in deciding on your dining destination. Thanks SuGa Readers!