The Greatest Show on Earth begins today! World Cup 2018 kicks off with its Home country, Russia versus Saudi Arabia!

*All times are Eastern Standard Time*

Can Portugal or Spain create an upset?

Can Lionel Messi finally win a World Cup with Argentina? Congratulations to all winners this weekend! Huge Congrats to Serena Williams for finally hitting 22. She now ties Steffi Graf for winning the most Grand Slam titles in the Open Era. Margaret Court still stands at 24.

Congrats to Venus Williams for winning her 6th Doubles Wimbledon title with Serena. It has been a struggle for her since diagnosed with her autoimmune disease but she has never given up. She made it to the Semi Finals of the Singles in Wimbledon and did well in the Doubles to win the Finals with her sister.

Andy Murray won the Gentleman’s title in straight sets as well. Congrats to him.

For the big winners of the weekend, Portugal! EURO 2016 Champions! Should I also say Cristiano Ronaldo? He came off the field after about 25 minutes with an injury to the knee but he won from the sidelines. How does the great Lionel Messi feel now? He didn’t rally his team together like that. It is hardly likely they will ever get that opportunity again to win an International title. Congrats to them for seizing the moment.

Athletics
Dafne Schippers ran 10.90s for the 100m in the European Championships. Although she had no competition, I expect her to be more impressive in the 200m at RIO. I haven’t seen her time for that as yet.

At the US trials, Justin Gatlin had to run for his life after running 2nd in the semis and getting lane 8 for the final. He beat LaShawn Merritt (19.79s) and Ameer Webb in 19.75s.

For the 200m, Allyson Felix did not make it! Prandini edged her out for the 3rd place spot and it was all about Tori Bowie who won in 22.25s.

The Women’s 100m Hurdles was one to see! Such a packed field. Dawn Harper did not make the finals. Jasmin Stowers fell before the line, Sharika Nelvis did not make it and one of the favourites, Keni Harrison who ran 12.24s this year did not make ut either!

The US Men’s 110m hurdles had a new winner, Devon Allen! David Oliver did not run the final. He had a hamstring injury after the semis. Aries Merritt and Jason Richardson also failed to make it.

Gabby is back! After falling on the beam Friday night at the US Gymnastics trials and again last night, Gabby Douglas still made the US Fierce Five team for her solid routine on the bars.

Congrats to Gabby and the other 4 who made it, especially Simone Biles who won it all. That team is probably one of the hardest to make. Looking forward to seeing them in RIO! 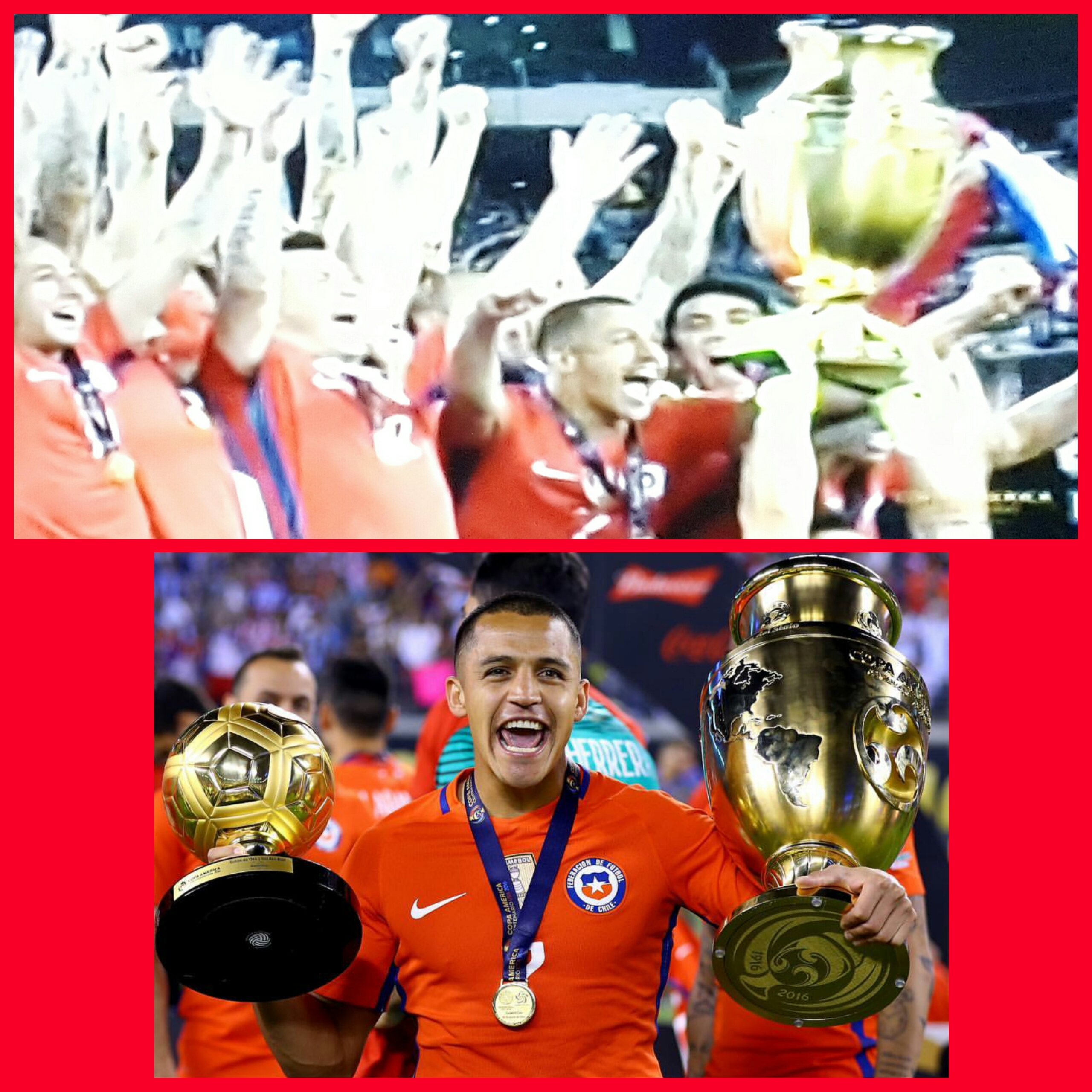 Congrats to Chile on their 2nd COPA America title and to Alexis Sanchez for winning the Golden Ball!

This COPA America final was dramatic from start to finish with Chile’s Diaz getting a red card early (28′), which he didn’t deserve, then the referee seemed to even things up about 10 minutes later, giving Argentina’s Rojo a red card, who didn’t deserve a red card either in my opinion.

Both teams battled back and forth with 10 men, hardly any shots on goal, neither really controlling possession and then Argentina eventually took control of the game for a short period of time. Both teams were scoreless at 90 minutes, it went into Extra time and the scoreline remained nil all.

The Final then went to Penalties. We all know that Chile’s Goalkeeper, Claudio Bravo (who won the Golden Glove) would save at least one, so more pressure was on Argentina.

Then the heartache came as Captain Lionel Messi stepped up first as usual to lead Argentina with all the pressure on his shoulders to try to finally win an International title. Then he did a Baggio and missed! Bravo didn’t even dive that way. He was visually very disappointed in himself.

Chile also missed, then the next 2 for each side scored. Bravo then made a save, Chile scored and just like that it was 4-2 to Chile, it was all over and Messi was in tears.

Messi told reporters after the match that he wants more than anyone to win a title with the National team. He said he has tried everything possible and that’s four finals lost. Although in the heat of the moment and very frustrated, he said he may never play with Argentina for an International competition again and stated ‘this is not for me’.

At least Messi has an Under 20 World Cup from 2005 under his belt but it clearly doesn’t do his greatness justice. With his goals scored in this COPA America, he is now the all time leading scorer for Argentina with 55.

Let’s see if the GOAT keeps his word! In the Semifinals of COPA America this week, Argentina destroyed the USA 4-0 on Tuesday and Chile beat Colombia last night with a rain delay during the match, 2-0.

Messi scored his 55th International goal on Tuesday in the 32nd minute that was a free kick vs USA. It was a spectacular free kick in the corner of the net. He now leads Argentina scorers in goals surpassing Batistuta who had 54. Messi also had 2 assists. Higuain scored 2 goals.

Messi is looking to make a stamp on his International legacy. He really just needs to win a World Cup to seal the deal, but even if he doesn’t, his greatness can never be denied.

USA will face Colombia for the 3rd place match of pride this Saturday at 7pm.

Chile the defending Champs, won 4-1 versus Argentina on penalties last year
Who will take it this year?

Let us see this Sunday at 7pm! 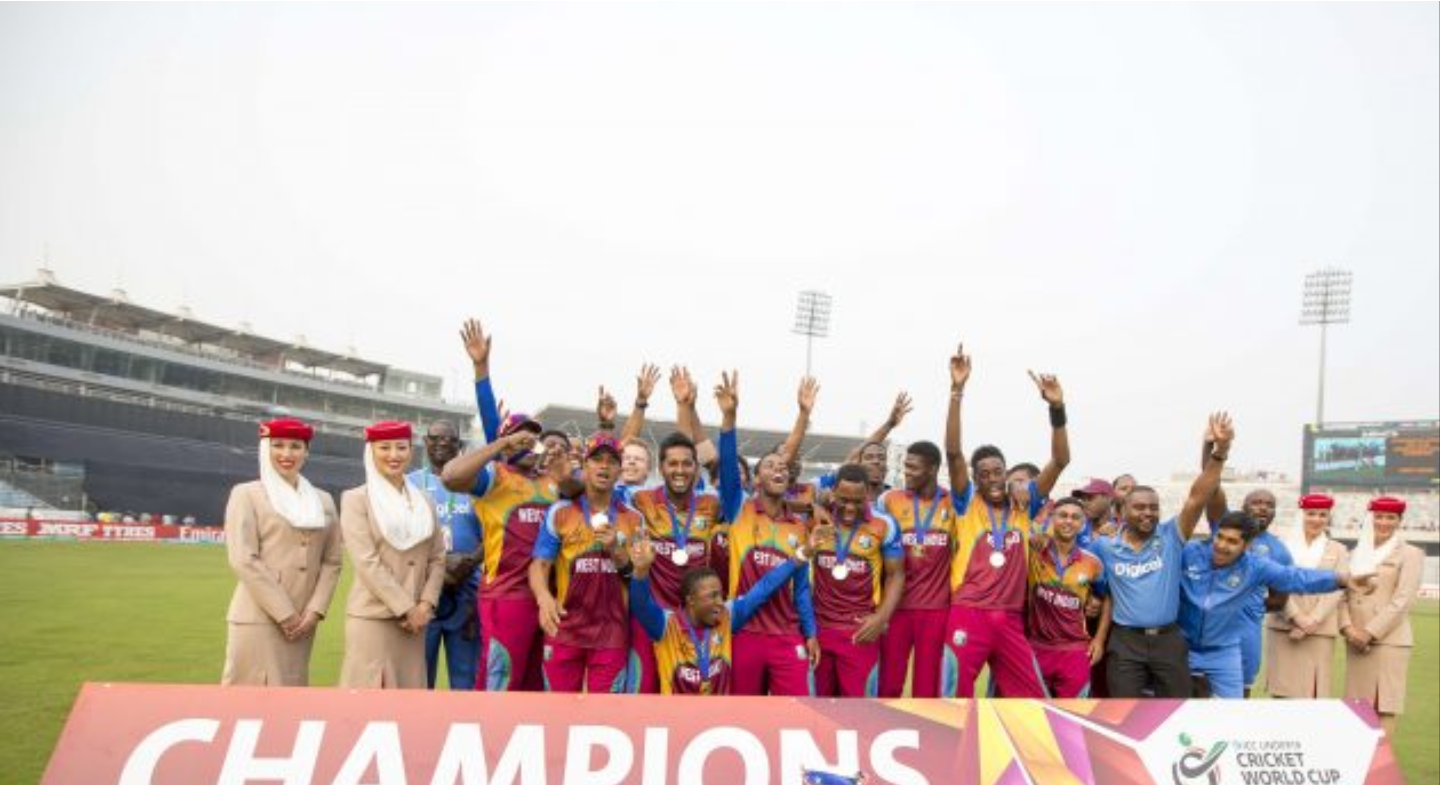 The West Indies Under 19 Cricket Team won the ICC World Cup vs India! Signs of a good future? Maybe not. They only scored 146 runs in 49.3 overs to win, however the bowling and fielding were impressive.

It is the first major title on any level that the West Indies has won since the senior team won the ICC World Twenty20 in 2012.

Arsenal put a dagger in Leicester’s campaign to win the Barclay’s Premier League title yesterday with Welbeck’s header in stoppage time to seal a 2-1 victory.

Leicester’s only goal was from a penalty kick at the end of the first half that probably shouldn’t have been awarded. They got a red card at 54′ downsizing them to 10 men, then Walcott of Arsenal equalised at 70′.

Here is a look at the BPL table now:

There was exciting action in La Liga yesterday too. Lionel Messi had an unbelievable Penalty kick, where it was Barcelona 6-1 Celta Vigo! Watch it here!

Zach LaVine and Aaron Gordon put on a show for the Slam Dunk Contest! Zach LaVine reclaimed his title from last year with all 10s.

Russell Westbrook got MVP for the 2nd straight year with 31 points.

Paul George of Pacers was on fire with 41 points, just 1 point shy of Wilt Chamberlain’s record of 42 for the most points scored in an NBA All-Star game. Paul George also had the most 3-pointers in the game with 9.

This was also Kobe Bryant’s last All-Star game. All the greats were there to watch including the Greatest of all time, Michael Jordan a.k.a MJ. The commentator confirmed it saying, he IS still the greatest of all time. MJ sent his best wishes to Kobe. The other ‘MJ’, Majic Johnson also did a tribute. Kobe follows the 2 MJs with his level of skill and greatness. Kobe we salute you! 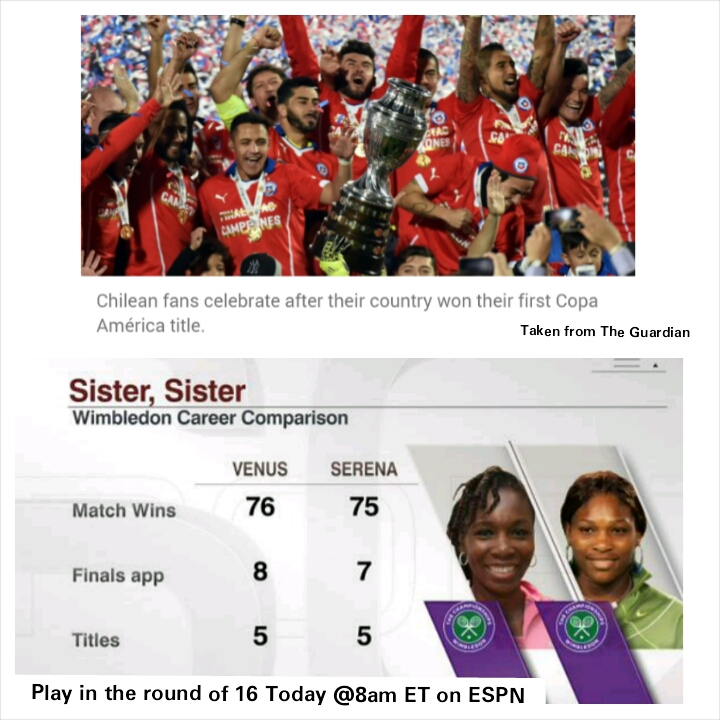 Last Saturday, Chile won Copa on Penalties! Argentina missed 2 penalty kicks and Alexis Sanchez closed it out with a cheeky penalty kick to the centre of the goal as the Argentina keeper flew to the right!

Messi was totally shut down by Chile’s defenders and nobody else from Argentina stepped up to the plate with DiMaria out in the 1st half with an injury. Argentina can give thanks for Mascherano, aka the defensive genius. So the score was 0-0 into overtime. Then Penalties. Chile played their heart out. Congrats to them!

Today is also considered the BEST DAY IN TENNIS with ALL ROUND 16 matches being played in 1 day at Wimbledon. Matches to see?! Serena Williams continues her mission to complete her Serena Slam, i.e. to become the first player since Steffi Graf in 1988 to accomplish the Calendar Grand Slam. However, she will have to beat her sister, Venus Williams today who has been playing very well to continue her mission. Serena has not been at the top of her game so far this Wimbledon and has been using pure emotion to carry her through, but that will not work against her sister. Serena needs to raise the level of her game if she wants this win. They have not met in a while, as it will be their 1st Grand Slam vs each other in 6 years! It will be interesting to see how it plays out, but Suga doubts it will be easy for Serena. Even past rival, Martin Hingis has finally given the  Williams sisters props for still being out there, playing competitively at their age, while she can only be found in the doubles draw. Look out though, Hingis still has a chance this week to derail one of the Williams sisters. She is mentoring Swiss teenager, Belinda Bencic who plays Azarenka in the round of 16. If she gets past Azarenka, she will meet one of the Williams sisters.  Who has more experience mentally playing the Williams sisters but Hingis? All of 34 matches vs both, winning 17.

Roger Federer is also up against Bautista Agut. He has not lost a set yet in this tournament, as he aims to win his 8th Gentleman’s title. Can RFed win one more Grand Slam?

Young, Australian, Kyrgios will be up against Gasquet. Kyrgios has been creating a lot of excitement on the court.

May the best players win!