Check video out here! Congrats to the Warriors for heading to the Western Conference finals in style! 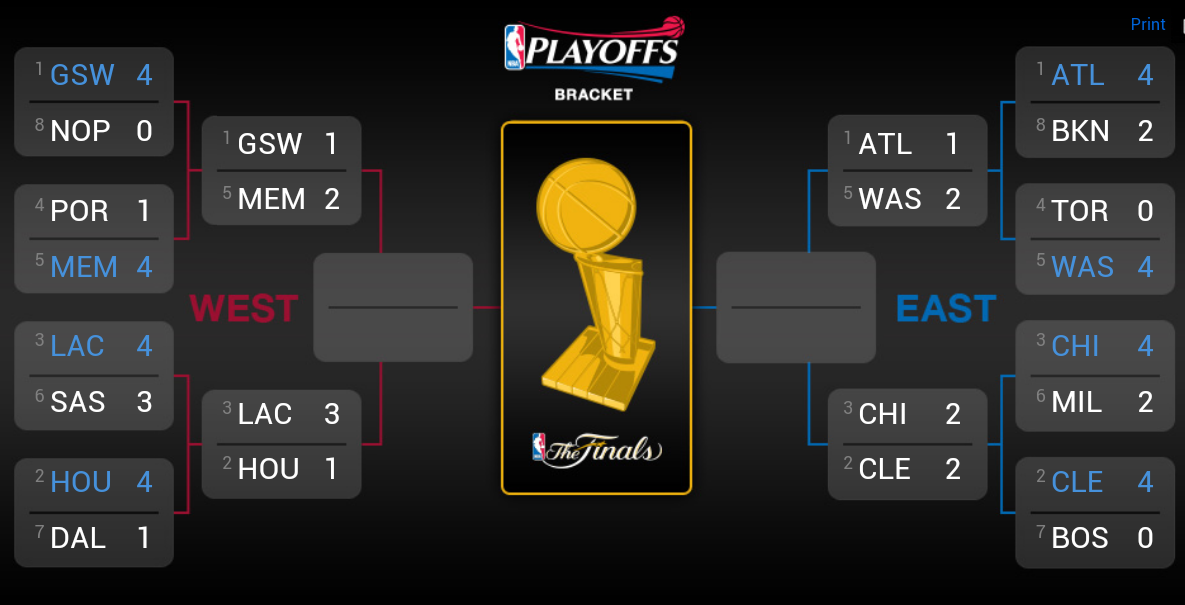 What is happening to the unguardable MVP, Steph Curry?! Has he met the best defense team in the league? A big part of the Grizzlies’ success has been Tony Allen, who, after an athletic diving steal from Klay Thompson in the 3rd quarter last Tuesday, kept shouting convincingly, ‘First-team all-defense!’. For the N.B.A. all-defensive team, voted on by writers and broadcasters, Allen was second team in 2011, and first team in 2012 and 2013. He was passed over last year and this year’s selections have not been announced as yet. The Grizzlies now have a 2-1 lead in the series.

The Bulls-Cavs series is now drawn at 2-2. The last 2 games have been won by buzzer-beaters. LeBron James missed the lay-up in the game Friday, then D. Rose hit the buzzer-beater, game-winning 3-point shot to beat the Cavs 99-96. Suga’s Play of the year nominee! Bulls led series 2-1 then LeBron James of the Cavs came back with a vengeance and worked hard for his Buzzer-beater yesterday to make up for the last game, beating the Bulls 86-84. Pau Gasol from the Bulls continues to sit out the game with a hamstring injury.

Paul Pierce of the Wizards also hit a buzzer-beater, a jump shot to beat the Hawks 103-101 on Saturday to lead the series 2-1 without John Wall who is still out with a hand injury.

Meanwhile, the Clippers are smoking the Rockets, burning down ‘the Cook’, Harden’s kitchen, with or without CP3. Despite a great team effort, Austin Rivers from the bench has been showing up big time along with starter, J.J. Redick. Last night they rolled to a 128-95 win over the Rockets to lead the series 3-1.

Tonight will be Wizards vs Hawks in Washington (2-1) and Warriors vs Grizzlies in Memphis (2-1).

We are getting closer to the Conference Finals! Who will it be?

The LA Clippers eliminated Defending Champs, the San Antonio Spurs in Game 7 last Saturday night in LA, 111-109. The game was well fought by the Spurs but they were still just a shadow of themselves. Props to the Clippers with the best starters in the league and having Griffin and CP3 really show up for them not only during the series but towards the end of the game when it mattered the most. The Spurs just failed to come into top form this season. They were nowhere near and imagine they were still so competitive. It was obvious they could not get a rhythm going and shooters, especially Danny Green, did not get fully into their zone as yet. Coach Pop made huge errors by taking out Marco Belinelli when he was hot in their must-win, Game 6 and scoring 3s were a struggle and also by not giving young, Patty Mills more play. Danny Green who has not been hot all series should have stayed out and Belinelli should have been given the opportunity to stretch the lead for the Spurs. Then Danny Green could return to defend the lead and facilitate more plays since that is not Belinelli’s forte. The old legs of those such as Tony Parker, have a lot of experience but the bench should have been given an opportunity to win Game 6 for them at home. Pop should not have worried about crushing egos if he was, because players like Tony Parker and Tim Duncan are so humble that they would have been genuinely happy for the bench winning Game 6, thus the series for them and furthermore would appreciate the rest. The odds were totally against them to win Game 7 in LA even though the home court advantage didn’t seem to matter for either team earlier in the series. Those few moments throughout the series when they played ‘Spurs ball’ with their on point ball movement and shot execution, they were untouchable by the Clippers. There is still no other team with that quality ball movement and it will surely be missed for the rest of the Playoffs. The Spurs have made it to the last 3 Western Conference Finals and last two NBA Finals. They have had a good run and hopefully they have more in them. Even though they were not at the top of their game, tremendous effort was shown and they were still able to entertain and be a force to reckon with. Chris Paul emotionally paid great respect to one of his idols as a kid, Tim Duncan at the end of Game 7 and Suga is sure the Clippers will reach the Western Conference finals to face the Warriors. The Rockets are a quality team and so are the Grizzlies, but even though the series promises some excitement, they may fall short.

The Grizzlies and Rockets are already down 1-0. The Clippers are surely on a high with a 117-101 win in the Rocket’s house last night with less than 48 hours rest and CP3 sitting on the bench with a hamstring strain. The Hack-a-Howard versus Hack-a-Jordan showdown has also begun. Who will learn how to shoot some free throws first?! My money is on DeAndre Jordan after his head start with the Spurs.

Oh wait, there is an Eastern Conference going on as well, almost forgot. The Wizards may upset the Hawks taking them to a Game 6 or 7. The Wizards rallied from a 12 point deficit in the 3rd to beat the Hawks in Atlanta, 104-98 in Game 1. The Cavs are likely to beat the Bulls even though the Bulls may jump out at them to a 2-0 start with the absence of their Kevin Love and J.R. Smith.  The return of D. Rose is a huge factor and should prove to be a competitive series. Despite Irving’s 30 points, the Bulls still beat the Cavs last night in Game 1, 99-92 with D. Rose scoring 25 points.

The Spurs-Clippers series may be the best match up that the NBA Playoffs 2015 will see, if not, it will surely be remembered and thankfully Game 7 saved last Saturday night, giving us the kind of entertainment we expected, which the Mayweather-Pacquiao fight failed to deliver.