Today marks the 4th anniversary of the passing of my father and former West Indies Cricketer, Basil (Shotgun) Williams.

How did he get the nickname, Shotgun?

As an opening batsman, he would always take a good look at the situation then pull the trigger, using his wrist to generate powerful shots that would echo around Sabina park, hence the name SHOTGUN.

Shotgun is in the history books as one of the elite few players to score a century on his debut with the West Indies. It was a series versus Australia in 1978, where he ended with 257 runs!

Shotgun was consistent and rarely misfired. He scored 111 versus the best of India in 1979 at Eden Gardens, Calcutta, matching skills with some of the very best in the game.

‘Williams about to be dropped in the slip. The bowler to suffer was Sheikh’ He was eventually caught at 87 runs in 1978 at Poona in India.

Basil played 7 tests for the West Indies between 1978 and 1979, that included two entertaining centuries. He had an impressive test average of 39.08 and an average of 36.02 in the regional first class game.

Cricket after the West Indies

Shotgun’s passion for the sport continued with his career in local cricket, including his Captaincy of the Jamaica Cricket team.

When did Shotgun retire?

Shotgun retired from the Jamaica team in 1986 on a high note and remained involved in the sport as a Selector, Board member, Team manager and of course had a few knocks in Club Cricket before he migrated to the US.

If he were alive today, what would he say to Chris Gayle?

Learn how to time the ball!

Continue to Rest in Peace Shotgun a.k.a CAP!

Shotgun’s first and only selfie with daughter, Gabrielle Burgess a.k.a Suga on October 20, 2014.

Why did Serena lose?

Serena Williams is usually the favourite in a Grand Slam final, no matter who she meets. This is so because she is the Greatest Player of all time (G.O.A.T) in the open era. Her total of 23 Grand Slam singles titles marks the record for the most Grand Slam tournament wins in the Open Era, and is second on the all-time list behind Margaret Court who has 24.

As Serena struggles to find her groove after having a baby and tries to play injury free at 37 years old, 24 Grand Slam titles is looking harder and harder to achieve.

On Saturday, Serena should have been the underdog. Simona Halep, also a former World no. 1, has been looking solid mentally and physically, playing the best tennis of her life. For years, Simona has had the physical ability to win, but seemed to have trouble following through mentally in Grand Slam Tournaments. After finally winning her 1st Grand Slam title last year at the French Open, it became more and more obvious that her focus and confidence were improving. For this Wimbledon tournament and final, she was mentally ready and physically fit to win.

Suga can’t say the same about Serena. It is the best Serena has looked since having her baby, but she is still not at the level of fitness she used to be and it is the 1st major tournament she hasn’t pulled out of this year due to an injury. She was just starting to get back into her groove, but was not ready to win versus an opponent of Simona Halep’s standard. She also got the easy half of the draw.

24 is still possible, but Serena wasn’t ready and I know she won’t be giving up any time soon.

Kudos and Congrats to Simona Halep for executing a brilliant win!

Why did Federer lose?

Federer did everything right and everything he could do at age 37. His movement showed no indication of his age and his serve was on point, but he just seemed to have lost this very important cat and mouse game, which happened to be the Wimbledon final. He would have been the oldest gentleman to win if he did.

Before the final, he was tied with Djokovic for tie-breaks, but Djokovic changed that by winning the 2 tie-breaks in Sets 1 and 3. So with the 1st Wimbledon Men’s final to ever reach a 5th set tie-break, Djokovic had the advantage to win. Also, with such a high percentage of net court points won, the miss Roger had by the net during the 5th set tie-break was pretty costly. Who knows what the outcome would have been if he made that shot?

Anyhow, this final ranks as one of the best finals I have ever seen. High quality tennis from the Greatest and 3rd Greatest Players of all time, with Federer on 20 Grand slams and Djokovic now on 16. It was a treat!

England won its first ICC Cricket World Cup defeating New Zealand at Lord’s in London yesterday in one of the most dramatic matches ever as it all came down to a Super Over!

England tied New Zealand’s score of 241 in 50 overs, resulting in a Super Over to determine the winner. A Super Over is when both teams play a single over (6 balls) and the team that scores the most  runs is declared the winner.

Ben Stokes and Jos Buttler batted first for England, while Jimmy Neesham and Martin Guptill batted for New Zealand. The result? Both scored 15 runs! So then what?!

England scored the most boundaries in the match, giving them the win!

Happy Monday Suga Bears and be Champions this week!

Congrats to our Jamaica Tallawahs for winning both CPLT20 matches at home at Sabina Park last Tuesday and Wednesday. They beat the St. Lucia Stars and Chris Gayle’s St. Kitts and Nevis Patriots. Perhaps Gayle should have never left.

Best of luck to the Tallawahs for the rest of the tournament! It continues in Florida and other islands.

Check out the CPLT20 Schedule here!

The weekend kicks off with the St. Lucia Stars vs. the Barbados Tridents tonight in St. Lucia at 9pm! 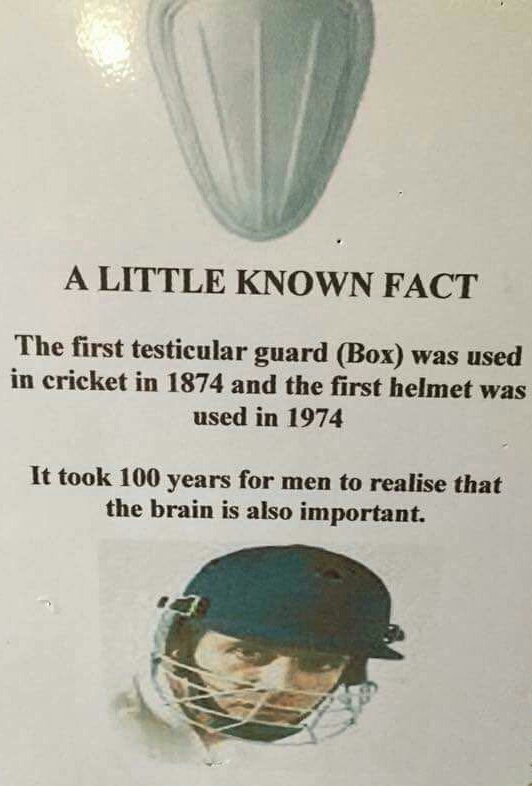 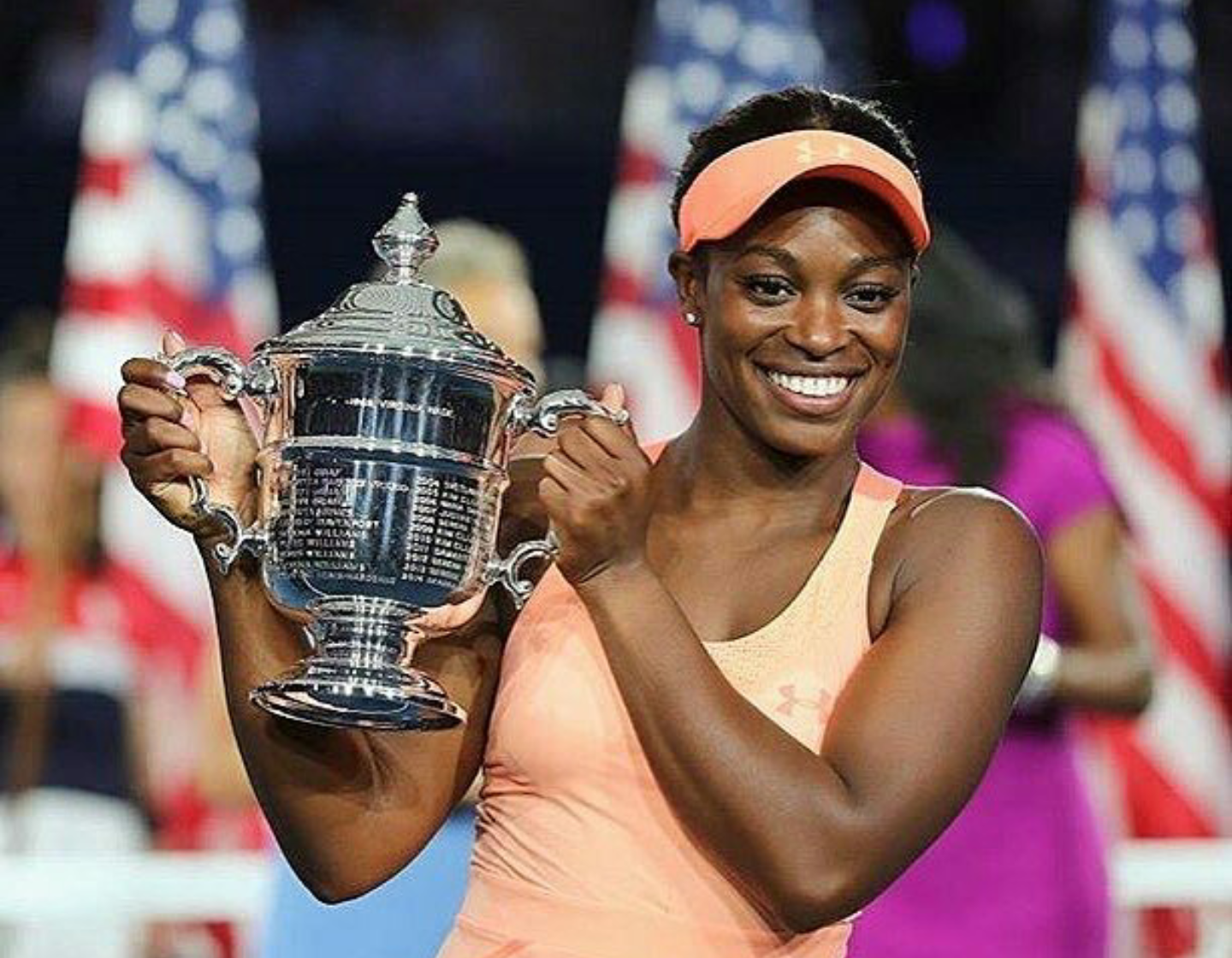 Stephens was fully zoned in throughout the entire match, making very few unforced errors. While the favourite to win, Madison Keys probably had her worse match of the tournament. Her serve that is usually powerful was only on point for the first game of the match and deteriorated quickly afterwards. Her usual accurate forehand created many errors, often overhitting the ball. A lot of pressure was on her to win this title as the better player and I think it got to her mentally and then physically. Her game was completely off and just did not come together.

Thankfully the two finalists are friends and embraced each other strongly at the end of the match.

For Stephens, after being out for so long with an injury, this must be one of the greatest comebacks ever in tennis history. Congratulations to Sloane Stephens and we hope to see more of you!

Yesterday, World no. 1, Rafael Nadal won his 3rd US Open Title vs. Kevin Anderson 6-3, 6-3, 6-4! This was Rafa’s 16th Major Title. Nadal played for his Sweet 16 with spectacular groundstrokes, net game and quickness that was just too much for Anderson to handle. Congrats Rafa!

The Trinbago Knight Riders knocked out the Guyana Amazon Warriors last night and are through to the Finals to meet Chris Gayle and the St. Kitts & Nevis Patriots this Saturday!

Who would have thought? It will be Sloane Stephens versus Madison Keys in the US Open Ladies Final tomorrow at 3pmET.

With Serena out, it has been anybody’s game.

Sloane Stephens showed she wanted to be in the Final more than ever last night, beating veteran, Venus Williams in an epic 3rd set. She beat Venus, 6-1, 0-6, 7-5. Her reach and movement was phenomenal.

On the other side of the draw, Madison Keys has been relentless and rolled over Coco Vandeweghe, 6-1, 6-2. 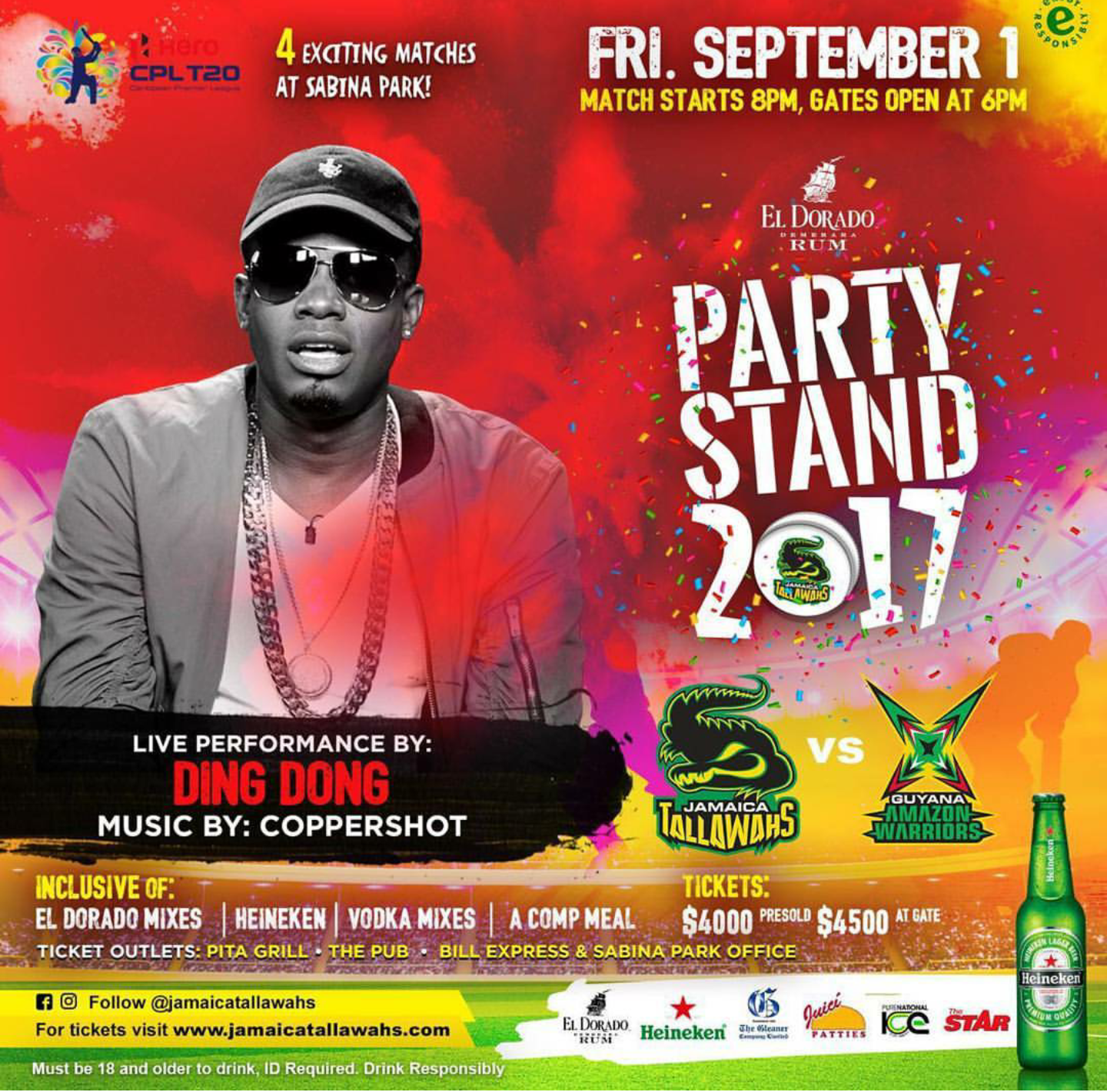 After the Tallawahs’ spectacular win over Chris Gayle’s Patriots, they are now 2nd on the Points table, with the unbeaten Trinbago Knight Riders at the top.

The final 2 matches before the Playoffs will be held in Barbados. The Playoffs and Final will be in Trinidad.

The Guyana Amazon Warriors are currently in the 4th spot and the Barbados Tridents are in 5th Spot. Darren Sammy’s St. Lucia Stars without a single win in the tournament so far, don’t have a chance.

So, expect the Warriors to fight to secure a spot in the Playoffs tonight, but our Jamaica Tallawahs are looking good! 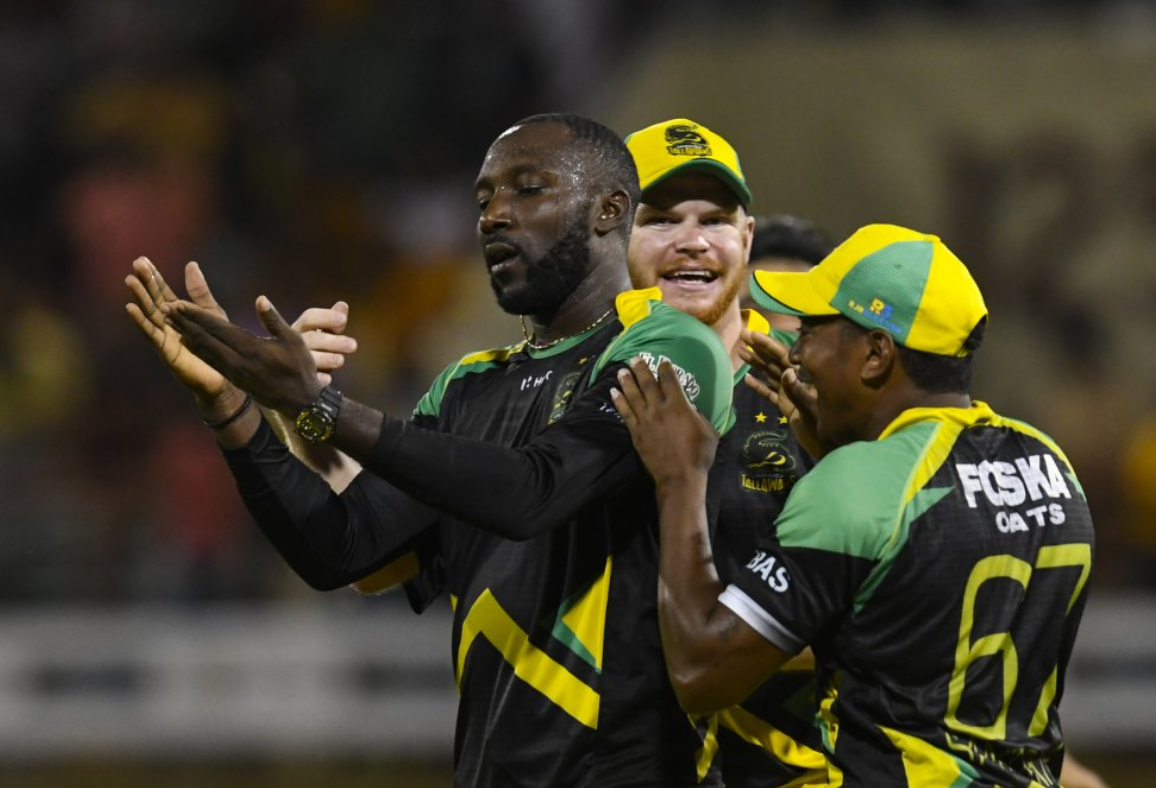 The Tallawahs are in Jamaica and so is CPL T20. Finally!

Jamaica Tallawahs with Lendl Simmons, Krishmar Santoki, Kumar Sangakkarra and more, will be playing the St. Lucia Stars with Darren Sammy, Marlon Samuels and more. The Stars have been on a losing streak at the bottom of the table. The Tallawahs are currently in 3rd place.

Other Matches at Sabina Park and Ticket Info: 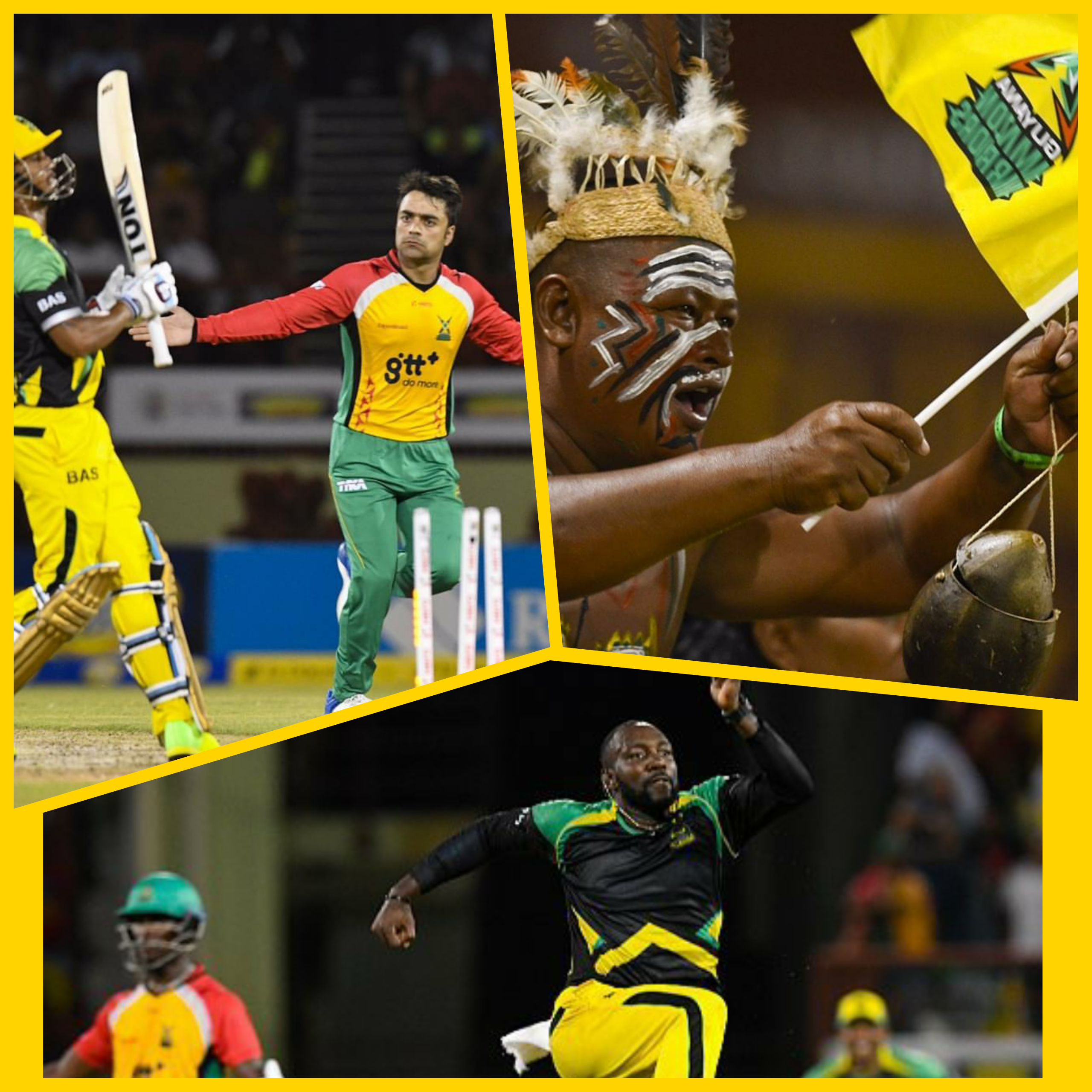 Refresh your memory on the teams and who has the potential to win from my previous update if you need to do so here:

Suga’s Match of the week

Last week Thursday, the Jamaica Tallawahs had an exciting match up vs. the Guyana Amazon Warriors. Tallawahs bowled them out for 128/7 and won by 2 runs! 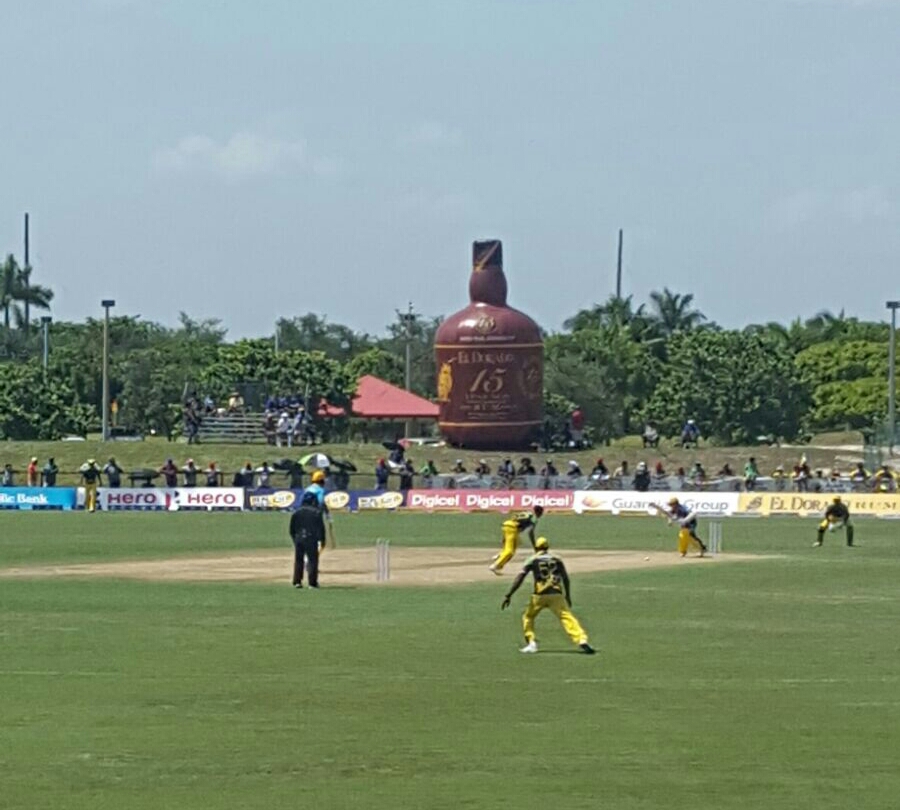 Don’t worry Cricket fans, I have not forgotten you.  I just feel a little left out since matches do not come to Jamaica until August 25th!

Florida got quite a few matches this year. My Kingston 21 Suga Bears should check out the Schedule! I know some went last weekend already.

Chris Gayle has left the Tallawahs for the St. Kitts & Nevis Patriots! What a tragedy.

We still have Wicket Keeper and Batsman, Kumar Sangakkara though.

We acquired one of the best bowlers in CPL T20, Krishmar Santoki.

We also have a good batsman, Lendl Simmons.

The Amazon Warriors have a lot of new faces like the Tallawahs.

The Patriots are coached by former West Indian Cricketer and Coach, Phil Simmons.

They are expected to do well.

How is it going so far?

Chris Gayle has the highest individual score of 66 for the Patriots.

Despite all the new faces, the Tallawahs have had a good start. They have the highest Team score of 154/5 and Mohammad Sami has the best Bowling figures of 12/4. Lendl Simmons is batting well too.

Kevon Kooper of the Knight Riders is the highest wicket taker with 6.